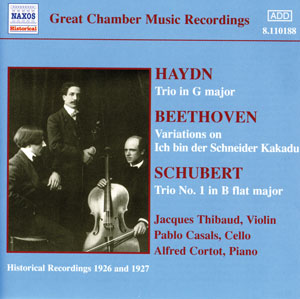 The original review of this recording from Gramophone, October 1926:

When the astronomer perceives through his telescope a triple star he knows that he is looking at a supreme example of celestial harmony. The musician, on the other hand, when he sees three musical luminaries shining close together, confidently predicts a cataclysm; for the musical star seldom resembles the heavenly one in anything but brightness. It is therefore pecuIiarly gratifying to find three first-magnitude stars such as Thibaud, Casals and Cortot combining for chamber music with all the orderliness of a sidereal system. I heard them play this trio about a year ago, and it was Schubert that mattered to each of them, not Thibaud, nor Cortot, nor Casals, and the result was a performance I shall never forget.

The rendering I have just listened to on these four records was substantially the same. I think they take the slow movement a shade faster in order to get it in on a couple of sides, and there may be other differences in detail; but on the whole I believe that the interpretation they give on the records is the interpretation they gave at the concert. Casals’s playing of the first strain in the slow movement and Thibaud’s treatment of the opening tune of the finale are as expressive and as finished as ever, and the details of the ensemble stand out with wonderful clearness. Peter Latham (10/26)

Rob Cowan Twenty-one years old when this indelibly memorable recording was made, the Thibaud-Casals-Cortot trio was both a melding of minds and a showcase for strong-minded players on a roll. Their pooled resources stoke the fires right from the off: Alfred Cortot both balletic and imperious, Jacques Thibaud sporting that unmistakably bittersweet tone (rather like Kreisler with a splash of citrus), and Pablo Casals voicing every phrase with eloquence, his sound pure mahogany, his decisive bowing and variegated vibrato compounding the magic. One ‘vintage’ cellist in particular springs to mind as a rival, and that’s Casals’s younger contemporary Emanuel Feuerman, who also recorded the B flat, many years later, with Jascha Heifetz and Arthur Rubinstein, a famous set involving three wonderful musicians which, for all its passing beauties (and there are plenty of those), could well serve as the ultimate example of the triple-tier power struggle such a line-up might imply. Here, though, the sense of animated conversation sets in even within the first minute, with excited exchanges between violin and cello from 0'22", a propensity for singing, not only from Thibaud and Casals, but from Cortot, too. And then at 1'40", the magic really begins when, at the foot of a diminuendo scale from Cortot, Casals enters with the lovely second subject, his approach approximating, in its fragile beauty, the tender vocalising of a great Schubert Lieder singer.

Tully Potter Rob, from our 21st-century standpoint it seems no surprise that the B flat Trio captivated gramophone listeners from the outset. But that it was recorded at all was a miracle. It all boils down to the nature of the work itself. Strangely, this sunny piece was not published until 1836, eight years after Schubert’s death and nine years after its companion in E flat. Robert Schumann wrote of the newly issued B flat: ‘A glance at Schubert’s trio, and all human commotion vanishes, and the world shines in new splendour.’ Thanks in large part to the 1926 discs, the B flat Trio became one of those works, like the Trout Quintet, which fed the vision of Schubert as a happy-go-lucky Biedermeier figure scribbling songs on scraps of paper. HMV did not get round to the E flat Trio until 1935 – when the Busch Trio did a fine job – and it has taken us almost until the present day to appreciate the tragic, angry dimension of Schubert. As you know, in 1926, electric recording was only a year old. Virtually no Schubert, or chamber music of any kind, was in the catalogues. In asking Cortot, Thibaud and Casals to record Schubert and Beethoven, Fred Gaisberg had an eye to the approaching centenaries in 1927 and 1928. In the event, he was partially frustrated, because Beethoven’s Kakadu Variations remained unpublished at the time; but the Schubert triumphed. Five out of the eight sides in the 78rpm set were first takes, just one factor that made it so special. No wonder American Columbia got Myra Hess into a studio at the end of 1927 to record a competing version with Jelly d’Arányi and Felix Salmond.

RC I wonder if fortunes had been reversed and it had fallen to the Busch-Serkin Trio to record the B flat while Thibaud, Cortot and Casals had been offered the more tragic E flat, what might have been bequeathed to us? I think the two pianists would have set the overall tone. Rudolf Serkin’s probing intellect especially suited the E flat whereas Cortot’s Gallic joie de vivre brings both charm and ebullience to the B flat. Would Serkin have been so blithely lyrical in the First Trio or Cortot taken us quite so far along the Winterreise route in the Second? Idle speculation of course: but it would have provided an interesting contrast with what we already have and treasure. But moving on to the wonderful Andante un poco mosso second movement, in those opening bars I’d always treasured Feuerman’s recording – still do; but listening again to Casals, where the movement of the bow is indiscernible either way, the tonal impression so touchingly vulnerable. . .there’s nothing quite like it. And the tearful duetting with Thibaud a little later on – straight from the heart, whereas in the lighter middle section, at the point where the veil gently falls and Schubert begins to question himself (around 3'51") – oh, perhaps I’m wrong, maybe this group could have been as effective in the E flat.

TP Your mention of joie de vivre, Rob, brings me to the essence of what makes this Thibaud-Casals-Cortot recording special. It is the sheer joy. The opening of the work is given a surge of irresistible exuberance. In my experience, only the Suk Trio has come near the joyfulness of Thibaud-Casals-Cortot, and as the Czechs managed it for both Supraphon and Denon, it confirms my feeling that you need an exalted state of grace for this piece. Cortot’s beautiful scales, Casals’s breathtaking introduction of the second subject, which Thibaud only intensifies, and the way the three men manage to relax without ever losing the thread, these are special. In the development the string players are totally in accord with each other and with Cortot, whose unique grandeur in places reminds us that the work was published as a Grand Trio. The whole thing has a freshness which is carried forward into the Andante. Cortot sets the barcarolle-like atmosphere and Casals’s tone is like a shower of gold, the portamento knitting the phrases. This is one of the few works of which we have two Casals recordings, and post-war he modified his portamento, mindful of changes in fashion. I prefer the 1926 Casals! Thibaud’s reply to Casals is ethereal, the string players’ tones carried on the breath like Caruso’s mezza voce. The more agitated central section brings Cortot further to the fore but the exchanges are still conversational. At the reprise, Thibaud is first with the barcarolle theme, and as the movement draws towards its close, violin and cello duet on equal terms. HMV moved the Scherzo out of its rightful place in the set, so that people could buy the Andante separately on Sides 5 and 6: even then, it was recognised as a gift from the gods.

RC Then there’s the catch-me-if-you- can Scherzo, brilliantly managed by this illustrious team, the two string players goading the pianist on before the key shifts and all three fly towards a repeated statement of the opening theme. The one place where I stay absolutely loyal to a major rival is in the Trio, where on the Heifetz-Feuerman-Rubinstein Victor version, Heifetz glides blithely in and around the principal theme, his tone as silken and intensely expressive as ever it was. At one point, Thibaud turns queasily sharp – not a major problem in the wider scheme of things, but a passing distraction. The finale opens with plenty of bounce, the gaily swinging second subject also given with a real lift. Cortot here offers a suggestion of the grandeur he brought to the first movement, a canny balancing act (I also love the way he jabs a supportive staccato at 3'32"), with Casals singing his heart out for the movement’s development section. It’s play all the way from there until the end, though Schubert’s sleight of hand never kids us into thinking that the light-heartedness is achieved at a bargain premium. It isn’t. This is ingenious dialogue with an argumentative edge, and these fêted virtuosos won’t allow you to forget that woven in among the laughter and magic is real gravitas. Such is their artistry, and it has been a real joy meeting up with the three of them again. It made me want to revisit their Haydn Op 73 No 2 and Beethoven Archduke – though, to be truthful, when it comes to thinking about those particular performances, there, as here, my memory never plays tricks.

TP Heifetz means ‘jewel’, and he is always ‘brilliant cut’, whereas I prefer the softer glow of a Thibaud, despite his occasional lapses. With the Scherzo, we hit one of the snags of 78rpm recording – the omission of repeats to keep the number of discs in a set to a minimum. All repeats are excised, so that we hear about half as much of this movement as on a modern version. But what we have is Elysian. A Scherzo Elysian? Well, Cortot is so rhythmically precise and all three are so deliciously in accord, with lovely tone from the pianist, that the effect is as light as Champagne. The tempo for the lullaby-like Trio feels just right to me, and the Scherzo reprise maintains the rhythmic delicacy.

And so to the finale, with Cortot and Thibaud setting a relaxed tempo. The little outbursts do not upset the thoroughly agreeable progress: as episode follows episode, the three keep an acrobatic balance between vertical poise and forward motion. Tempo changes are organic and the players seem to be making it all up as they go. The teasing tension is held until the final emphatic chords. It is a real performance.

A word about sound quality: despite the presence of three ‘recording experts’, the sound always had more distortion than was ideal – and in the Beethoven variations that were held back, it was really quite poor, even for those experimental times. But the Kingsway Hall acoustic wraps round the players nicely and the recording separates them so that you can always hear who is doing what. It seems that even in the presence of titans, perfection is always just out of reach. But is that not the human condition? Several modern transfers have brought Cortot, Thibaud and Casals before us with very creditable results. And musically, Gramophone readers cannot do better, it seems to me. We are indeed all beneficiaries of a kind of artistry that rarely visits this vexed world of ours.