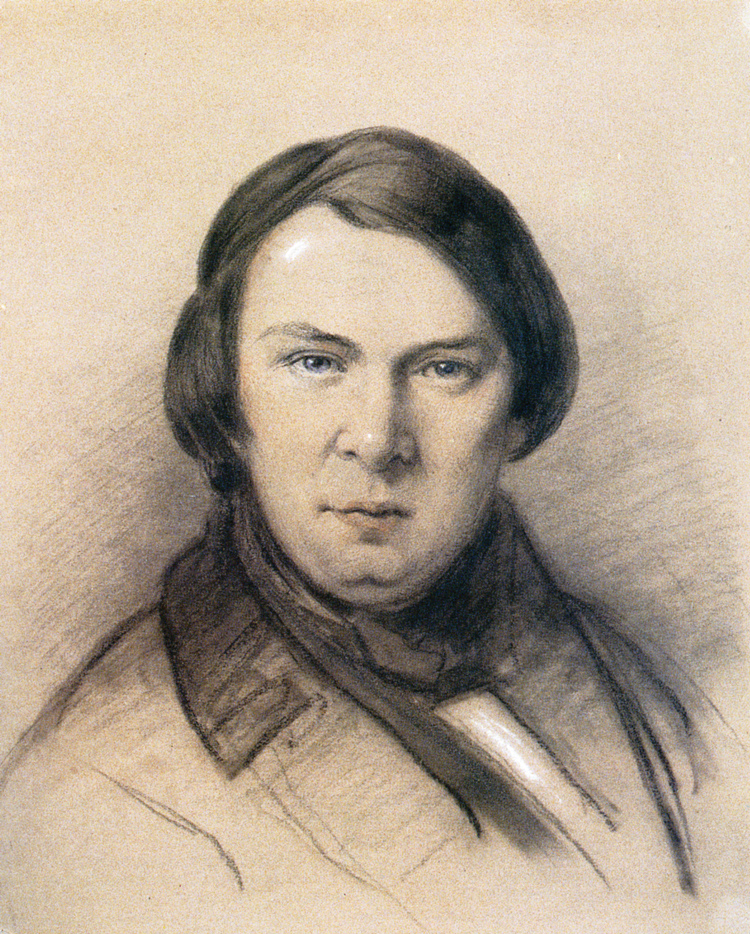 The year 1840, often called the Liederjahr (‘Year of Song’), saw an extraordinary outpouring of music from Robert Schumann, almost all of it song – no fewer than 138 in total. And standing out, head and shoulders above this expanse of miniatures, are five song-cycles, three of which the tenor James Gilchrist has recorded for Linn: both of the Liederkreis cycles as well as Dichterliebe, with his regular piano partner Anna Tilbrook. So, armed with a score of Dichterliebe, I went to visit him at his home in Cheltenham.

Dichterliebe was published by CF Peters, and the elegant frontispiece carries a dedication to ‘Frau Wilhelmine Schröder-Devrient’, the celebrated soprano who would later create the Wagner roles of Senta (The Flying Dutchman) and Venus in Tannhäuser. Are there any implications, I wondered, for male singers, in terms of transpositions?

‘Generally, music written for a soprano works perfectly for the tenor,’ explains James Gilchrist. ‘And interestingly, mezzos and baritones often don’t transpose the songs in Dichterliebe because the cycle’s tessitura doesn’t present too many problems. If I look at the original keys of Schubert and Schumann, I notice that the vocal tessitura is very different. I’d say that Schubert has a lighter, higher tenor voice and Schumann much more of a “bari-tenor”.’

When Schumann wrote Dichterliebe (‘A Poet’s Love’) he was separated from his beloved Clara. ‘They had some really, really difficult years behind them when Clara’s father was being more than awkward – he was really determined to separate them,’ explains Gilchrist. ‘Although Dichterliebe is a celebration of their happiness and their togetherness, it’s also a remembrance of the enormously difficult time they’d had when perhaps they both thought this wasn’t going to work and they wouldn’t be allowed to be together.’

Dichterliebe sets 16 poems by Heinrich Heine, published three years earlier. Schumann was acquainted with the poet, but didn’t know him well. ‘Both Robert and Clara met Heine at some point: Clara in Paris in 1839 and Robert a bit earlier in Munich. I find that rather fascinating as Robert usually set poetry of people he knew well.’

The cycle starts in an astonishing way – not so much starts as seems to continue a phrase that has been playing silently off-stage. ‘If you read the poem, it’s a sunny enjoyment of springtime – that’s what it’s saying. “My heart and my love life is in tune with the world around me and everything’s fine” – yet Schumann absolutely does not set it like that. He sets it in this faltering style, particularly so harmonically.’ Gilchrist points to the opening bars. ‘He starts it with a discord and you’re really unsure for the first bar or two which key you’re in – it certainly hints at a minor tonality with all those E sharps.’

Gilchrist likes to see the 16 songs in four groups of four, and each of these quarters has a different way of introducing the voice, something very evident when you compare the second and third quarters. In the fifth song ‘Ich will meine Seele tauchen’ and the one that follows ‘Im Rhein, im heiligen Strome’, the voice actually comes in before the piano; in the seventh, the voice joins very soon after the piano and in the eighth, they start together. But come the third quarter, the piano tends to have a prelude. ‘I sometimes joke that Dichterliebe is a piano work with optional vocal accompaniment,’ comments Gilchrist.

Schumann’s cycle often leaves songs tonally unresolved, or the tonality seems to lean towards the next song as if seeking some balance. Though we’re supposed to be looking at the score, it’s tempting to reflect on what’s not on the page – the gaps between these 16 songs. How easy are they to gauge? ‘It is difficult,’ Gilchrist concedes, ‘and that’s particularly so when it comes to recording because in a performance you’re there and you have to go from the beginning to the end and you can really judge the gaps as they come. I’m always fascinated that each time Anna and I perform this piece – and we’ve done it a great number of times – the gaps will be very different from performance to performance.’ 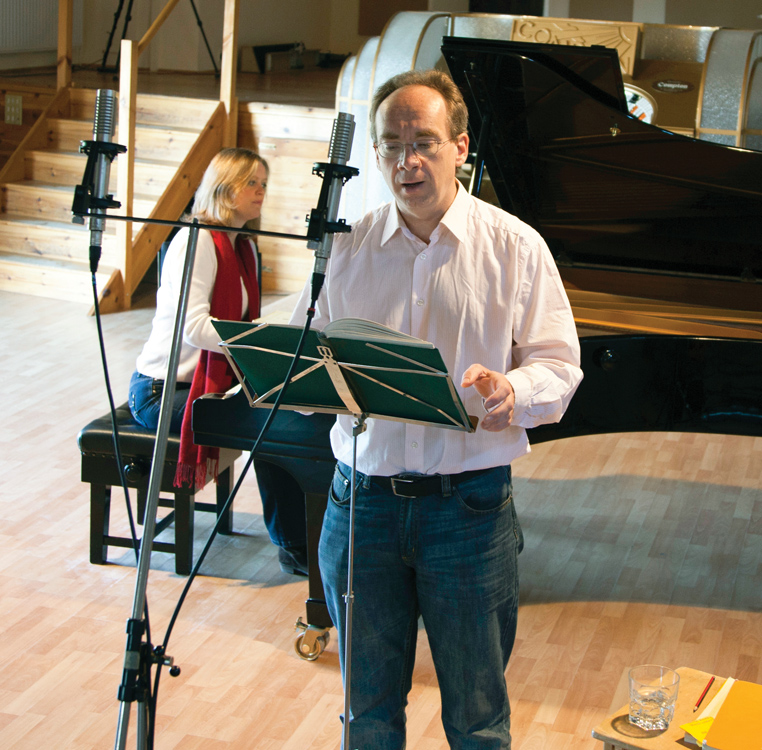 The most famous song in the cycle is ‘Ich grolle nicht’ (No 7). ‘It goes down to a bottom C and quite a lot of it lies pretty low,’ Gilchrist notes. ‘I feel that he’s deliberately written it at the bottom of the register so it’s weak. The poem says “I’m going to bear this grief”, as it were, and it underpins how he’s not being true to himself. Schumann takes it down, forte, to a bottom C, which is going to be weak, even for a soprano.’

If the first four songs of the cycle maintain a tone of happiness filtered through memory, the second four see despair setting in – in ‘Im Rhein, im heiligen Strome’, as Gilchrist points out, Schumann even changes Heine’s words. ‘“Im Rhein, im schönen [‘beautiful’] Strome” is what Heine wrote, as set delightfully by Liszt, but Schumann’s has “heiligen [‘holy’] Strome”, and this more serious, darker word chimes with the bell-like motifs and gothic architecture of the song – stamping out all hope. As time goes by, my interpretation of this song gets darker and darker.’

The third quarter ‘is bitterness and bile’ in Gilchrist’s view. ‘“Hör’ ich das Liedchen klingen” [No 10] has the voice entering late in the song, and the prelude ushers in Schumann’s characteristic rhythmic ambiguity. The haunting melody is delayed by a semiquaver. In the postlude, the cascading echoes of melody are further displaced. This is entirely a piano song. The song she used to sing echoes around him. He joins, speaks and fades into the melody of the piano. In the postlude we get an impassioned cascade of “Clara themes”.’ This motif – at its simplest – uses the C [L] A [R] A of her name and, here, interposes B and G sharp between.

‘In the fourth quarter, we’re in a totally unreal place,’ says Gilchrist. ‘All of a sudden there’s mention of dreams and of fairy-tale land and I don’t think it’s an accident.’ The long postlude that concludes ‘Am leuchtenden Sommermorgen’ [No 12], ends on the same note that opens song No 13, ‘Ich hab’ im Traum geweinet’, which begins with ‘the voice totally alone – and that’s quite unusual in song repertoire of the period. I can’t think of many songs that do that. The score is so full of empty space. It’s really arresting and quite unnerving.’

The final song, as Gilchrist points out, ‘directly addresses the listener. The voice finishes with quite a short note but the piano is left, with the same chord, just ringing on and you wonder what’s happening. Then comes this unusual cadence into some sort of luscious harmony as we remember the melody we heard before and which becomes more drawn out as if in a memory. I think we are feeling some connection to Clara – the wistfulness is there but the melody seems to be joining them together. This ending brings the cycle to a close and leaves us almost as we began – in a wistful remembrance of the happy times that went before.’

‘Oh my Clara, what bliss it is to write songs. I can’t tell you how easy it has become for me…it is music of an entirely different kind which doesn’t have to pass through the fingers…I should like to sing myself to death, like a nightingale!’

‘The inspired peroration to Dichterliebe is not imbued with tear-choked retrospection…No longer a reflection of self-pity, it is a new structure; there are moments of nostalgia, but they are gentle with a fragile beauty.’

‘It is clear for Schumann that [‘Ein Jüngling liebt ein Mädchen, No 13] could not exist outside the cycle. It is, in its angular and banal insistence, a deliberately bad song, but magnificent in its place.’ 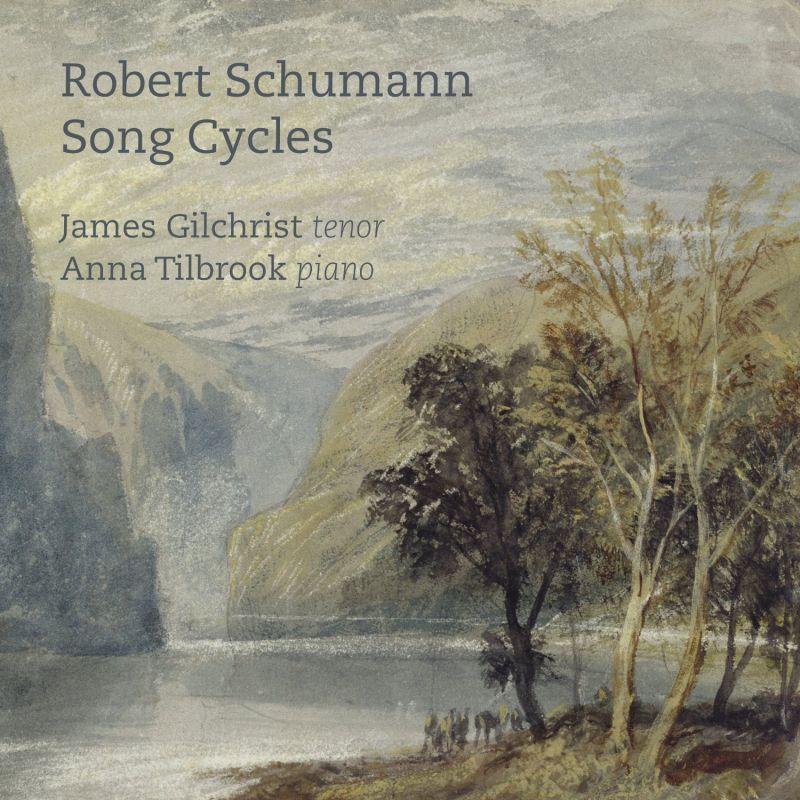 'His Dichterliebe is the cycle of a kindly poet, who recounts sweetly the age-old tale of the boy who loves a girl (no bitter lesson being learnt here) and shapes phrases that gently unfurl in the light of a summer morning. In all this he is well supported by the clean-cut, carefully detailed playing of Tilbrook, who modestly leaves any point-making to the singer...' Read the review

A journey inside Schumann's concertos and trios with Isabelle Faust, Alexander Melnikov and Jean-Guihen Queyras

Faust, Melnikov and Queyras are seeking to change perceptions of Schumann by recording the trios and concertos on period instruments, finds Harriet Smith... Read more

The complicated musical genius of Robert Schumann, by Steven Isserlis

Schumann remains one of the most misunderstood of all composers. Cellist and Schumann devotee Steven Isserlis peers behind the myths... Read more

This article originally appeared in the 2015 Awards issue of Gramophone. To find out more about subscribing to Gramophone, visit: gramophone.co.uk/subscribe