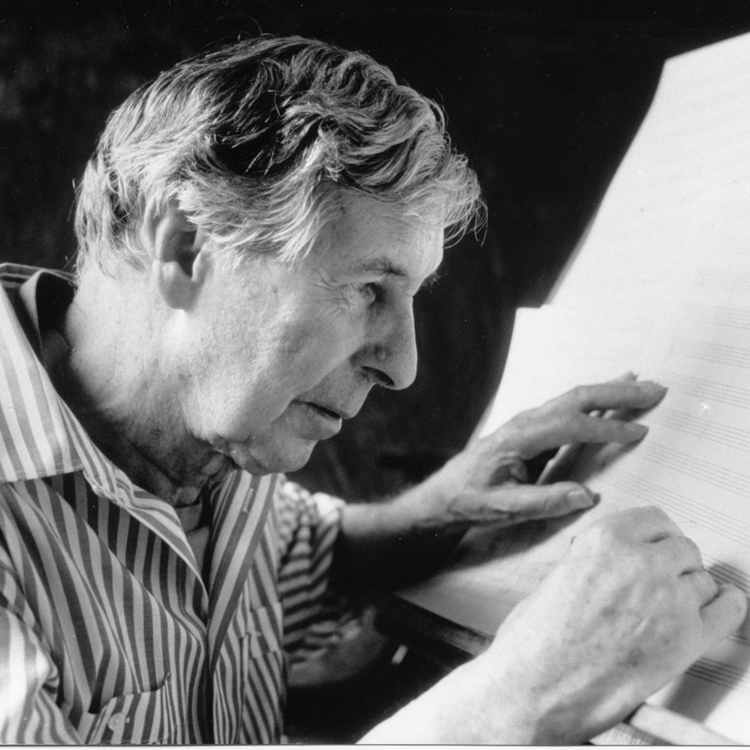 The English composer Sir Michael Tippett died on January 8, aged 93. He embarked on a musical career relatively late and did not attract much public attention until he was nearly 40. He forged a highly original musi­cal style through his characteristic rhythmic language and complex tonal harmony. His output spans all the principal genres and often reflects and articulates the composer's own preoccupations with personal, social and philosophical issues.

He was born in London on January 2, 1905. His father spent most of his working life as an entrepreneur and his mother was closely associated with the suffragette movement. Apart from piano lessons, he had no musical training during his childhood, but by the age of 10 he had decided to be a composer. In 1923 he entered the Royal College of Music, where he studied composition under Charles Wood and CH Kitson, though he maintained that he learnt most about orchestral writing by observing Boult's senior conducting class at the college every Friday for four years.

While still a student, in 1924, Tippett became the conductor of a small choral group in Oxted, Surrey, with a view to exploring the English madrigal repertory. He subsequently arranged that his singers should collaborate with a local dramatic society in operatic ventures. In 1929 Tippett accepted an appointment as a French teacher at Hazelwood School. He continued to teach part-time until 1934 and remained in the Oxted area until 1951. 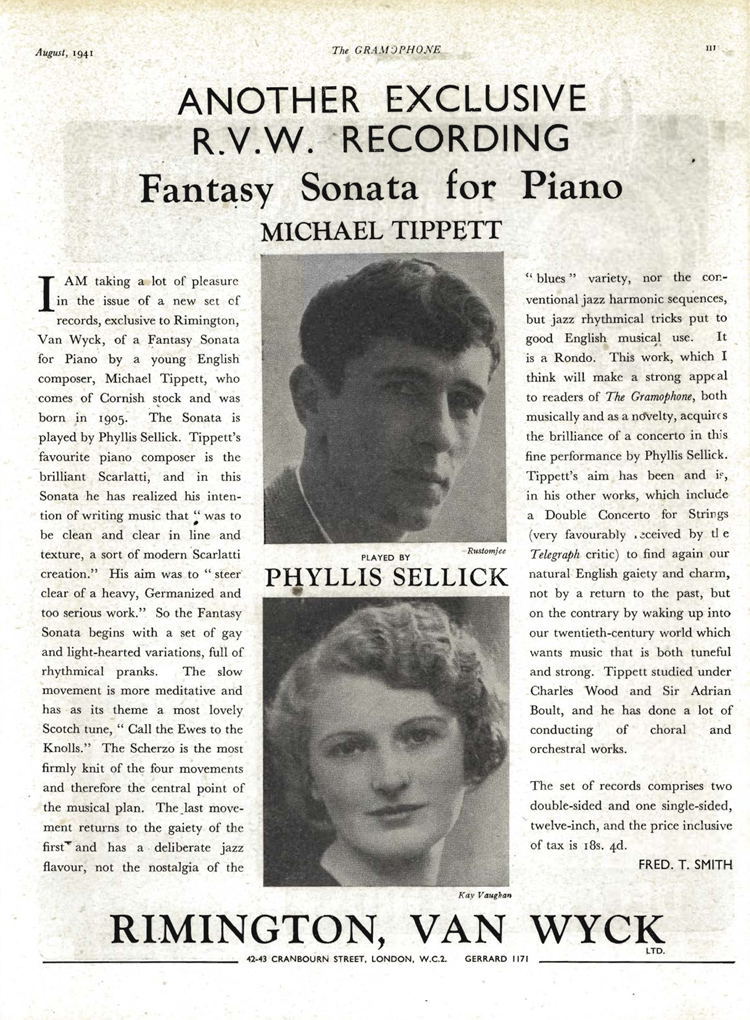 Between 1930 and 1932 he studied fugue and 'free composition' with RO Morris. Soon afterwards he took charge of music at a work-camp in the East Cleveland district of north Yorkshire. A successful performance of The Beggar's Opera at Boosbeck in 1933 led him to write a ballad opera of his own, Robin Hood. The work-camps also had a political importance for him in that they strengthened his left-wing views. He became Trotskyite in his sympathies, espousing a pacifist rather than a political stance as the realities of communism and fascism became apparent. The Nazi pogrom in November 1938 inspired his oratorio A Child of Our Time - to the composer's own text - which uses Negro spirituals as pillars within the musical structure.

Efforts to provide activities for the unemployed were concentrated on Morley College, where Tippett had since 1933 conducted what became the South London Orchestra. That body of musicians, which premiered his first mature work - the Concerto for Double String Orchestra - disbanded in summer 1940. Later in that year, Tippett was appointed Director of the College, an institution he made central to musical activities in London. His concert series, emphasizing early music, became the most enterprising in Britain, and his 'discovery' of Alfred Deller led to a renewal of interest in the countertenor voice. 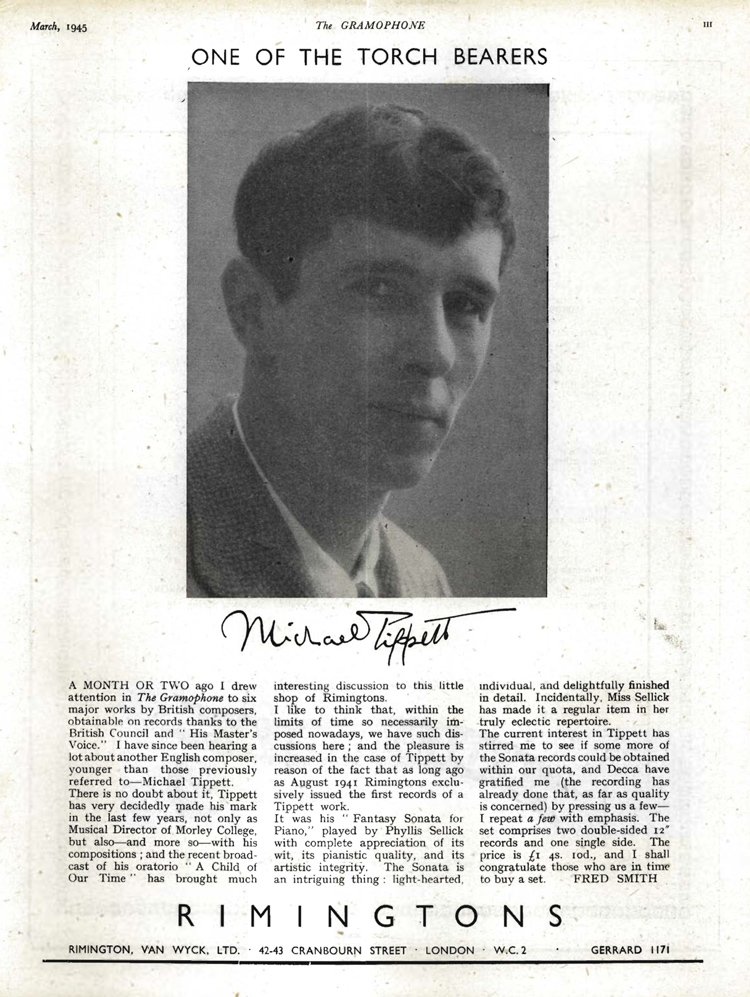 In November 1940 Tippett joined the Peace Pledge Union and when his call-up papers arrived he registered as a conscientious objector. His refusal to undertake the work assigned to him for the war effort, on the grounds that he could better serve his country as a musician, resulted in his being given a three-month prison sentence in June 1943.

Tippett resigned from Morley College in 1951. Thereafter he worked as a broadcaster and conductor. In 1959 he received a CBE, in 1966 was knighted and in 1979 was honoured with a CH.

Tippett's earliest acknowledged work was his String Quartet No 1 from 1934-5; the first to gain wider circulation was his Piano Sonata No 1 of 1938, which appeared on record in 1941. Only with the premiere of his oratorio A Child of Our Time in 1944 was his stature as a composer recognized. His Second Quartet had meanwhile impressed musicians with its originality and sureness of touch. 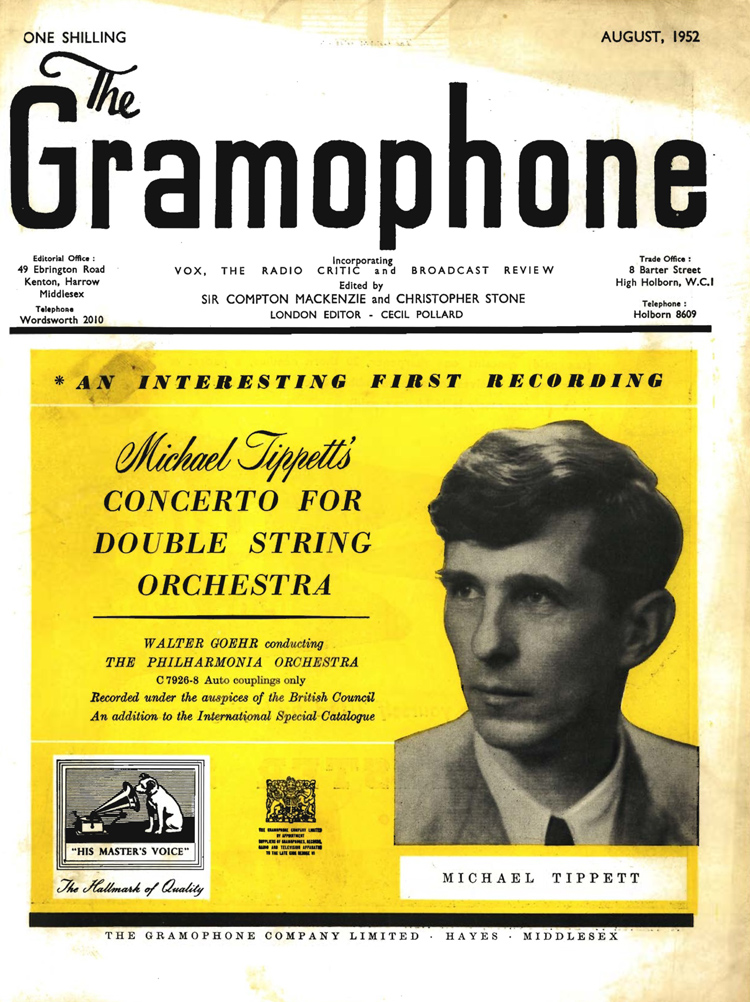 However, the complexity which stemmed from Tippett's receptivity to different influences proved confusing. A symphony (No 1, 1944-5) - successor to an earlier effort the composer had withdrawn - and The Midsummer Marriage, Tippett's first opera (1946-52), baffled audiences. Musicians, too, found his music difficult: Julius Katchen declared that he could not make sense of the Piano Concerto (1953-5), and the players who in 1958 premiered the Second Symphony under Boult broke down after two minutes. Tippett attempted to clarify matters in a number of articles and broadcasts, some of which were published as Moving into Aquarius(London: 1958) and Music of the Angels (London: 1980).

By the time of King Priam (1958-61) the idiom is simpler and more economical in its means. Almost everything about it is the opposite of The Midsummer Marriage: instead of an original libretto the work has its basis in Homer; instead of giving encouragement it focuses on conflict and the dead hand of fate; the singing style is declamatory not lyrical; the orchestra is split up into small autonomous ensembles and emphasizes winds rather than strings; harmony is dissonant rather than euphonious. Most importantly, development is rejected in favour of sharply differentiated structural units.

All later works are indebted to King Priam. In instrumental pieces Tippett began to move away from evolutionary structures that reach a conclusion. The Concerto for Orchestra (1962-3) relies on many distinct gestures and its three movements end inconclusively. A similar stasis characterizes The Vision of Augustine (1963-5), where it conveys a mystical sense of timelessness. 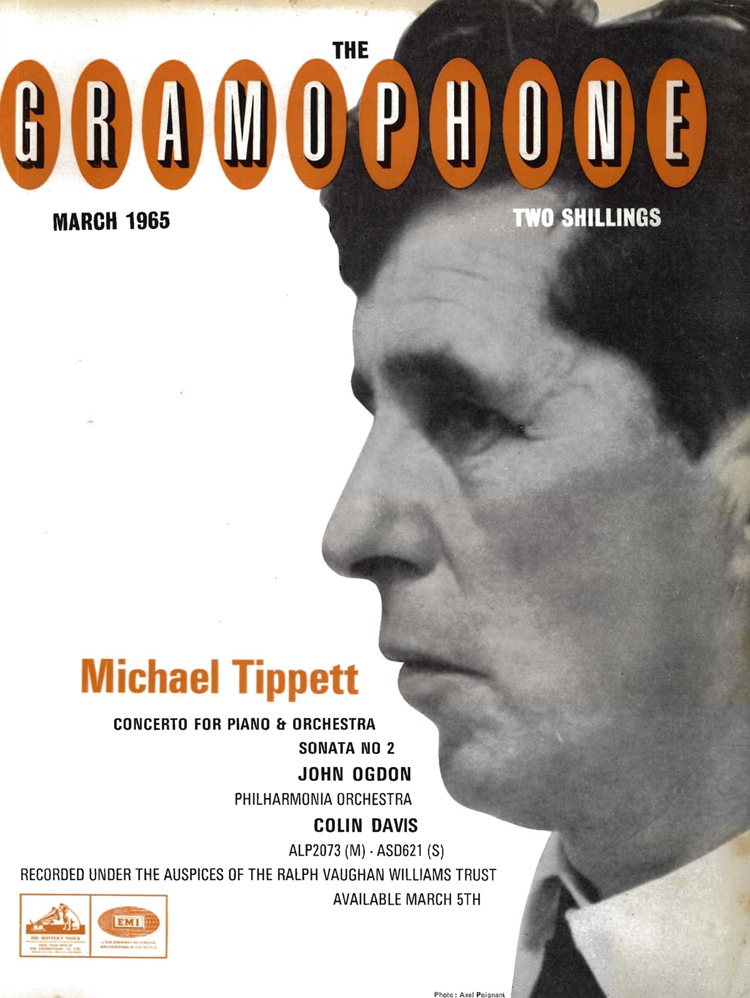 The Knot Garden (1966-9) gives a stylized portrayal of human interaction. It uses a 12-note theme to represent fractured relationships and harks back to A Child of Our Time in its employment of blues and boogie-woogie.

The Ice Break (1973-6), like The Knot Garden, consists of fragmentary scenes in which archetypal characters confront one another, but the musical style is now more angular. The composer alludes to diverse strands of high and popular culture and, in particular, the blues, which are here associated with human warmth in a time of danger and uncertainty.

The opera New Year is a modern morality tale set in an American city. The score, completed when Tippett was 84, uses electric guitars and saxophones to introduce a rock idiom which the composer absorbs in his own. The work was first performed by Houston Grand opera in 1989.

Between The Ice Break and New Year came A Mask of Time, which is dramatically conceived for soloists, chorus and orchestra. The bi-partite text, by Tippett himself, draws on Milton and Shelley.

Tippett said that the orchestral tone-poem The Rose Lake would be his final work. It had its first performance in his 90th birthday year at a festival of his music at the Barbican titled Vision of Paradise.

Tippett's output also includes the Fantasia concertante on a Theme of Corelli (1953), two further symphonies (No 3, 1970-72, and No 4, 1976-7) and the Triple Concerto (1979). He produced three early quartets and then none for more than three decades until his Fourth (1977-9). The Fifth was premiered by the Lindsays in 1992. The four piano sonatas, however, are more evenly spread throughout his career.

Tippett's works have featured on a number of distinguished recordings. King Priam, on Decca (now reissued; Chandos, 2/96) and conducted by David Atherton, has Norman Bailey and Robert Tear well contrasted in their complementary states of anguish and resolution; and A Mask of Time gave rise to one of the best products of the Andrew Davis / EMI partnership (5/87). Both recordings won Gramophone Awards, as did that of the Triple Concerto (1982-3 Record of the Year; reissued on Philips, 3/89 - nla) and Tippett himself (Lifetime Achievement, 1995).

Describing his friendship with Tippett as 'the most privileged of my life', Peter Cropper, first violin of the Lindsay Quartet, writes: 'The most important aspect for me about Sir Michael was his sense of vision. He did not always write in the most practical way, but even the difficulties that we players encountered seem to be part of the struggle of life that his music so powerfully embodies. The Lindsays went to his house many times and played all five quartets to him. His energy and relish of life, which comes out in his music, was also there in those rehearsals. I always came away uplifted, wanting to portray his extraordinary humanity, through his quartets, to audiences throughout the world. It was like carrying a torch for someone who was prepared to share their soul with the rest of mankind.

'I shall always remember him for his boyish sense of humour and his infectious laugh. I remember one time, when he laughed so much, that he lifted his legs over his head and touched the wall behind him. I will miss him greatly, but I believe sincerely that his music will open the hearts of many generations to come. His vision will inspire composers and performers in the next millennium.'

Tippett's A Child of Our Time – which recording should you buy?

A Child of Our Time was Tippett’s reaction to tragic events that changed the course of world history. Geraint Lewis traces the genesis of this modern classic and follows its progress on disc... Read more