Giacomo Puccini's opera La bohème was premiered in Turin in 1896. Here are our recommended recordings of the celebrated work. 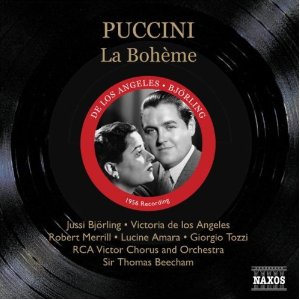 The disadvantages of this famous Beecham Bohème are obvious. It’s a mono recording and restricted in dynamic range. The sense of space for the complex crowd scene of Act 2 is to emerge with the maximum impact is inevitably lacking; the climaxes here and elsewhere are somewhat constricted; no less important, it’s sometimes harder to focus on the subtleties of Puccini’s orchestration. It was also made in a great hurry, and this shows in a number of patches of slightly insecure ensemble, even a couple of wrong entries. But there’s no other important respect in which it doesn’t stand at least half a head (often head and shoulders) above its more recent rivals. Nobody has ever been so predestinately right for the role of Mimì than Victoria de los Angeles: right both in vocal quality and in sheer involvement with every word and every musical phrase that Mimì utters. Beyond a certain point (usually a certain dynamic level) most sopranos stop being Mimì and simply produce the same sound that they would if they were singing Aida or Tosca. De los Angeles rarely does this; even under pressure (and Beecham’s unhurried tempi do put her under pressure at times), the very difficulties themselves are used as an expressive and interpretative resource. Hers is the most moving and involving Mimì ever recorded.

And Björling’s is the most musical Rodolfo. He has the reputation of having been a bit of a dry stick, dramatically (on stage he looked like the other Bohemians’ elderly, portly uncle), but on record he’s the one exponent of the role to be credible both as a lover and as a poet. His voice is fine silver rather than brass, it can caress as well as weep, and his love for Mimì is more often confided than it is bellowed for all Paris to hear. This, indeed, is one of the most conspicuous differences between Beecham’s account and most others: its simple belief that when Puccini wrote pp he meant it. Beecham (whose spell over his entire cast – in which there’s no weak link – extends as far as teaching his Schaunard, John Reardon, an irresistibly funny, cut-glass English accent for the parrot-fancying milord) makes one realise what an intimate opera this is, how much of it is quiet, how many of its exchanges are sotto voce, and he thus enables his singers to use the full range of their voices and to employ subtleties of colour, phrasing and diction that are simply not available to a voice at full stretch (and in the process he largely cancels out the disadvantage of his recording’s restricted dynamic range).

It’s the same with his handling of the orchestra: one would expect Beecham to seem understated, but again and again one turns back to his reading and discovers nothing missing – he has achieved as much or more with less. This is as complete a distillation of Puccini’s drama as you’re likely to hear. (The EMI recording is currently deleted as a CD, but available to download; the Naxos and Regis sets may not been available in all territories due to copyright restrictions.) 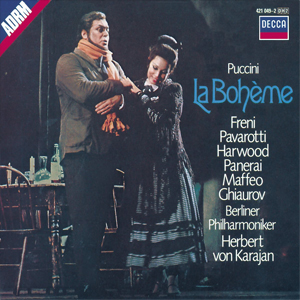 Pavarotti’s Rodolfo is perhaps the best thing he ever did: not only the finest recorded account of the role since Björling’s on the Beecham set, but adding the honeyed Italianate warmth that even Björling lacked. He couldn’t quite match Björling’s poetic refinement, and he was less willing to sing really quietly, but Pavarotti’s sincerity counted for a great deal: his pride as he declares his vocation as a poet, the desperate feigning of his ‘Mimì è una civetta’ are points that most tenors miss or treat as mere opportunities for a big sing. His latter-day image may tend to hide it but this recording is a reminder that Pavarotti was an artist of intelligence and delicacy as well as splendour of voice.

His Mimì, Freni, sings beautifully and sensitively. Panerai is a strong, vividly acted Marcello. Harwood is an interesting Musetta: her tiny narration, in Act 4, of her meeting with the stricken Mimì is a gripping moment, and her waltz-song in Act 2 is a passionate (and irresistible) avowal to Marcello. Karajan is a great Puccini conductor who can linger over the beauties of orchestration without losing his grip on the drama or relaxing his support of the singers. There aren’t many operas of which a better case can be made for having more than one account in your collection. For a more modern La bohème to supplement the Beecham, this Karajan set must go to the top of the list. 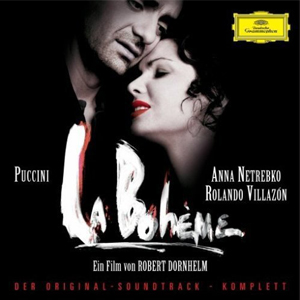 Vividly recorded, vigorously conducted and sung by a distinguished cast still in their relatively youthful prime, it presents the score with an appeal that will be readily felt by newcomers and with a freshness that will make those of riper years feel…well, feel young again.

Act 1 moves quickly up to Mimì’s entry. The vigour is not brash or wearing – there are moments of respite – but it is conducted as a symphonic unit, a first-movement allegro giocoso. The love music takes its natural pace, though it adds a silent beat immediately following Mimì’s solo and another before the start of ‘O soave fanciulla’. The second act registers clearly as a symphonic scherzo, or, in this arrangement where you play the first CD without a break, as an extended Mozartian finale. The various elements – the main solo group, the Christmas Eve crowd, the children (in splendidly disciplined high spirits), the stage band – are all well defined and the great ensemble runs its joyful course so that we can almost feel ourselves to be part of it.

Among the singers, it is important that Marcello has the presence and gaiety to be the life and soul, and Boaz Daniel has all of that. Stéphane Degout as Schaunard may be a little too like him for the purposes of the recording but is lively and stylish. The Colline, Vitalij Kowaljow, is less effective. The lovers Anna Netrebko and Rolando Villazón are a famous pair and deservedly so. His voice is richly distinctive, his style genial and ardent. Netrebko is pure-toned and ample in climaxes. As Musetta, Nicole Cabell shows many of the qualities of a well-cast Mimì – might Netrebko (a little solid and sturdy in vocal character for the Mimì of these acts) not have made a brilliant Musetta, as Welitsch did?

In the remaining acts no such qualms arise. Netrebko sings with feeling and imagination, and Villazón is an inspired, golden-voiced Rodolfo. In fact, these are as finely performed as in any recording. The orchestra play almost as though reading a supplementary libretto, so vivid is their commentary. This is a recording which takes its place alongside the acknowledged ‘classics’. 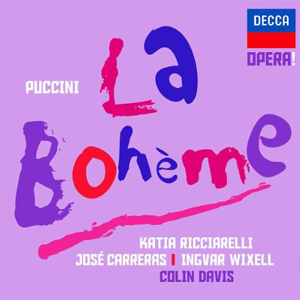 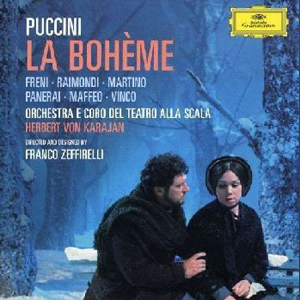 Dating from 1965, this is a thoroughly old-fashioned opera film. As was often Karajan’s practice, the singers mime to their own pre-recording, not always in perfect synchronisation, and to see an ample fortissimo phrase launched with apparently no effort at all is disconcerting. Zeffirelli’s La Scala sets have been reproduced but amplified for the purpose of filming, and the joins between ‘real’ and painted fence in the Barrière d’Enfer scene, for example, are very obvious. The lighting is often most unconvincing when the action is so would-be naturalistic: a single candle can fill the stage with light, and the proverbial blind man with half an eye would have no difficulty in finding Mimì’s dropped key.

And yet it’s as near an ideal Bohème as you could hope to find. Firstly because there are no ‘guest artists’ – this is La Scala’s Bohème cast of the period; all are at home in this production and with each other – and all are believably young or youngish Bohemians. Mirella Freni was near the beginning of her international career, her voice at its freshest, and her acting is all the more affecting for its restraint: a downcast glance, a shy smile. Gianni Raimondi partners her very well and sings with elegance and ardour. Rolando Panerai is an immensely likeable and finely sung Marcello, Gianni Maffeo hardly his inferior as Schaunard and Ivo Vinco is a tow-haired, cheroot-smoking young philosopher. Adriana Martino’s Musetta is, if you like, conventionally tarty in her vivid scarlet décolleté gown, but she sings charmingly. Karajan sounds as though he’s enjoying himself thoroughly, never pressing the music or his singers too hard, quite often indulging both with a rubato that encourages long and eloquent line. The recorded balance is at times peculiar: Rodolfo’s friends are evidently in the street below when they urge him to hurry, but they must have climbed the fire escape to comment ironically that he has ‘found his poetry’ in Mimì. The lovers sound properly offstage at the end of Act 1 but they’re quite visibly on it, in the doorway. But even these little flaws are oddly endearing; this is definitely a Bohème to live with. 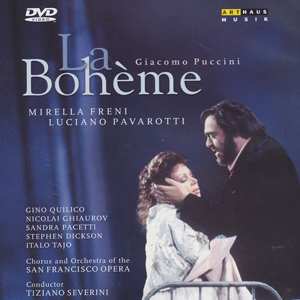 The staging is traditional in the best sense, even if it can’t rival the great Zeffirelli/La Scala production, also with Freni (reviewed above). Brian Large has his cameras in the right place at the right time, with a fine balance of distant and close-up shots. One can share John Steane’s enthusiasm for the restraint and experience of Freni and Pavarotti, who (even in 1988, when the performance took place) didn’t look like the young lovers predicated by the libretto, but who made up for it with the ‘rich humanity’ (JBS’s words) of their portrayals. Ghiaurov, at 59, remains a tower of strength as Colline, although his voice sounds a shade rusty. 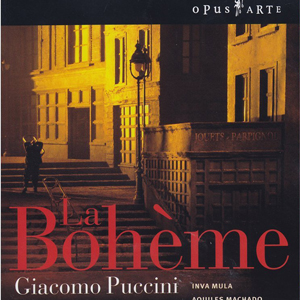 This Bohème is a glorious vindication of traditional staging at its imaginative, recreative best. Giancarlo Del Monaco here turns his attention to the work and comes up with a humdinger of a production. In the pit López-Cobos’s experienced hand is at all times in evidence. Centre stage is Inva Mula’s appealing, vulnerable and intensely sung Mimì (justly given a tremendous ovation at the close). At first glance, Aquiles Machado hardly fits one’s idea of a romantic poet but he lives Rodolfo with so much feeling and identification with the role that doubts are banished, and there is much sensitivity and passion in his singing. 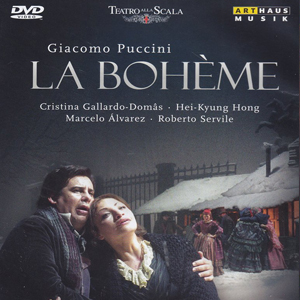 This La Scala production is particularly good at capturing the Christmas spirit in the Latin Quarter and the snows of a wintry dawn at the Barrière d’Enfer. But that’s Zeffirelli. It’s beautiful to look at, meticulous in detail, and true to the score and the book. Vocally we’re, let’s say, a little lower than the angels. But nothing seriously spoils the joy of this. The sound is fine, and team-working among the Bohemians has the combination of precision and apparent spontaneity which betokens inspired and thorough rehearsal. The orchestral playing under Bruno Bartoletti carries an assurance that never lapses into mere routine.