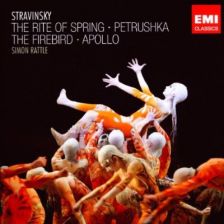 Recordings of The Rite of Spring are legion but it’s rare to find Stravinsky’s most explosive ballet score coupled with Apollon musagète, his most serene. The result is a lesson in creative versatility, confirming that Stravinsky could be equally convincing as Expressionist and neo-classicist. Yet talk of lessons might suggest that sheer enjoyment is of lesser importance, and it’s perfectly possible to relish this disc simply for that personal blend of the authoritative and the enlivening that Simon Rattle’s CBSO recordings so consistently achieve. Rattle never rushes things, and the apparent deliberation of The Rite’s ­concluding ‘Sacrificial Dance’ may initially surprise, but in this context it proves an entirely appropriate, absolutely convincing conclusion. Rattle sees the work as a whole, without striving for a spurious symphonic integration, and there’s never for a moment any hint of a routine reading of what’s now a classic of the modern orchestral repertoire.

Stravinsky’s exotic score for The Firebird can rarely have sounded more sheerly sensuous, more tactile: the arresting stopped horns, the veil of sliding harmonics as we enter Kastchei’s enchanted garden; the uneasy colours some bars later with sul ponticello violins and contrabassoon ever more present among the low pizzicato strings; then the Firebird and her supplications – the col legno flutterings, the ripple of celesta…and so on. As ever with Rattle, it’s the immense trust he places in the composer’s handiwork, the care he exercises in matters of balance and dynamic shading, harmonic context and so on, that pays the dividends. there is nothing studio-bound about the atmosphere of this Firebird and in the closing pages Rattle really does communicate an ‘as live’ theatricality.

In Petrushka, the crowd scenes have irresistible verve and the puppets’ antics are conveyed with countless fresh observations of orchestral detail (especially concerning articulation and the length of held notes). If the end result falls just short of the ideal, this is for two interconnected reasons: first, that the attention to detail occasionally inhibits characterisation, rather than enhancing it (as in the Tom-and-Jerry music of the scuffle between Petrushka and the Blackamoor); second, that the balance tends to be bass- or middle-heavy, partly because of the acoustic (where is the cutting edge of piccolo and high piano in the first tableau, for instance?), partly because of the extra interest Rattle takes in accompaniment figures. The CBSO are on fine form (with the exception, perhaps, of some unduly reticent oboe and clarinet solos), and Peter Donohoe’s piano-playing (especially in the Russian Dance) is a significant bonus.

The account of Apollon has comparable depth, with elegance transformed into eloquence and the CBSO strings confirming that they have nothing to fear from comparison with the best in Europe or America. The recordings are faithful to the intensity and expressiveness of Rattle’s Stravinsky, interpretations fit to set beside those of the composer himself. 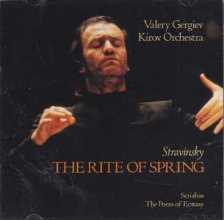 This is probably the most extraordinary Rite of Spring to have been dreamt up since Stravinsky’s own final (and finest) 1960 recording. Stravinsky himself said, in so many words, that The Rite was born from his unconscious. And although now isn’t the time or place to ponder to what extent his – and our – unconscious minds are capable (if at all) of harbouring any memories of pre-Christian ritual, suffice it so say that an exceptional performance of The Rite should at least have us thinking about it as a possibility…and about why we respond to The Rite in the way that we do.

Among modern interpreters, there isn’t anyone better than Gergiev at the important dual roles of showman and shaman. So many of the score’s darker workings have a striking profile here – tubas bellowing strange moans, the bass drum sending shock waves around the performance space, the lower strings in ‘Spring Rounds’ almost ‘exhaling’ their notes, and, for once, giving a proper foundation to that most significant of quiet chords – the one where the Sage kisses the earth. Indeed, ‘Earth’ and the ‘elemental’ seem not so much cultivated in this performance as an inherent part of it.

Either Gergiev has really pondered the ‘sound stuff’ of the Rite, or it just comes naturally to him and his players. Though whether nature or nurture, the end results make for a marginally more compelling overall listen than all the finest recorded Rites of the previous four decades. More controversial is some of the timing of ‘events’, especially the delay of the ascent to the final chord, though when it arrives, you wonder if its shocking make-up has ever been as effectively exposed. The delaying tactics – theatrical pauses and suspensions – proved a little more problematic in the second half of Scriabin’s Poem of Ecstasy – along with Gergiev’s extremes of tempo in the piece. But should one even be thinking these thoughts when offered a Poem which openly embraces the extravagant wonders of the piece as this one does? Better to marvel at all the mysterious curves, the fabulous dark rushes of sound, the celebratory splendours, and the final resolution (dissolution?) into an uncomplicated glory of C major. Here, as in The Rite, the recording is superb. 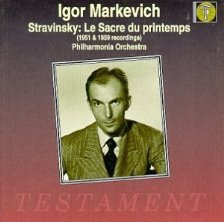 The Rite of Spring (two versions)

Markevitch’s 1959 stereo Rite is in a league of its own. This is a model of how to balance the score (and of how to create the illusion of a wide dynamic range within more restricted parameters). Markevitch would have been totally familiar with every note of the piece (in 1949 he sent Stravinsky a list of mistakes he had noticed in the recently revised edition), and by 1959 he clearly knew what it needed in performance, including how to keep its shock-value alive. There are ‘improprieties’ here, such as the slowing for the ‘Evocation of the Ancestors’ (making the most of those timpani volleys), but nothing serious. As it happens, Mar­ke­vitch’s ‘Introduction’ to Part 2 is unusually fast, but he’s able to take in the following small marked variations of tempo, providing valuable contrasts. And in any case, the playing is so alive, alert and reactive, whatever the dynamic levels: listen to the incisive clarinets’ entry in the ‘Mystic Circles’ and the frisson imparted to the following pianissimo tremolando from the strings.

We could fill the rest of the page with similar highlights and other features unique to the performance but that would be to spoil the fun of discovery (or rediscovery – and what a transfer of the original!). This is a great Rite for many reasons, not the least of which is that the sessions were obviously electric. As a fascinating bonus, Testament also offers a 1951 mono recording of a great Rite in the making. The differences aren’t radical, but enough to justify the idea. 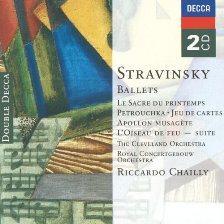 This is a great little set, coupling a ravishing Apollon musagète with a truly stunning Rite of Spring. The Petrushka is equally fine. The fact that Stravinsky’s revision of Apollon (from 1947) dispensed with half the woodwind, two of the three harps, glockenspiel and celesta from the ­original scoring hardly constitutes the bleaching process that a less ­colour-sensitive performance might have allowed. Part of the effect comes from a remarkably fine recording where clarity and tonal bloom are complementary, but Chailly must take the credit for laying all Stravinsky’s cards on the table rather than holding this or that detail to his chest. Everything tells, much as it does in the Scherzo fantastique – whether the euphonious winds and brass at 3'52", the motor­ised repeated notes later on or the ornamental swirlings that, in stylistic terms, dance us all the way from ­Rimsky’s Arabian Nightsto the ­unmistakably Russian world of The Firebird.

Apollon musagète is something else again, and Chailly takes the lyrical line, pointing without punching and allowing his excellent strings their head. The coda is jaunty, the ‘Apothéose’ suitably mysterious, and ‘Variation d’Apollon’ features fine solo work from the orchestra’s leader, Jaap van Zweden. Viable alternatives include leaner, more ascetic readings, but Chailly balances gracefulness with tonal substance and the sound is glorious.