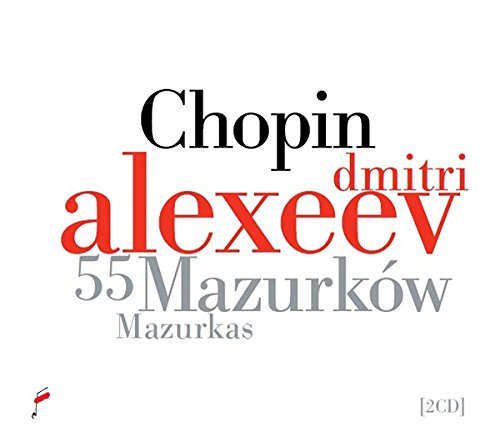 In a recently posted internet interview, Russian-born Dmitri Alexeev discusses his role as a juror of the Chopin Competition and speaks about the Mazurkas. ‘In these pieces,’ he says, and I paraphrase, ‘nationality is important but perhaps doesn’t have the last word. The Mazurkas speak of something very important for every human being.’ The straightforward simplicity that informs these vivid interpretations is one of the keys to their clarity and freshness.

Though Chopin said that his mazurkas were ‘not for dancing’, Alexeev’s tempi are everywhere so apt, his kinaesthetic sense so unerring, that it is almost impossible not to imagine them danced. Here a stamping dance, there a circling dance, here the men click their boots, there ladies weave in and out in an elegant sash dance. A delightful playfulness erupts from time to time.

Alexeev has the uncanny ability of discerning each mazurka’s unique character and individual utterance. This lends his interpretations a stunning variety. I can testify that listening to the roughly 145 minutes of 3/4 time at a single sitting is not only possible but highly enjoyable. Immaculate phrasing is an integral part of these finely wrought performances, but for me Alexeev’s handling of Chopin’s intricate voice-leading and idiosyncratic harmonies is most impressive. Savour, for instance, the poignant piquancy of Op 17 No 2, the delicately poised coquetry of Op 33 No 3, the virile high spirits of Op 41 No 2 or the aching tragedy implicit in Op 50 No 3. The depth and subtlety of these consummately artistic readings means that their full dimension becomes apparent only after repeated listening.

The mazurkas are presented in more or less chronological order and handsomely packaged. Notes on the music are contributed by the inimitable Jim Samson, with an essay by Jan Henrik-Amberg providing a veritable reception history of the mazurkas, as well as documenting the more than 50 complete recordings that have appeared in the past three-quarters of a century. Alexeev’s set will confidently take its place among the best of these, alongside those of Rubinstein, Halina Czerny-Stefańska and Yakov Flier. It may in fact become your favourite of all, as it has mine.