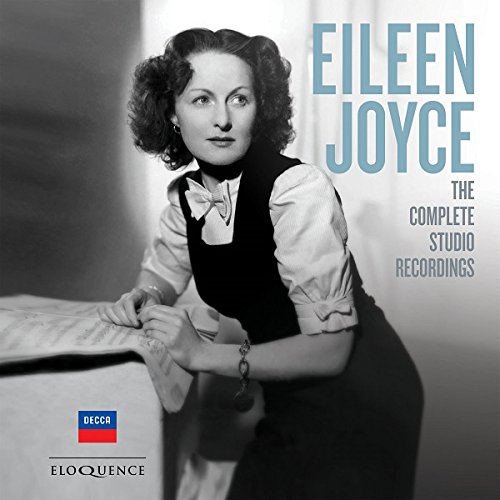 Pianophiles will be slavering at the prospect of having access to all this great artist’s recordings. Some might not slaver quite as much, however, when they realise that six of the 10 CDs in the box are exactly the same (titles, running orders and transfers) as the five discs issued by APR in 2011 as ‘Eileen Joyce: The Complete Parlophone & Columbia Solo Recordings 1933 45’. The same, that is, except for the concerto and chamber items which were not included, to whit Mozart’s A major Rondo, Turina’s Rapsodia sinfónica, Arensky’s Piano Trio, Haydn’s Piano Trio in G and piano concertos by Ireland and Shostakovich. Sorry, but there’s nothing for it but to shell out again, for all six are, if not benchmarks, absolutely unmissable together with many additional treasures, immaculate annotations and excellent 55-page English-only booklet with essays by Bryce Morrison, David Tunley, Victoria Rogers and series producer Cyrus Meher-Homji: 121 works altogether, with only a handful of duplications.

Before addressing these six collaborations, I return briefly to the 87 solo titles common to APR and Decca. When I reviewed the APR CDs in the December 2011 issue, I wrote that ‘… listening to Joyce is strangely addictive. One cannot wait, as it were, to read the next chapter. She shares with Kreisler and Tauber the same unteachable ability to elevate the second-rate to the first-rate, and to illuminate familiar masterpieces with a convincing and unmistakable voice.’

At the risk of repeating myself further, among the many highlights is the remarkable La leggierezza that first brought Joyce to the attention of the movers and shakers. For the ‘B side’ she offered Paul de Schlözer’s (or is it really Moszkowski’s?) infamous Étude in A flat, Op 1 No 2, accessible only to the Hamelins and Houghs of this world. What fabulous dexterity and tonal allure, what fearless execution and total musical conviction! In many of these short, showy works, Eileen Joyce is nonpareil. Her celebrated 1934 dispatch of Palmgren’s En route will put an end to any argument about that. Only in the eight Brahms titles does she seem anything less than completely convincing.

As to the (previously omitted) chamber and orchestral recordings, in the earliest of these, Mozart’s Rondo in A major recorded in 1936, we get a glimpse of the pellucid tone and unaffected phrasing that won her playing of this composer the unlikely admiration of Glenn Gould (three of the sonatas are included in the collection). The Ireland Concerto remains a classic. This was its premiere recording, as was the no less successful account of Shostakovich’s First Piano Concerto recorded by the same forces less than three months earlier. But for me it is the Arensky Trio that shows Joyce at her brilliant best. In the company of Henri Temianka and Antoni Sala, she finds a perfect balance of stunning virtuosity, nimble wit and, in the lovely third movement, a deeply affecting lyrical repose that gives the lie to those who say that Joyce’s playing was all surface glitter. I’d buy the set for this performance alone, with the Haydn Gypsy Trio as an accompanying amuse bouche.

No less desirable are the Decca (1946 47) and HMV (1956) recordings. Eloquence ascribes the Decca solos to disc 7, though almost all were made in 1947, a year after the concertos found on disc 8. These include Beethoven’s Pathétique, Schumann’s Papillons and a previously unpublished Chopin E minor Waltz. The earliest work with orchestra is Bliss’s Baraza for the film Men of Two Worlds, which Joyce recorded with the National Symphony Orchestra under Muir Mathieson – the same forces with which she had, earlier, recorded excerpts from Rachmaninov’s Second Piano Concerto for the film Brief Encounter. The LPO under Erich Leinsdorf were her partners for the commercial recording of the full work, a compelling, engrossing reading for which I have had a lifelong fondness while secretly wishing it had been Mathieson and the NSO who had partnered her. Neither you nor I will have heard the Tchaikovsky Second Piano Concerto recording which precedes this on disc 8 since it has remained unpublished until now. After an unusually solemn exposition from Fitelberg (this was one of a series of recordings he made for Decca after the Second World War), Joyce seizes the heady bravura of her role with thrilling vitality and precision. This, you feel, is going to be an extraordinary reading. Sadly, it becomes hors de combat all too soon, not just because of the Siloti cuts in the slow movement but for several passages excised from the first movement and the unaccountable omission from the otherwise complete last movement of its final bar.

Disc 9 opens with Joyce’s celebrated account of the Mendelssohn G minor Concerto under Fistoulari, music that suits her particular gifts to perfection. Lightly pedalled, the outer movements are like sparkling champagne, yet has there ever been a more touching account of the slow movement? This last appeared on a 1998 Dutton CD with the Rachmaninov, Franck Symphonic Variations and Turina Rhapsody (7/98). What you won’t find anywhere else are Eileen Joyce’s four recordings playing the harpsichord. For Bach’s exuberant Concerto for three harpsichords, BWV1064, two less substantial Vivaldi arrangements and George Malcolm’s whimsical Mozart Variations, her partners are Malcolm himself, Thurston Dart and Denis Vaughan.

The last three tracks of disc 9 and all of disc 10 are devoted to Joyce’s recordings for Saga, an unevenly performed ragbag of 13 encores, including Für Elise and Clair de lune (dutiful), several remakes of Parlophone titles (superb) and a puzzlingly nondescript account of Grieg’s Notturno. Last of all comes the Grieg Concerto in a resonant acoustic with the Royal Danish Orchestra under John Frandsen. Few would make this their first choice; but if you ignore the occasional moments of slapdash ensemble and a boisterous, blustery view of the music (subtle it is not), there is no denying the drama and burning sense of purpose Joyce brings to the score, many hidden details of which emerge unexpectedly. The producer of these Saga recordings was the late William Barrington-Coupe. At least there was one Joyce in his life who was a genuinely great pianist.