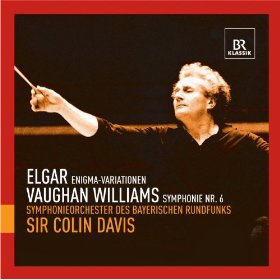 While Sir Colin Davis has made a speciality of conducting British music, it is surprising that he has recorded so little Vaughan Williams. Here, happily, is a fizzing exception, a live recording made in 1987 for Bavarian Radio, of the Sixth Symphony, with all its wide variety of expression, from the violent opening to the sustained pianissimo of the extraordinarily original finale.

What is especially remarkable is how the players take to this music so enthusiastically. Their control of RVW’s jazzily syncopated writing has just the right degree of freedom and the pianissimo finale is superbly sustained, with no suspicion of an unmarked crescendo over its 10-minute span. The relaxation at the end of the first movement, when the composer allows himself a warm tune in place of the original jaunty second subject, is beautifully caught, and the violence of the slow movement gives way naturally to the humour of the third movement with its distinctive use of saxophone.

Elgar’s Enigma Variations are just as beautifully sustained, this time in the slightly more open acoustic of the Herkulessaal in Munich, a most sympathetic venue. Sir Colin’s interpretation is marked by steady speeds and high contrasts. So the first variation, representing the composer’s wife, at its steady tempo opens up into a gloriously warm climax, and “Troyte” is marked by big, dramatic brass and timpani, while the great emotional thrust of “Nimrod”, still at a steady tempo, is glorious, with the Bavarian strings at their most beautiful. The finale then emerges in mounting excitement, and here more than anywhere one values the fact that this was a live recording. The Elgar was recorded in 1983 but, like the Vaughan Williams, it benefits from wonderfully clear, well-balanced sound. An outstanding and very welcome disc.

Variations on an Original Theme, 'Enigma'