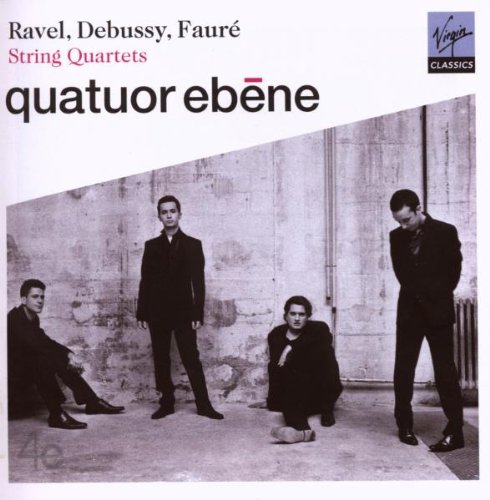 Among the many breathtaking moments on the Ebène Quartet’s CD, there is one in particular that keeps calling one back. It occurs at around 1’14” into the Ravel’s slow movement, the second set, which enters like a bittersweet memory before a literal recollection of the Quartet’s opening motif. Other subtle details of interpretation include the chord at 2’03” that underpins a transformation of the first subject before the same chord leads directly into the second subject – and when it does, utterly changing in character, turning warmer, more openly inviting. The ebb and flow of the passage at 5’29” where the second subject rides above an arpeggiated accompaniment, music that looks both forwards to Debussy’s own La mer and backwards to Rimsky’s Sheherazade (or so it seems). There’s a fluidity to the Ebène’s playing of both works that suits the music’s character, a mood of wistfulness too that the Ravel especially benefits from. This improvisatory approach is hardly surprising from an ensemble that is also celebrated for its jazz performances.

It was a brilliant idea to include Fauré’s late Quartet which, in a sense, provides the linchpin for all three works, the Ravel having been composed in Fauré’s class to mark the 10th anniversary of Debussy’s Quartet, and which is dedicated to Fauré. An extraordinary work by any standards, ethereal and other-worldly, with themes that seem constantly to be drawn skywards, Fauré’s Quartet responds well to the Ebène’s sensitised approach.

Anyone requiring this particular trio of works won’t be disappointed, which makes the various pairings of the Ravel and Debussy quartets on their own seem somewhat less enticing.