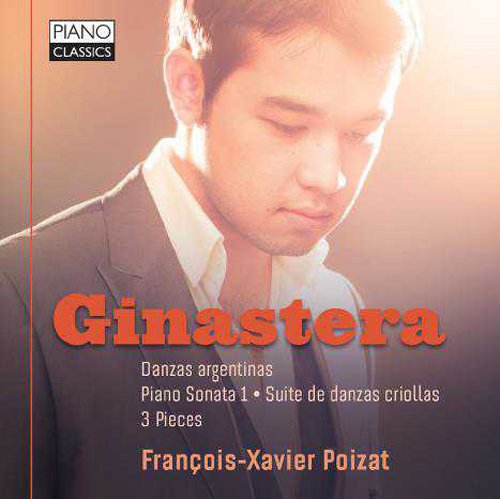 François-Xavier Poizat, a 26-year-old French-Swiss pianist, could hardly have produced a more dazzling tribute to Ginastera, Argentina’s foremost composer. He comes praised to the skies by Martha Argerich, Boris Berezovsky and the composer’s wife, and is presently working with the Argentinian pianist Nelson Goerner. His pianism is as alive to seduction (the Adagietto pianissimo from the Suite de danzas criollas) as to every virtuoso blaze, such as in the ‘Danza del gaucho matrero’ from the Danzas argentinas, to be played furiosamente, violente, mordento (biting) and salvaggio (wild). His ‘Danza de la moza donosa’, also from Op 2, may be less sultry than from Argerich in her incomparable live performance (EMI, 4/00), but it is never less than assured.

How he revels, too, in the First Sonata’s Presto misterioso, a phantom chase taking its cue from Bartók, notably in its final break-up into ghostly fragments. He captures all the raucous brilliance of the Allegro rustico from the Suite de danzas criollas (dedicated to Rudolf Firku≈n≥, clearly invited to forget his aristocratic pianism), and is finely sensitive to the mournful folksong of the Milonga as it floats across its swaying accompaniment. As an encore, Poizat adds Mompou’s Prelude No 5, a gentle and loving tribute to Ginastera’s Catalan origin. The pianist is well recorded and this is so much more than a collector’s piece.