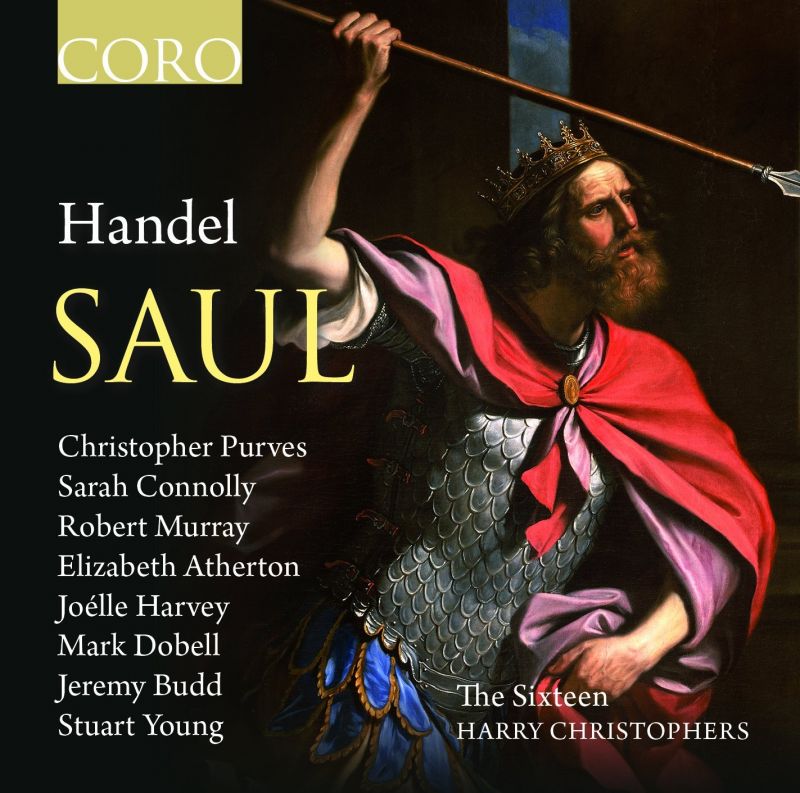 Saul is one of Handel’s most distinctive and greatest masterpieces. Composed only a few years before he ceased writing Italian operas for the London stage, the Biblical dramatic oratorio launched his season at the King’s Theatre on January 16, 1739; the other new work for the season was Israel in Egypt (premiered on April 4), which also featured Handel’s rare use of trombones to enrich several opulent numbers.

The epic anthology of archaic and modern chorus techniques in the scriptural, monumental and decidedly undramatic Israel in Egypt was radically different from the fascinating dramatic characters and quasi-Shakespearean intensity of the vividly theatrical Saul, in which the trombones, carillon and harp are used to illustrate Biblical scenes of music-making, from jubilant crowd scenes to intimate music for David.

Harry Christophers’s enthusiastic preface to the booklet incorrectly claims that Saul ‘represents Handel’s first proper foray into oratorio’, but his ever-sure handling of choruses, sensitivity to the needs of solo singers and affinity for the orchestral grandeur of Handel’s most elaborate score mark him out as an honest, natural Handelian conductor: choices of tempo tend to be about right, and very little in this performance feels contrived, unstylish or misconstrued. A large part of the success of The Sixteen’s performance is the warmly detailed stylishness of the orchestral playing; the organ concerto-style movement in the overture has seldom sounded more fluent, even if it is not entirely clear which of the wo credited organists plays the solos. The punctuating trumpets, trombones and timpani and choral exclamations in the epinicion celebrating the boy David’s victory over Goliath (‘How excellent thy name, O Lord’) offer a glorious swagger, and the altos, tenors and basses of the choir relish illustrating the deceased Philistine’s giant steps in ‘Along the monster atheist strode’.

It now seems that evidence is not conclusive about whether or not the heroic role of the virtuous warrior and talented musician David was first sung by a countertenor; Christophers’s note argues against the countertenor solution, using ideas attributed to the late and great Handel scholar Anthony Hicks, who would have probably been a little more careful about the matter in print. However, all questions of gender/voice-type disintegrate when one hears Sarah Connolly’s shapely phrasing, melodic sweetness and eloquent command of language. ‘O Lord, whose mercies numberless’ is as quietly rapturous as anyone other than the enraged Saul could desire.

Jonathan’s soliloquy disobeying his father’s cruel order to assassinate David is sung thoughtfully by Robert Murray. Saul’s daughters Michal and Merab are like chalk and cheese regarding their initially opposed attitudes toward David, and Elizabeth Atherton and Joélle Harvey are different enough in tone to make an effective direct contrast between the disdainful Merab’s ‘My soul rejects the thought’ and her sister Michal’s ‘Ah, lovely youth’. Discretion might have been the better part of valour for the over-employed harp continuo: the instrument Handel presumably reserved as a special effect connected to David does not seem to fit in the haughty Merab’s ‘What abject thoughts a prince can have!’ (Atherton conveys an ideal dosage of scorn), although the artistic licence works charmingly in Harvey’s lovely performance of Michal’s ‘Fell rage and black despair’, which refers to David striking ‘the sweet persuasive lyre’ (the flute obbligato is beautifully played by Christine Garratt).

Christopher Purves charms, broods, fumes implacably, plots villainously and confronts his doom vividly in the manner of a Shakespearean tragedian. The incrementing fury of his secretive seething reactions to imprudent women exalting David’s military successes above those of their king (the carillon-laden choruses ‘Welcome, welcome, mighty king’) are compelling. The bombastic brassy symphony that precedes his gloating anticipation as he hopes to murder David treacherously at the Feast of the New Moon is a bit short on rhetorical posture but Christophers’s trusting direction of the ombra music is spot-on as the forsaken Saul resorts to outlawed witchcraft on the eve of his final doom in battle.

The sublime elegy for the slain Jonathan and Saul is heartrending in most of the right places; its plangent choral passages are tailor-made for The Sixteen’s flexible, supple and articulate voices, although Christophers uncharacteristically rushes ‘Eagles were not so swift as they’: the vital mood of doleful lamentation should be sustained more organically rather than a sudden rush to convey the dizzy swiftness of eagles who are only metaphorical (Handel did not indicate a tempo marking but I doubt he intended presto vivace).

The Sixteen’s experience of Renaissance polyphony is evident in several contemplative choruses, such as ‘Preserve him for the glory of Thy name’, which sounds beguilingly more like Palestrina rather than the choppy fugue one ordinarily hears even in the best performances. Contrapuntal lines are moulded warmly and with immaculate diction, and extrovert choruses are sung with plenty of charisma, seductiveness or moral outrage as the texts variously demand, such as the choric contemplations of envy and rage that bookend Act 2. Special recordings of Handel’s greatest English dramatic oratorios have become too rare recently, so it is valuable that The Sixteen’s first-class account of Saul is magnificent in every way that matters most.