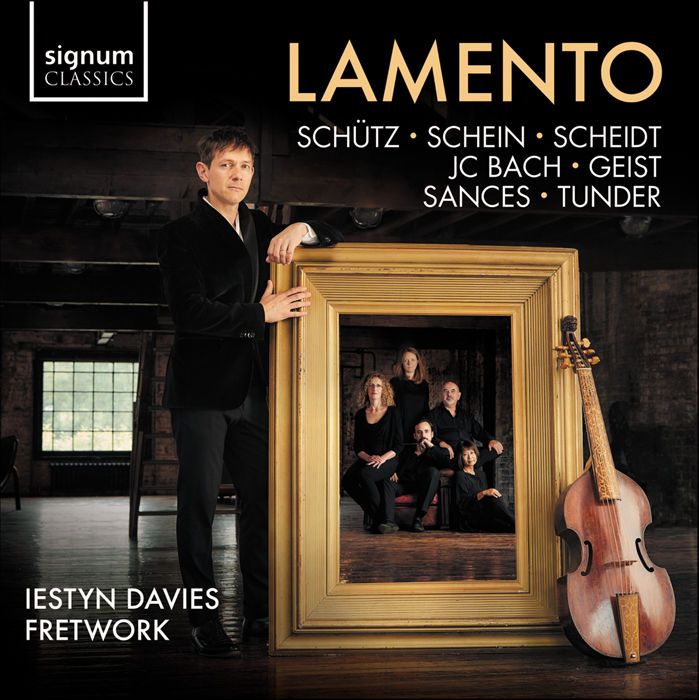 A quick consultation with a well-known online music shop’s website revealed to me four previous albums entitled ‘Lamento’, all featuring early- and mid-Baroque German cantatas of lustrous gloominess sung by alto soloists. Two more with similar dispositions but different titles were also there, but apart from Johann Christoph Bach’s eight-minute jeremiad Ach, dass ich Wassers g’nug hätte (the ‘Lamento’ of the title) there is no other work common to all of these releases, and indeed very few overlaps of any kind. That’s testimony, no doubt, to the strength in depth of this particular corner of the repertoire, but surely also to the growing star status of Bach’s exquisitely stricken plaint.

Fretwork and Iestyn Davies follow their own programming course, too, but also differ radically from all their predecessors in featuring a five-part viol consort (with keyboard continuo) instead of the usual violin-based band. The booklet notes make brief mention of the prolonged life of the viol family in Germany resulting in probable interchangeability, but really they need not have worried too much about it; their viols make such a noble and lovely sound here – a big fat buzz to open Tunder’s Salve mi Jesu, silvery soft clarity in the dances from Schein’s Banchetto musicale, firm agility and definition even in the repeated-note warlike passages of Scheidt’s Canzon super ‘O Nachbar Roland’ – that surely no one is going to complain. Ironically, it is only in the Bach that I missed a violin’s ability to conjure more convulsive sobs in support of the soloist.

Iestyn Davies hardly needs recommendation in a programme like this these days. From his first note of Tunder, through the Passion-like narration-and-aria of Christian Geist’s Es war aber an der Stätte, to the imposing chorale-driven finale that is Schein’s Christ unser Herr zum Jordan kam, he can be relied on for an affecting tone quality and controlled ease of movement entirely in keeping with the music. Fellow countertenor Hugh Cutting joins him in the Schein, as also in Schütz’s Auf dem Gebirge, in which the harrowing image of Rachel weeping for her children is presented not through histrionic dissonance but by the sustained expressive intensity of the music and its performers. It’s a gem, one among several on this beautiful release.