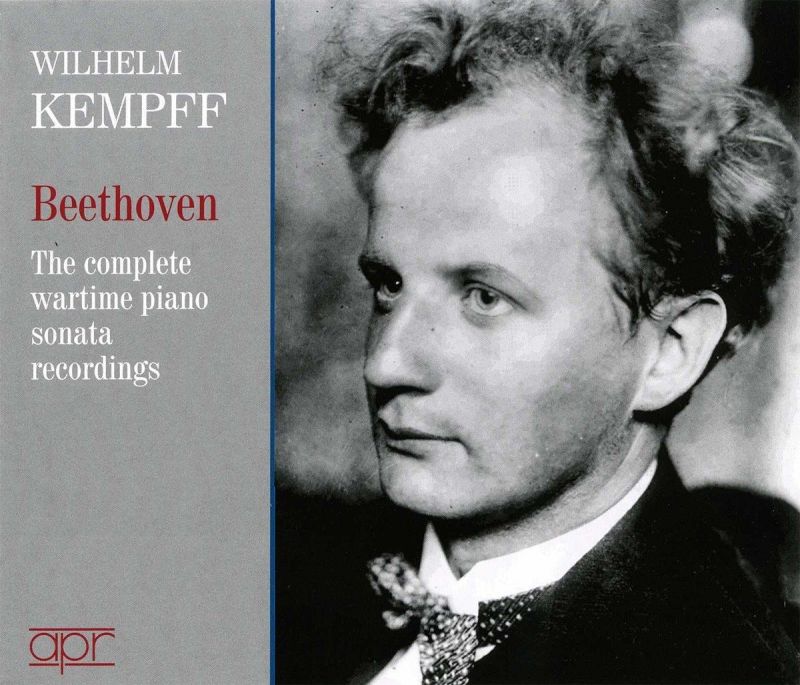 Beethoven’s piano sonatas occupied Wilhelm Kempff throughout his long recording career. In addition to his two familiar mono and stereo LP cycles, Kempff set down 24 of the 32 sonatas on 78s, eight of them in multiple shellac versions. Following up last year’s survey of the late sonatas (Op 78 through Op 111), APR now brings out Kempff’s complete 1940‑43 wartime Beethoven sonata sessions comprising 16 works, six of which the pianist had also recorded before the war. It’s not clear if Grammophon/Polydor intended to launch a new Beethoven cycle from scratch featuring Kempff, yet they clearly wanted to get a head start; according to APR’s discographical notes, Kempff recorded no fewer than five whole sonatas and part of another on March 13, 1940, alone!

In contrast to the large-scale structure and dynamic brio characterising Artur Schnabel’s influential Beethoven interpretations, Kempff generally approached Beethoven from a more intimate, less cosmic, cameo-like vantage point, elucidating formal niceties through discreet pedal effects, subtle colorations and unexpected yet never exaggerated accents. As Kempff got older, he modified his approach to changing times; his readings grew more economic in expression, minimising the sectional ritards and elongations of phrase one often finds in his shellac traversals. Compare, for example, the curvy transitions in the first movement of the 1940 E flat major Op 7 Sonata against the stereo version’s tighter counterparts, or the sundry tempo modifications within the wartime ‘name’ sonatas (Pathétique, Moonlight, Waldstein and Appassionata) with the leaner LP-era remakes, and you’ll hear what I mean.

However, in the young(ish) Kempff’s hands, such expressive devices never sound predictable or generic. Unlike many modern-day pianists in the Rondo of the A major Sonata, Op 2 No 2, Kempff refuses to make a lingering ‘swan dive’ out of the main theme’s octave drop at the end of the opening phrase, although he does so with a coy and effective diminuendo in the following phrase. He imparts a quiet yet ever-present urgency to the minor-key theme (1'48") that underscores the music’s kinship with the first movement of Schubert’s later sonata in the same key, D959.

Op 14 No 1 is all lightness and grace, although – contrary to my colleague Bryce Morrison’s vividly descriptive booklet notes – I wouldn’t make the slightest comparison between Kempff’s measured pacing of the central Allegretto and Sviatoslav Richter’s far slower and heavier tread. If you want provocative, listen to the intensity of Kempff’s off-beat left-hand accents in Op 14 No 2’s Andante. His mono 1950s Op 22 is a miracle of nuance, timing and tempo; so is the 1940 version, where the Adagio proves even more flexible in its songful give and take. Op 10 No 2’s jaunty finale is a tad more incisive and less square than it would become on LP, and Op 28’s Allegro similarly boasts more dynamic surges and overall vitality. With Kempff, Op 31 No 3’s whirlwind finale may not foam at the mouth like Schnabel, yet it’s brisk enough and far better controlled. The original recordings are sonically well balanced and give a good measure of Kempff’s sonority. While the rare shellac pressings are admittedly of poor quality, any extreme noise reduction on transfer agent Mark Obert-Thorn’s part would have compromised their frequency range and timbral virtues. Does this highly desirable reissue suggest that APR will eventually reissue all of Kempff’s Beethoven 78s? Or, better yet, Kempff’s complete 78s?