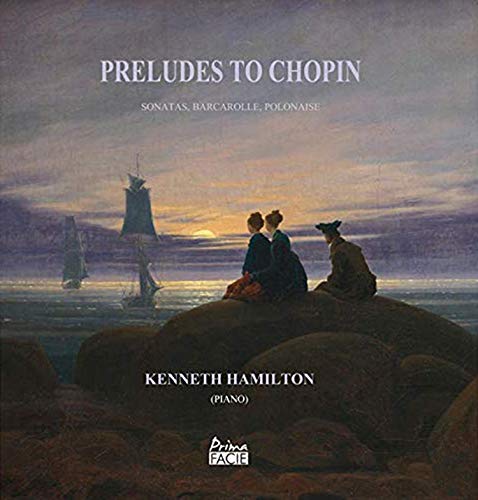 In his booklet notes, Kenneth Hamilton expresses a deep-rooted interest in Romantic performance traditions that purport to inform his Chopin interpretations. In the A flat Polonaise, for example, he appropriates characteristics of Ferruccio Busoni’s piano roll recording while incorporating textual variants that Liszt pupil Bernhard Stavenhagen set down in a piano roll of the Chopin/Liszt My Joys. He cites Paderewski as the impetus behind the sundry arpeggiations, untogether hands and octave transpositions in the Funeral March of the Second Sonata. And so on.

While Hamilton talks the scholarly talk, his pianism doesn’t always walk the walk, so to speak. His triplet chords in the second subject of the same sonata’s first movement are heavy and laboured. The first theme’s relentless left-hand accompaniment becomes more rhythmically slack as it progresses. Hamilton’s notey and unsupple Scherzo in the Third Sonata Scherzo never takes wing. His articulation in the Second’s enigmatic unison finale is vague to say the least. And what insistent, pounded-out down-beats throughout the main theme of the Third Sonata’s finale.

Hamilton’s Barcarolle blurs the line between understated and underplayed, and suffers from a perfunctory reading of the sublime coda that misses all of the opportunities for melodic and harmonic pointing that Arthur Rubinstein aristocratically savoured. While the A flat Polonaise’s Trio builds with excitement (with no small help from Busoni!), and the G major episode prior to the principal theme’s recapitulation is sensitively shaped, Hamilton’s hectic sense of rhythm lacks the idiom’s requisite swagger.

The Prelude selections are equally problematic. The F sharp major’s active middle voice flickers in and out of focus, buried in a fog of pedal. The E flat minor is a mad rush of notes bunching together like crowded rush-hour metro standees, while the A flat sounds choppy and lyrically constipated. But Hamilton’s fleet and offhandedly spun C sharp minor Op 45 Prelude realises the pianist’s improvisatory conception perfectly, proving a viable antipode to the relatively Brahmsian deliberation of Arrau or Michelangeli. And in the Third Sonata’s Largo, listeners will welcome Hamilton’s intimately scaled animation over today’s fashionably slow crawls (Lang Lang, most notoriously). On the whole, though, Hamilton’s aspirations in the direction of his golden-age heroes exemplify mind over reality.

Sonata for Piano No. 3