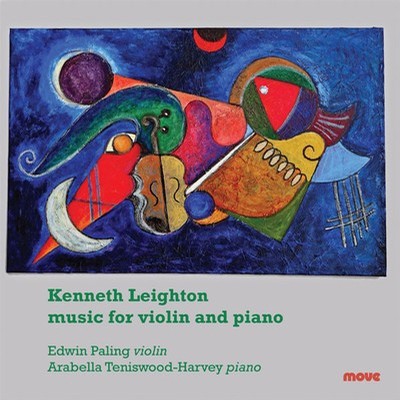 Kenneth Leighton’s music for choir and organ is still a fixture of the Anglican cathedral repertoire but his instrumental works haven’t proved as enduring. While most are represented by at least a single recording, his earlier chamber pieces for violin and piano have until now remained silent. A world-premiere recording by violinist Edwin Paling and pianist Arabella Teniswood-Harvey restores to life their sharp-edged lyricism, reminding us of the stylistic breadth of a composer who was so much more than his church anthems.

Spanning almost three decades, the works here trace Leighton’s development from the student romanticism of Sonata No 1 through his experiments with serialism in Sonata No 2 to his arrival at a mature modernist aesthetic in Metamorphoses. The First Sonata proclaims its allegiance to the pastoral elegies of Vaughan Williams and Howells in the melancholy and beautiful violin melody of the Allegro; but the dialogue between tradition, in the exquisite piano chorale melody, and a forward-looking violin, whose chromaticisms refuse to be comforted or resolved, is all Leighton.

It’s a fretfulness that finds sustained voice in the Second Sonata, with a serial passacaglia for a second movement and a restless perpetuum mobile by way of a finale. However fragmented and supporting Leighton’s piano-writing becomes, his lyric impulse is always sustained in the violin, offering a guiding thread through the inscrutable transformations of Metamorphoses.

Teniswood-Harvey articulates Leighton’s often unexpected rhythms vividly, by turns cushioning and whetting the violin’s chromatic blade. Paling finds some rich and blackened shades for the lower register of Metamorphoses and the modernist nightscape of Nocturne; but the long lines of the First Sonata offer no cover for bulges or breaks and do expose a tightness and one-dimensionality to his tone at the top.

Sonata for Violin and Piano No 2