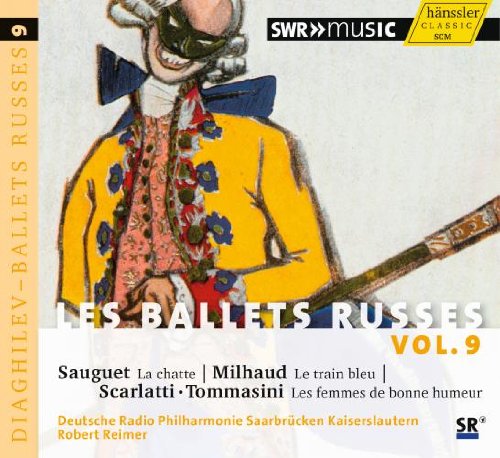 This is Vol 9 of Hänssler Classic’s survey of Ballets Russes scores and features three Diaghilev commissions. Most of us know Milhaud through works such as Le boeuf sur le toit and Scaramouche but Le train bleu falls outside my expectations of the composer. As a pastiche of pallid, second-rate Edwardian salon music it is spot on, a suite that would show Edward German on an off-day in a good light. It comes as no surprise to learn that Milhaud composed the score in a hurry while simultaneously fulfilling another commission (Salade for Massine). Unless they are, perversely, sole examples in this politely tonal score of wrong-note harmony, there are a couple of clinkers from the trumpet at 5'00" in No 6, ‘Entrée de la championne de tennis’.

Vincenzo Tommasini’s orchestrations of Scarlatti’s keyboard sonatas are a far more attractive proposition. His once-popular suite fashioned from the score of The Good Humoured Ladies (1917) is usually paired with Walton’s The Wise Virgins. I take Robert Irving’s 1962 recording as the benchmark which, despite its half-century, sounds well with tempi benefiting from being a notch up from Reimer’s.

The discovery (for me, at least) is La chatte by the forgotten Henri Sauguet (1892-1974), sometimes included as a seventh member of Les Six. Chic, economical, tuneful and unmistakably Gallic, the suite’s Overture and eight movements are a delightful soufflé to accompany a story about a young man falling in love with a cat – ‘a silver affair with sodomite reflexes’, according to an early critic of the ballet. The playing, again, is redolent of page-turning efficiency rather than infectious enthusiasm.