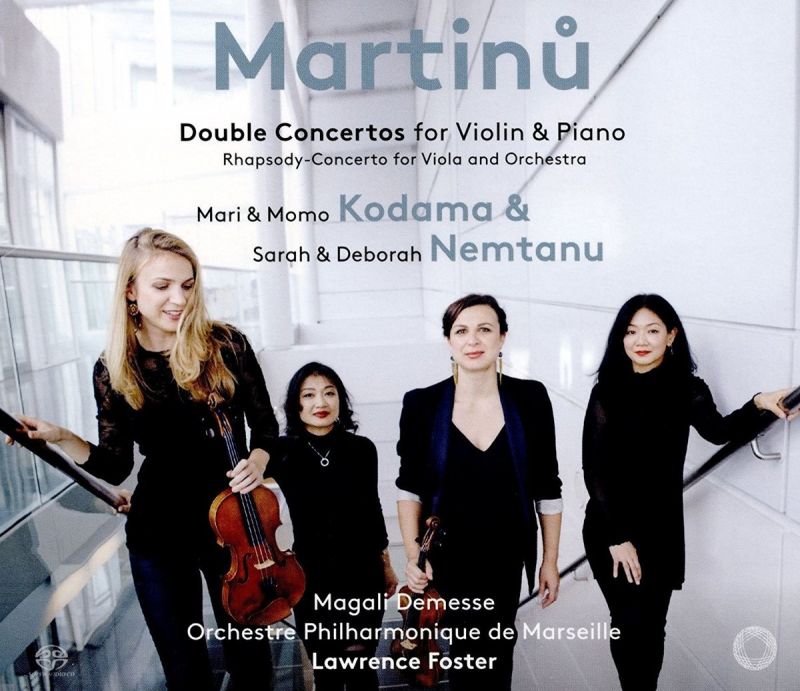 Here we have Martinů’s piano and violin double concertos performed by two pairs of sisters, which is less gimmicky than it might initially sound when you remember that the Labèques have the Concerto for Two Pianos in their repertory (albeit not, to my knowledge, in their discography), and that the Concerto for Two Violins was commissioned by violinist twins Gerald and Wilfred Beal.

The latter work is played with bags of charm and considerable flamboyance by the Franco-Romanian Nemtanus, Deborah and Sarah, sweet if a bit lightweight in tone, exactingly precise in all those exposed bravura passages in parallel harmonies, and relishing the neo-Baroque flourishes with which Martinů peppers the score. There’s dash and verve in the opening movement, a slightly barbed elegance in the Moderato, where they vie with each other for the principal melody, and real exhilaration in the final sprint for home. Above all, they sound as if they’re really enjoying themselves with it.

It’s an immensely persuasive performance, as is Momo and Mari Kodama’s angry, hard-hitting account of the Concerto for Two Pianos, written in 1943 as an expression of Martinů’s anxieties at the Nazi occupation of Czechoslovakia. The ferocity of the opening pins you to your seat, though the close placing of the pianos and the sheer weight of the Kodamas’ sound means we lose too much orchestral detail in the process. Their technical prowess, throughout, proves exceptional, though the emotional trajectory is unflinchingly conveyed, with the confrontational fury of the first movement giving way to the gaunt exchanges of the Adagio and a tentative but genuine optimism in the finale.

The double concertos are separated by the reflective Rhapsody-Concerto for viola, which Pentatone has rather unfairly treated as a filler by excluding viola player Magali Demesse from the cover photograph and placing her name in small print down-page. This is, however, another strong performance, notable both for the quiet sincerity and understated nobility of Demesse’s interpretation and for some beautiful playing from the Marseille Philharmonic under Lawrence Foster. Fine throughout, they come very much into their own here. Dark woodwind and brass add immeasurably to the sombre mood and the strings, warm and vibrant, are excellent, both in the majestic opening statement and in the slowly shifting chords that track the nostalgic viola melody that comes to dominate the second movement before bringing the work to its serene close.

Concerto for Two Pianos and Orchestra

Rhapsody-Concerto for Viola and Orchestra

Concerto for Two Violins and Orchestra No. 2