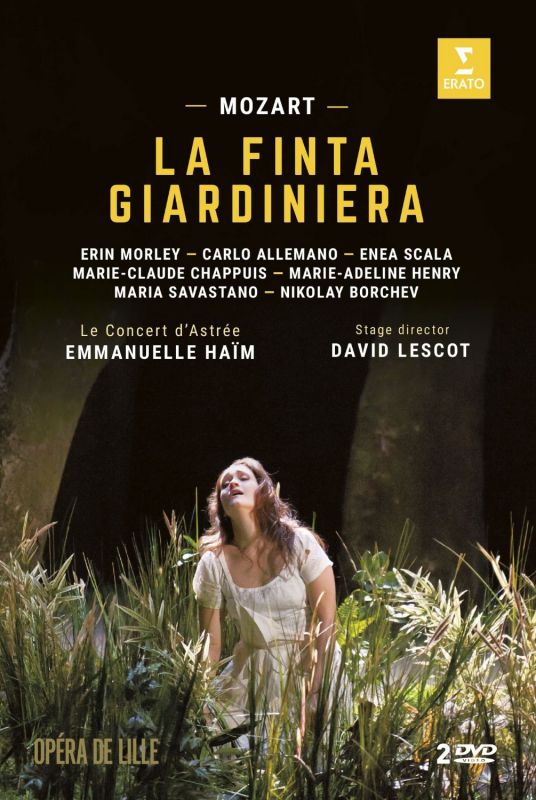 The 18-year-old Mozart’s floral romp has been fair game for modern makeovers, most entertainingly in Doris Dörrie’s wacky 2006 Salzburg production set in a garden centre (DG, 3/07). David Lescot’s Lille staging is far simpler. The two sets used are almost minimalist: a stylised garden, with tubs of flowers and trees, rows of wheelbarrows or trimmed hedges; then, as the action thickens, an unkempt if hardly threatening forest. There are some nice comic touches – a giant Venus flytrap to symbolise the upwardly mobile Arminda, ruthlessly bent on becoming a Countess. But Lescot mercifully refrains from ‘clever’ gags – unlike many of his ilk, he is not afraid of stillness – and from grafting spurious ‘interpretation’ on to the silly buffo intrigue. The characters, all clad in contemporary white costumes, and their chaotic relationships are clearly drawn. Amid the absurdities, the gradual self-discovery and reconciliation of the two central figures, Sandrina, the ‘pretend garden-maid’ of the title, and her violently unstable lover, Count Belfiore, emerge as true and touching.

All the cast seem natural stage animals and take well to the camera. Among a sprinkling of Italians – always desirable in opera buffa – Maria Savastano as the wide-eyed, pocket-sized Serpetta is a delightful comic presence. Singing with bright, focused tone and gleefully dispatching her reams of patter, she has her would-be lover Nardo, played with gusto by Nikolay Borchev, wrapped round her little finger. Marie-Claude Chappuis, perpetually clutching a badminton racket, brings agility and (in her distraught Act 3 aria) passion to the serious music Mozart wrote for the lovelorn Ramiro (Chappuis sang the same role on René Jacobs’s CD recording); and the mannishly dressed, rapier-wielding Marie-Adeline Henry makes a vocally and histrionically formidable Arminda, her over-the-top haughtiness tamed only when she accepts Ramiro as her husband.

Neither the Governor, the rough-voiced Carlo Allemano, nor Enea Scala, incisive but slightly gritty of tone as the Count, is a Mozartian paragon. But Scala vividly charts the Count’s progressive transformation from preening foppishness, via his ‘mad scene’ – a musical and dramatic highlight – to his final remorse and reunion with Sandrina. In the title-role, fast-rising American soprano Erin Morley virtually steals the show, as she should. No shrinking violet, she subtly hints at the vulnerability beneath Sandrina’s poise and savoir faire, singing with lovely, pellucid tone and movingly realising the terror and despair of her Act 2 scena. Emmanuelle Haïm encourages playing of energy and colour from her period band and works up a fine comic lather in the act finales. While Dörrie’s Salzburg production generates more zany fun, there is plenty to savour in this spare, elegant and emotionally truthful staging of an opera which already hints at the future composer of Figaro.