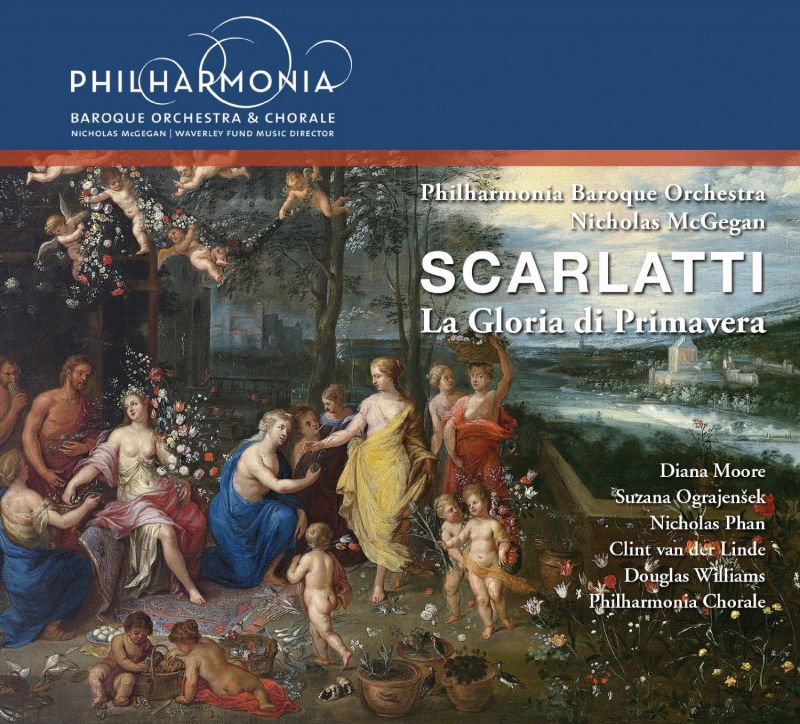 The serenata La gloria di Primavera (1716) was commissioned by the Neapolitan Duke Nicola Gaetani dell’Aquila d’Aragona for his wife Aurora Sanseverino, although the libretto by her secretary Nicola Giuvo was designed as an expedient celebration of the birth of the Habsburg Archduke Leopold, son of Holy Roman Emperor Charles VI (who had gained the kingdom of Naples as part of the severance package that concluded the War of Spanish Succession). Therefore Alessandro Scarlatti’s music was created for the same circle of patrons in Naples, and in collaboration with the same poet, as Handel’s Aci, Galatea e Polifemo (1708); the superhuman bass Antonio Manna who sang Jupiter had most likely been Handel’s first Polifemo eight years earlier. The first performance, on May 19, 1716, also featured the soprano Margherita Durastanti (Handel’s first Agrippina). The four seasons hold a contest to establish supremacy as the most important to the new-born prince; after the triumph of Spring, Jupiter leads the collective prophecy of the coming of a new golden age (as it turned out, the infant Leopold died only a few months afterwards).

There are also several fine ensembles for the seasons, such as solemn minor-key quartets invoking Jupiter – whose appearance in Part 2 has a theatrical impact thanks to Douglas Williams’s resonance and mastery across a wide-ranging tessitura. Quibbles such as a poor choice about where to break between the two discs and minor hyperbolic lapses in an otherwise excellent booklet-note are dissolved by McGegan’s experienced direction and the musical finesse of his Californian orchestra. This is a delightfully enjoyable revelation of the elder Scarlatti’s genius.