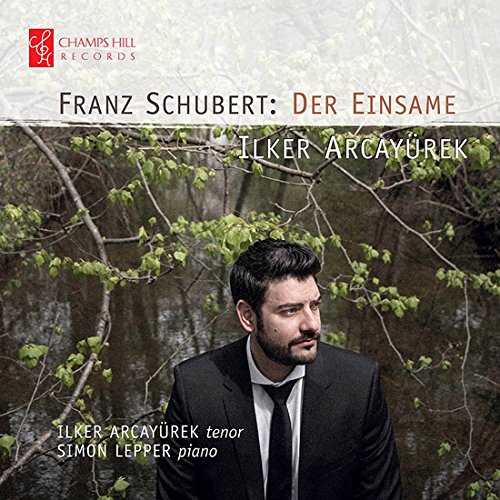 The ever-increasing tenor population in the Schubert song discography reaches a peak of sorts with Ilker Arcayürek’s intelligently conceived recital, executed with vocal freshness and an open-hearted quality that recalls the young Nicolai Gedda and Christoph Prégardien. The Italianate richness of his timbre makes him a particularly mainstream voice in this repertoire, though he has all of the needed interpretative individuality: without the vocal rumble of baritones and basses, the more exposed tenor instrument demands that he have a deep emotional presence at every turn. Mostly, he does.

Using the song ‘Nachtstück’ as a litmus test, one hears Ian Bostridge (Wigmore Hall Live, 8/14) haunted to the bone by death, with individual words tinged by bitterness, whether he is acting as the song’s narrator in one stanza or, later in the song, portraying the elderly, dying protagonist who sings himself into the hereafter. The more boyish-sounding Matthew Polenzani (Wigmore Hall Live) is full of probing apprehension in confronting the great mystery that is death. The more baritonal Peter Gijsbertsen (Phaedra Classics) projects tentative hope. But with his long-reaching legato line, Arcayürek creates a more satisfying journey that goes to the verge of rapture, aided by pianist Simon Lepper creating eloquent rhetorical silences with hushed reverence.

Though his recording career dates back at least seven years to ‘Weihnachten mit dem Mozart Knabenchor Wien’ (Classic Concert Records), the Istanbul-born, Vienna-raised tenor has recently distinguished himself in various young artist competitions and was named among BBC Radio 3’s New Generation Artists in 2015. He maintains a small repertoire of opera roles but, for the time being, the intimacy of his voice suggests recital repertoire is where he stands to win the most devoted audience, especially in a programme such as this, ‘Der Einsame’, which is about solitude, of casting off attachments to the temporal world and embracing the ethereal.

Arcayürek’s reading of the album’s title song isn’t the mildly comic portrait of middle-class complacence heard from Dietrich Fischer-Dieskau (DG) but somebody who is in refuge from the outside world. The rest of the programme has its share of hearty songs such as ‘Der Musensohn’ and even ones that overtax his voice a bit, such as ‘Der Schiffer’. ‘An die Laute’ even comes off rather trivial, but is effectively sequenced just before the weighty ‘Nacht und Träume’ that begins the more reflective final leg of the recital. Though his German is excellent, Acayürek’s approach to the language is the polar opposite of the hyper-inflected Bostridge. Arcayürek sings ‘Schwanengesang’, for example, with the kind of fearless clarity that comes with minimum vibrato, projecting emotional content with understated inference rather than colouring of individual words. That approach is perfect for the following ‘Meeres Stille’, in which his voice conveys the watery surface with expressively deployed legato at the bottom of his range and at hushed volume levels. Lepper’s pristine accompaniment – in a fairly radiant recording acoustic – is an essential partner, as is the detailed booklet note by Richard Stokes.