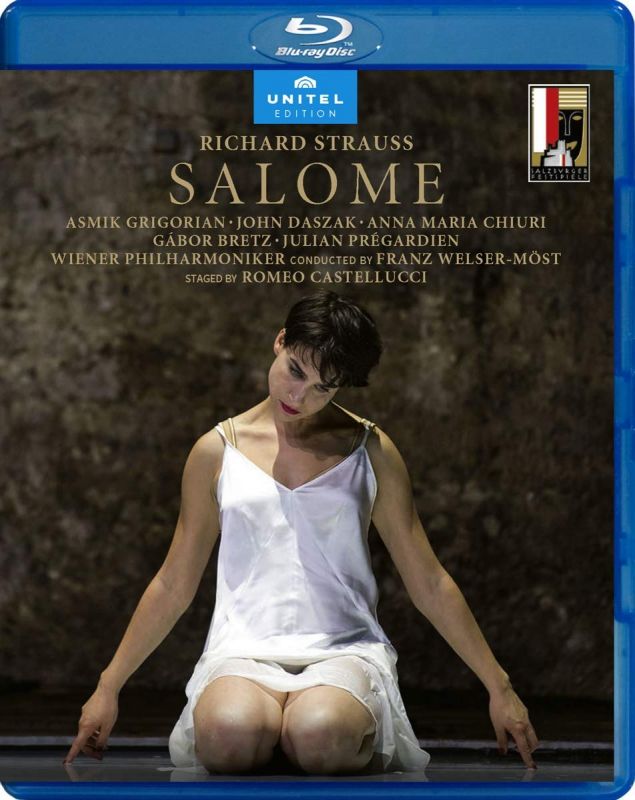 Romeo Castellucci’s production of Salome bowled me over at last summer’s Salzburg Festival. I’m pleased to report that it transfers to the small screen with electrifying power, particularly due to Asmik Grigorian’s remarkable debut in the title-role.

The Italian director takes direct inspiration from the city’s Felsenreitschule itself. Hewn into the Mönchsberg rock, the ‘Rock Riding School’ was a cavalry stables before being turned into one of the festival’s theatres. Castellucci camouflages the 96 arcades at the back of the stage, filling the void to create a stony, suffocating atmosphere before a single note of Strauss’s score sounds, cicadas chirruping restlessly in the heat. Across the frontcloth are the words Te saxa loquuntur (‘The stones speak of you’), the inscription above Sigmundstor, the tunnel that slices through the Mönchsberg.

Castellucci’s Salome is riddled with enigmas. At the start, blood is already being wiped from the stage’s golden floor even before a drop has been shed. The moon is eclipsed, blacked out, so that much of the action plays out in shadow. Salome praises Jokanaan’s white skin, yet his voice thunders from a black void, the prophet daubed in tar, feathers and fur before being hosed down by stableboys. The prophet is also represented by a black stallion that careers around the cistern as Salome writhes on her back in a sexual fantasy, having donned a saddle and toyed with riding tackle – another Felsenreitschule reference – when Jokanaan rejects her. Salome does not perform the Dance of the Seven Veils. Instead, she is strapped, half-naked, in the foetal position to Herod’s throne, and a block of stone slowly descends as if to crush her, to petrify her into the rock. And when Salome demands Jokanaan’s head on a silver platter as her reward, she is instead served up his headless body in a pool of milk, plus the head of his black stallion alter ego.

Weird? Very much so, and the production’s perversity stopped me from awarding the full five stars … and yet it’s the staging that haunted me most last year. I still don’t pretend to fathom everything Castellucci does, but repeated viewing has made me admire it even more. Annoyingly, not all the production details are captured on this Blu ray, the video director missing the slicing of the frontcloth before the music begins – a significant moment – and the finale doesn’t really show the giant black silk balloon that engulfs the stage.

Asmik Grigorian’s erotically charged Salome is outstanding and the main reason you should at least try to see this performance even if the production doesn’t appeal. The Lithuanian soprano sings the role superbly, a lighter soprano than many of the tungsten-plated heavies heard elsewhere, but flecked with steel nonetheless. She has no problem riding the might of the Vienna Philharmonic, and her initial ‘Gib mir den Kopf des Jokanaan!’ is deliciously caressed before being repeated as an intimidating, petulant snarl. She is a terrific actress, too; sulky, steamy and manipulative.

Despite being shrouded in darkness, the Hungarian bass Gábor Bretz makes a vocal impact as Jokanaan, while John Daszak is an intriguing Herod, less neurotic than most, perhaps, though horrified at Salome’s demands. Anna Maria Chiuri is a suitably ghastly Herodias, while Julian Prégardien is a sweet-toned Narraboth, sung with a Lieder singer’s care and attention. Franz Welser-Möst conducts a terrific account of Strauss’s score, the Vienna Philharmonic on scintillating form. Not to be missed.