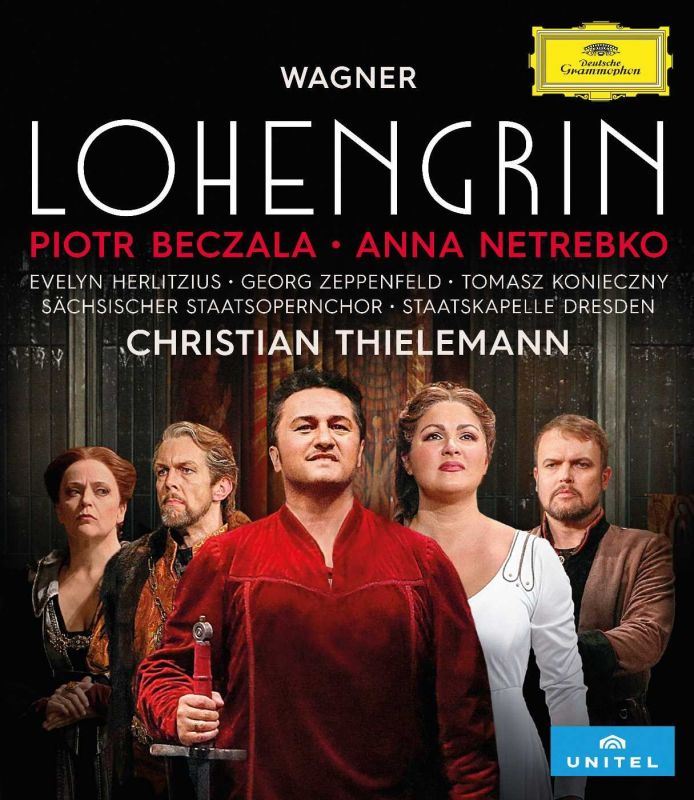 It’s a crucial pleasure to be able to keep in touch now with the latest productions from Wagner HQ thanks to DG’s (and Bavarian Radio’s) regular preservation of the year before’s premiere. Of course, not every product of Katharina Wagner and Christian Thielemann’s regime can be an imaginative success and, for this viewer, the latest offering of a new Lohengrin falls some way behind its predecessors, throwing up successive questions about what we’re seeing while providing few penetrating answers.

Yet what we hear is outstanding. Bayreuth administrations have long dreamt of casting this, Wagner’s last ‘romantic opera’, with singers from outside the specialist Wagner discipline – Wieland Wagner talked of Mario Del Monaco in the title-role and Maria Callas as Ortrud. The 2018 production already hosts Polish tenor Piotr Beczała, famed for his Italian roles, and Bayreuth tried this year as well to alternate Krassimira Stoyanova and Anna Netrebko as Elsa. Beczała, who has already filmed the part with Thielemann in Dresden (A/17), sounds to fit the title-role like a glove – with both the Italianate sound that one may dream of and more than enough stamina to sustain its length. Opposite him Anja Harteros (who has also already filmed her role, in Munich – Decca, 9/10) brings to Elsa fluency, strength and impeccable diction. Meier’s experience of the role and maturity bring dark character benefits to her Ortrud; Tomasz Konieczny is a lively, punkish, firm-voiced Telramund; Zeppenfeld and Silinš are impeccable as King and Herald.

No complaints there. One may wish, in the idealest of worlds, that Thielemann’s handling of Wagner’s earlier operas would have listened a little more to period practice; but that’s never been his way, so – with ‘big’ Romantic Wagner as a given – this is a fine and thoroughly achieved way of doing it.

The stage production has been admired by credible authorities but it strikes me as both looking ugly and being essentially shallow. The space and costumes are blue – the synaesthetic colour of the work according to Thomas Mann and Wagner himself. Defunct apparatus of disrupted electrical power sparks back into fully lit life at major events connected with Lohengrin – his arrival (which also frees Elsa from being burnt at the stake) and his overcoming of Telramund’s assassination attempt in Act 3. OK, these could be a symbol of the Brabant people’s loss of spiritual (aka Christian) belief until a redeemer comes and may even explain why the returned Gottfried at the end is (literally) a Green Man introducing a more acceptable form of power.

But – and I apologise for listing questions: why are all in (wrong period) costumes that could transfer directly into Verdi’s Ernani or Don Carlo; why do all the soloists have pantomime fairy wings attached; why does the Act 1 fight take place with flying doubles (not well done either, as filmed); and is Elsa tied up so much just to indicate she’s trapped in helpless obedience to Lohengrin (this includes an orange bondage rope in the couple’s bedroom, appearing shortly after they’ve had a bedtime reading session from what look like Gideon Bibles)? The chorus – and they are a terrific acting chorus – and soloists clearly needed a choreographer to routine the random selection of stylised movements handed out to them. Also the basic blocking (where characters move and stand) often denies important people sufficient presence at key moments.

Opus Arte from Bayreuth (under Andris Nelsons, 10/12) or Berlin (under Kent Nagano, 7/10) and Decca from Munich will more than cover for your small-screen Lohengrin needs, plus other more conservative options from Vienna and America. The present new release provides outstanding listening but annoyance and frustration to watch.