There was a better-than-average chance that composer Julian Anderson would have a winner in this category, given that two of the three shortlisted recordings were of his works. It’s a remarkable feat, not least because they comprise his first ventures into the studios. A complete surprise, though? Surely not. Anderson has for some years now been touted as one of the leading figures in contemporary music, numbering figures like Oliver Knussen (the conductor on the winning disc) among his champions, and winning awards along the way. And Knussen and his players dazzlingly evoke the composer’s vivid, transfixing sound worlds. As Arnold Whittall’s Gramophone review said: “For more than a decade Julian Anderson has been consolidating his reputation as a leading talent. This first CD shows that talent at full stretch.”

Julian Anderson on looking afresh at time in music

For these first recordings, I worked on the edit plotting, choosing the edits. And right after I did those, I wrote an oratorio for the Proms called Heaven is Shy of Earth, which lasts 35 minutes. That’s longer than my earlier pieces. I suddenly felt the scale of my work expanding, and that may be something to do with the fact that I had just been doing these edit plots. When you’re working with slabs of time, sticking them together into bigger slabs of time, it sets you thinking afresh about what time in music is, and how and when we listen to a piece. It’s fascinating to play with the idea of anticipation of what’s going to happen – you build up expectation and then play with that. And having learnt so much about how to move in music, I’m now not so afraid of music standing still. 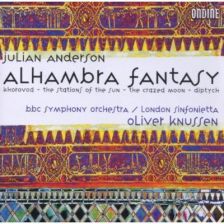