It is often said that the best music documentaries allow the subject’s performances to do the talking, or at least to breathe. Thankfully, here we are given long excerpts of Julian Bream doing what he does best, guitar in arm. If performance is an essential part of Bream’s personality, hearing him reflect on his life and career reveals so much besides. Bream, almost as good a raconteur as he is a guitarist, comes across as the sort of person in whose company you would love to spend a long afternoon. He regales us, in his modest way, with marvellous stories of the composers with whom he has worked, the music he loves, and the tale of his rise to prominence. There is also some fascinating archive footage – none more so than Bream’s hilarious encounter with a less-than-accommodating Stravinsky. As William Yeoman wrote in his Gramophone review: “Two of the most enjoyable hours you’ll spend in front of a television set.”

John Williams, guitarist, on a musician who has always stayed true to himself

Julian is the most important and enjoyable musician I’ve ever had the honour of working with. This wonderfully made film brings out all the facets of his personality truthfully, warmly and infectiously. It’s a very eventful life, and he has shown enormous honesty and determination (he does have a quiet and respectful persistence and has a way, as the Stravinsky clip shows, of very modestly achieving exactly what he wants). Whereas Segovia was a bit of a snob who covered up his early background, Julian is who he is – he has always stayed true to himself. Purely from the point of view of the classical guitar, what he has done and stood for makes him in my view an even more important figure than Segovia. This film makes clear to succeeding generations just how grateful to Julian Bream they can, and should, be. 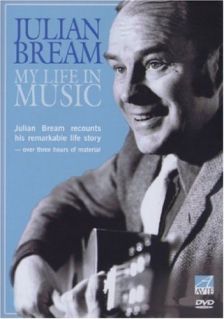