Why should sopranos have all the best tunes? Especially when a singer such as Jonas Kaufmann can turn those of Richard Strauss into this kind of thrilling recital. Other tenors have dipped a toe into the water normally crowded with the greatest female vocalists; Kaufmann dives straight in. This is passionate singing, sexy even – not for nothing has the German been described as resembling a flamenco artist. The best-known songs here are delivered with electrifying ease, and there is elegance and intensity in the rarities (we mustn’t forget, either, the wonderful contribution of pianist Helmut Deutsch). Just listen to Kaufmann’s command of voice colours and his ability to float beautiful long phrases, especially in the high register. Strauss is said to have described tenors as a “disease” – surely he would have been cured of that view if he could have heard this set.

Jonas Kaufmann on the challenge of Strauss

I’ve been around Strauss for many years. Even though I’m a tenor I love him so much. One of the major reasons he wrote so much for soprano was because his wife was a soprano. But that’s good luck for me because it means almost every song is in a high key and I can sing them at the original key. Strauss writes pretty weird harmonies and rhythms – if you try to make the songs “perfect” it seems you’re trying to explain the music. But you have to do them as if it’s the most natural thing in the world. His writing duplicates the patterns of normal conversation. In recital the songs are a “heavy” sing because there is nowhere for you to hide – I can’t programme lighter songs to recuperate because I don’t know any Strauss songs where you can really recuperate! That’s what’s so great – it gives you that extra push. 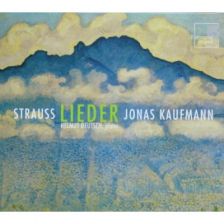