Ralph Vaughan Williams died 50 years ago this year so this release is timely indeed; but it’s also special because for such a practical musician there is far too little on disc of him as a conductor – only three commercial recordings in fact. This remarkable musical document dates from September 1952 when RVW was invited to conduct the second half of a Prom concert and present his Fifth Symphony (the Proms season that year contained the six RVW symphonies to date). Members of the London Philharmonic recalled the evening’s special magic and it has transferred to disc remarkably well. “Famously undemonstrative on the podium, the 79-year-old composer knows exactly what he wants,” wrote Andrew Achenbach in April, “in a reading which combines noble breadth, songful rapture and glowing sincerity.” The coupling is the first commercial release of Dona nobis pacem from the BBC archives from November 1936. In AA’s words it “conveys a blistering conviction which effortlessly surmounts any inescapable sonic limitations”. As he concluded, a disc “to relish”. 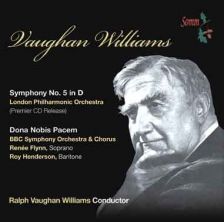