This was always likely to be a controversial winner: is it a reissue? How much of it is new? Where does it come from? Well, it’s certainly the first time that all 27 symphonies by Nikolai Myaskovsky (1881-1950) have been gathered together, along with a number of shorter works. The one real black mark against this set is the lamentable annotation but, as David Gutman said last month, “for anyone coming fresh to the composer and his world, the Warner set provides an extraordinarily economical, if potentially mystifying, entrée”. There is some remarkably fine music here: DSG singled out Symphony No 21. “The score’s most memorable idea, referencing Rimsky’s Antar Symphony, has that authentic Myaskovsky lyricism in spades and of course Svetlanov milks it for all it’s worth. Glorious heartfelt stuff although those brought up on more tautly controlled readings may cry self-indulgence.” The playing ranges from the “inspired to the sketchy” (DSG) but it’s a real labour of love from Svetlanov, and what a treat to discover a substantial and important symphonic oeuvre in a single go. 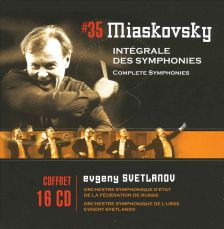