When this came through on the CD release sheets under the innocuous‑sounding title “The Copenhagen Ring”, there was no hint of the DVD event that this would become. A cast consisting of solid or up-and-coming Wagnerians rather than stars, a house not known for that composer and a conductor (Michael Schønwandt) who has never quite broken into the highest echelon of international maestri did not bode for anything special. Yet this superb, thought-provoking production in which every performer sings and acts their heart out proved a mesmerising experience, one which led Mike Ashman, in a full-page review, to rhapsodise about a production that “finds more heartbreaking emotion in Wagner’s drama than almost any since Patrice Chereau’s”. 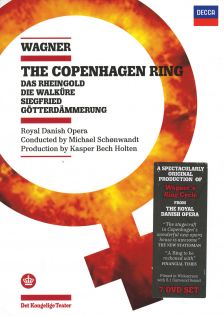