At its premiere in 1971, Leonard Bernstein’s Mass proved controversial, though the Washington Post declared it “the greatest music Bernstein has written”. Bernstein himself rated it amongst his most important works and Marin Alsop, one of his last students, has proved a tireless advocate of Mass. As she says: “What’s interesting…is just how prophetic it’s turned out to be. All those boundaries between genres, between different styles of music – they’re gone”. Gramophone’s editor, James Inverne, judged her recording a worthy successor to Bernstein’s own version, praising its “understanding of [Mass’s] myriad styles” and “convincing and coherent dramatic arc”. 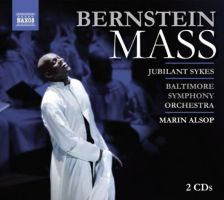