Those music lovers who know well Friedrich Gulda’s famous Decca set of Beethoven piano sonatas will find much to compare and contrast with here, in this collection of radio performances excavated from the archive and released in surprisingly good sound (given their age and provenance) by Orfeo. Many of the eccentricities that dog the Decca performances are absent here. All in all, though, this is a wonderful document, both as a reference for Gulda fans and as a collection of performances in its own right. As Rob Cowan enthused, “I cannot recommend it highly enough.”

The basic sense of observance always persisted in his Beethoven interpretations, so it’s fair to say that his basic outlook on the matter didn’t really change so much [over his three recordings of the sonatas]. But what’s most striking about the early recordings is the sureness in the approach – there is no grappling or searching – that I find very surprising. In the essence his image of these works remains the same – maybe that is the biggest surprise. No mistake, this is Friedrich Gulda’s Beethoven and even at this early stage the characteristics of his style come out very clearly. I remember the advice he gave me about Op 13, the Pathétique Sonata, and Op 31 No 3, the E flat major. He was very certain about rhythm, no unwanted rubatos, nothing of the kind. He used to say, “Don’t play it like a crazy man, don’t exaggerate.” So again you had a certain classical mould – be strict to the rhythm, don’t exaggerate, and don’t be Romantically subjective. 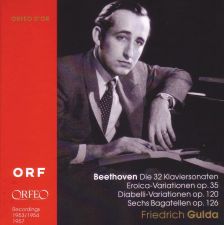