“One of Britten’s most unaccommodating works”, the Songs and Proverbs of William Blake were written for Dietrich Fischer-Dieskau, “more out of respect (it would seem) than affection”, wrote the late John Steane in his review, adding that “their focus is uncompromisingly serious”. JBS suggested that Finley does not (yet, maybe) command Fischer-Dieskau’s dramatic power, commenting that “the mantle of Elijah is not upon him”. In all else, however, “he is excellent: the De la Mare mini-cycle Tit for Tat, the tall story of the wonderful crocodile, the hauntingly dissatisfied ‘Greensleeves’, the comedy pieces for deaf woman and bird-scarer”. 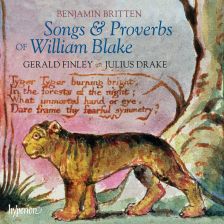