Abbado’s second Berlin Philharmonic symphony cycle, recorded live in Rome in 2001, thrust him more or less unexpectedly into the ranks of the immortals where Beethoven is concerned. Seven years after that, in Reggio Emilia in 2008, he conducted his first Fidelio, followed two years later by a pair of semi-staged Lucerne Festival performances from which this recording thrillingly derives.

The revised dialogue provided by stage director Tatjana Gürbaca is not without controversy. In Act 1, her cuts and rewrites remove all hint of domesticity and private affection; in Act 2, she omits just about everything. The result is Beethoven’s lofty Singspiel recast as musical meta-theatre. Happily, the cast is as fine as any that might be assembled today and Abbado himself conducts a performance the like of which we have not heard since the time of Furtwängler. It is a no-frills yet at the same time deeply expressive reading which goes like a bolted arrow directly to the heart of the matter. If Fidelio speaks as no other opera does of the miraculous resilience of the human spirit, Claudio Abbado’s late re-creation of it serves only to compound that miracle. 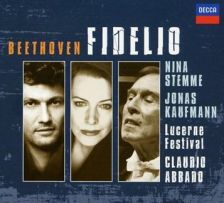