In association with EFG International

Phenomenal talent is often discovered early – but 11 years old, the age at which Benjamin Grosvenor won the keyboard section of the BBC Young Musician of the Year (the year Nicola Benedetti won the overall prize) is remarkably early indeed. Grosvenor’s name has been talked about ever since. The first recording to appear was a recital in 2010 called ‘This & That’, which led critic Bryce Morrison to write of Grosvenor’s ‘endless poetic finesse and resource’, before concluding that ‘To call such playing that of a master-pianist will invite accusation of exaggeration and hyperbole – but what else can I say?’ He was not alone in his view, and the following year Decca signed Grosvenor, making him the first British pianist since the likes of Clifford Curzon and Moura Lympany to join the label. And within months, aged just 19, he also became the youngest ever soloist to perform at the First Night of the Proms, when he played Liszt’s Second Piano Concerto with the BBC Symphony Orchestra and  Jiří Bělohlávek.

Of his first Decca disc, of music by Ravel, Chopin and Liszt – which has won the Instrumental Award category this year (see page  49) – Rob Cowan writes, ‘This is the artistry of an era I thought was long gone, the era of Cortot, Horowitz, Friedman, Cherkassky’. Illustrious company indeed; and, just to remind you, the remarkably gifted, masterly musician Grosvenor is still just 20 years old.  What a glorious career surely lies ahead of him. 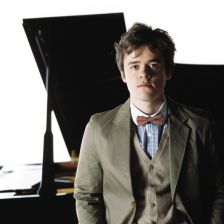