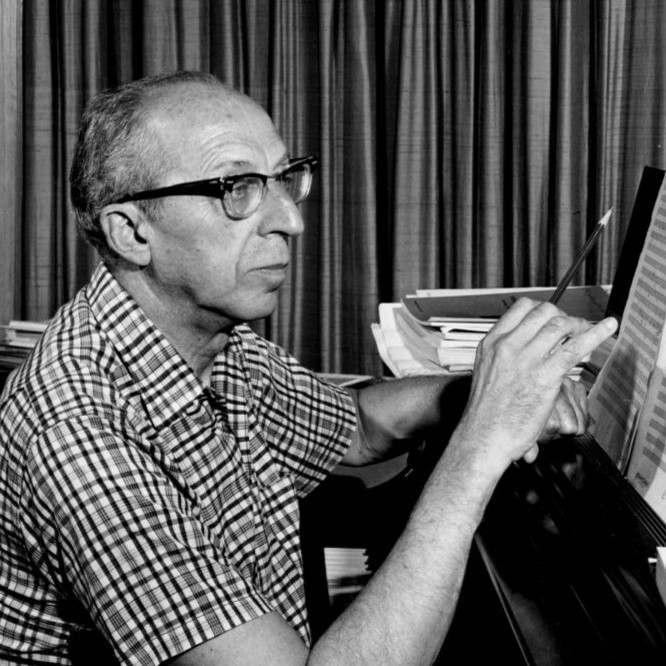 Aaron Copland managed the difficult feat of becoming a popular classical composer while retaining the respect of critics and the ‘serious musical establishment'.

Classic Aaron Copland interview: "I'd just like to get up there and tell them how my music should go"

Andrew Keener spoke to the American composer on the occasion of his 80th birthday in the February 1980 issue... Read more

Born in a humble street in Brooklyn, the son of Lithuanian immigrants, Copland is generally regarded as the first indisputably great American composer. The piano came easily to him and, after he’d graduated from the local high school, he had lessons in harmony and counterpoint from the eminent (though conservative) teacher and composer Rubin Goldmark. His first published piece, The Cat and the Mouse, appeared in 1920.

He was able to scrape together enough to go to Paris to study with the doyenne of European teachers, Nadia Boulanger. Here, during his four years at the New School for Americans at Fontainebleau (1921-25), Copland was introduced to an enormous range of musical influences, all of which he was encouraged to absorb: jazz, the neo-classicism of Stravinsky and the whimsicality of Les Six made a particularly strong impression on him and colour the first period of his mature compositions. With a thorough grounding in composition and orchestration under his belt, he returned to America where he became involved in a wide range of musical activities, working as a pianist in a hotel, as a lecturer and as an organiser of various musical societies, as well as composing.

Conductor, publisher and patron of music Serge Koussevitzky became an influential champion of his music throughout his tenure as conductor of the Boston Symphony Orchestra, an incalculable boost to Copland’s growing reputation. Between 1930 and 1936 he entered a phase of experimental and dissonant writing (Variations and the Piano Sonata, for instance, are difficult works) before discovering the power of American folk idioms. Here his music is as essentially American as Mussorgky’s or Stravinsky’s is Russian – El Salón México, the ballets Billy the Kid, Rodeo and Appalachian Spring are as American as apple pie. His Lincoln Portrait, using texts from Lincoln’s speeches and letters, has been performed (for better or worse, but generally worse) by world leaders. His patriotic Fanfare for the Common Man (1942) has been used for the opening of every type of formal ceremony. Some of Copland’s film music (The Red Pony, for example, Our Town and Of Mice and Men) is among the most distinguished ever written (he won an Oscar in 1950 for the score of The Heiress). In a nutshell, Copland managed the difficult feat of becoming a popular classical composer while retaining the respect of critics and the ‘serious musical establishment’. In his later works, Copland reverted to serial techniques, writing in a far less approachable, more austere manner.

Whatever one thinks of his virtually unknown middle- and late-period music, Copland has to be admired for his steadfast independence and unwillingness to court popularity for its own sake.