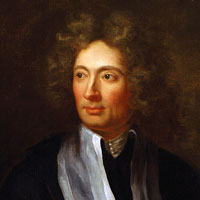 Corelli was the main founder of modern orchestral playing and the composer who fashioned two new musical forms, the Baroque trio and solo sonata, and the concerto grosso.

Coming from a wealthy family near Bologna, Corelli showed an early talent for the violin, and after spending the first part of his career in Rome, Paris (where Lully thwarted his hopes) and Germany, he returned to Rome for the rest of his life. His patron was the wealthy music-loving Cardinal Ottoboni (nephew of Pope Alexander VIII) and Corelli provided the music for his household. The fame of the Monday concerts held there spread all over Europe and Corelli’s reputation as the leading violinist of his day, together with the widespread publication of his music, placed him among the most influential musicians of the period. You can see this not only in the music of Purcell, Vivaldi, Handel and Bach but also in what he introduced to the art of violin playing – such things as asking the performer to play more than one note with a single bow stroke (before this it was always one note for each stroke) and playing two or three strings at the same time (double- and triple-stopping). His pupils Geminiani and Locatelli in turn passed on what they had learnt.

He insisted that the string players in his orchestra should all bow in the same way, a practice which led to unprecedented accuracy in performance and, said a contemporary, ‘an amazing effect, even to the eye, as well as the ear’. In this Corelli was the main founder of modern orchestral playing and the composer who fashioned two new musical forms, the Baroque trio and solo sonata, and the concerto grosso (a four- or five-movement work), the forerunner of the modern concerto: a solo passage interplays and contrasts with the whole orchestra (or tutti).

His music itself is passionless, balanced, almost mechanical, but the slow movements show the lyrical powers of the violin as never before with great dignity and serenity, and the fast outer movements are crisp, concise and jolly – in other words, the classical form of Baroque music.

Corelli was buried in the Pantheon in Rome near Raphael, leaving an estate of about £6000 (an exceptional amount in those days) and a collection of over a hundred paintings, including works by Bruegel and Poussin.