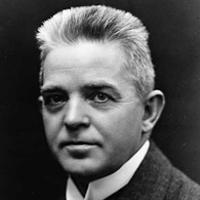 Anyone seeking a gentle introduction to 20th-century music could do worse than listen to the six symphonies by this remarkable composer, neglected by the musical world outside Scandinavia during his lifetime and only in the 1950s internationally recognised for what he was – Denmark’s most important composer. In his charming autobiography, My Childhood, Nielsen tells of his life on the Island of Fyn (or Funen) where his father was a labourer. The Danish soil and character (though not so much its folk music) pervades all his work; there’s an attractive, unsentimental directness about it and, though it has its bleak moments, a life-affirming spirit abounds, in music of clear-cut colours and structures.

Nielsen received his first rudimentary music lessons from his father, a keen fiddle player, and then took up the trumpet in the local band. (His first job was as a shepherd.) Apart from his elementary musical education at school, that was all the tuition he had before composing a string quartet, one which qualified him for admission to the Royal Conservatory in Copenhagen. Among his teachers was the esteemed Niels Gade, friend of Mendelssohn and Schumann, and the founding father of the Scandinavian school of composition. Nielsen’s career after this was devoted to playing the violin (in the Royal Chapel Orchestra), conducting all over Denmark and Europe – and composing. He died of a heart attack shortly after being made director of the Copenhagen Conservatory, a national hero.