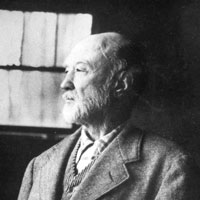 The devices that Ives introduced into his music – atonality, polytonality, dissonance, multiple rhythms, jazz, collage – were way in advance of the Stravinskys, Schoenbergs and Debussys of this world.

'He plunged ahead solely on the basis of his ear, his stamina, his conviction, his talent and his need to create' (John McClure, Gramophone, April 1967)... Read more

Charles Ives left his Concord Sonata for solo piano unfinished for a reason. But what that reason was remains unclear – which, says Philip Clark, presents a challenge to pianists who tackle the work on record... Read more

Many of Ives's works present unique challenges for the performers brave and dedicated enough to tackle them, let alone commit them to disc. Here are some of the finest Ives recordings in the catalogue... Read more

What an extraordinary man Ives was – and what extraordinary music! One can only sit back and wonder at his stubbornness, the way he expressed his personal vision and refused to be tied to any received wisdom. The devices that he introduced into his music – atonality, polytonality, dissonance, multiple rhythms, jazz, collage – were way in advance of the Stravinskys, Schoenbergs and Debussys of this world. They arrived at their own answers later and their music was widely performed; not so Ives – most of his music was not performed until the 1950s. Only then could it be seen by how much he had been ahead of his time. His stream-of-consciousness technique has been compared with the James Joyce of Ulysses and Finnegans Wake (though Ives anticipated Joyce in this too).

Where did it come from? His father, mostly – a remarkable band-leader who encouraged his son to ‘open his ears’ and listen to the noise made by two military bands playing different marches simultaneously, to note the out-of-tune singing of hymns in church: in other words to accept natural dissonance, not dismiss it. He even encouraged Ives to sing ‘Swanee’ in a different key to the one in which it was being played on the piano. The young Ives began to experiment, writing in a combination of several keys, first as a spoof, then as a serious proposition. No wonder his teacher at Yale was baffled by someone to whom Chopin was ‘soft…with a skirt on’, Mozart was merely ‘effeminate’, Debussy ‘should have sold newspapers for a living’. (He had higher opinions only of Bach, Beethoven, Schumann and Brahms.)

After graduating, Ives, with assured unpredictability, went into insurance. In 1907 he established the firm of Ives and Myrick (afterwards Mutual of New York) and he proved an exceptionally able businessman, for he ended up a millionaire. When, in 1918, he suffered a massive heart attack and was no longer able to work (diabetes added to the complications), he was able to publish at his own expense some of the vast amount of music he had written ‘out of office hours’ and distribute it free to interested parties. Few people were aware of his double life and Ives made no effort to procure performances of his work – he knew he had no hope of commercial success. When his music was performed, he appeared to be indifferent. By 1930 he had all but stopped composing.

He retired to his farm in Connecticut, becoming increasingly reclusive – he never went to concerts and did not have a record player or radio. Gradually, more of his music began to be played (his Third Symphony, written in 1903, won a Pulitzer Prize in 1947) but it was only after his death that his real achievements were recognised and, indeed, he has become something of a cult figure, an example to any composer who feels faint-hearted in following his instincts and developing independent musical thought. ‘Ivesian’ has entered the language to describe a certain kind of music.