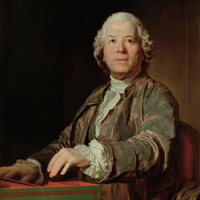 Gluck's was one of the most influential opera composers of his time and works such as Artaserse, Orfeo ed Euridice and Iphigénie en Aulide are still regularly performed today.

Gluck's Orfeo ed Euridice: which recording should you buy?

Orfeo ed Euridice, the opera in which Orpheus placates the Furies with his lyre to rescue his beloved, exists on many recordings in at least two versions. In Gluck’s tercentenary year, Richard Wigmore picks the best... Read more

Ten of the finest Gluck recordings, including long-established classics alongside some rarities... Read more

Gluck’s father was a forester and, like Handel’s, actively discouraged his son from playing any musical instruments when it was obvious that he had such a talent. Gluck left home at 18 and for the next 25 years flitted all over Europe in pursuit of his musical career: first to Prague where he supported himself by playing at dances and singing in churches, then to Vienna, afterwards (in 1737) to Milan. There he studied with Sammartini, one of the first symphonic composers, and absorbed all there was to know about Italian opera. Four years later he had his first success with Artaserse and decided to move on to London. He met Handel, who liked him but couldn’t stand his music. Gluck kept a portrait of Handel in his bedroom for the rest of his life. He left London to travel the length and breadth of Europe for the next 15 years as a composer and conductor, tossing off operas in the Italian style and becoming more and more dissatisfied with what he was doing. Eventually he married the daughter of a wealthy Viennese banker, which made him financially independent. Then, in 1760, famous and successful as he was, collaborating with two others, he wrote a ballet, Don Juan, based on Molière’s play, which broke with convention – it was more human, more truthful and aspired to far greater dramatic effect than anything currently on offer. In 1762 one of his collaborators, the extraordinary playwright, critic and lottery organiser Ranieri de’ Calzabigi, who was entirely in tune with Gluck’s ideas, came up with the libretto of Orfeo ed Euridice. It did for opera what Don Juan had done for ballet. Audiences had heard nothing like it before. Neither had musicians. Gluck was a perfectionist with an acute ear and simply would not tolerate sloppy playing. His abrupt manner and dictatorial demands made him the Toscanini of his day, insisting that players repeat passages 20 or 30 times until he was satisfied with the result. In 1773 he visited Paris with his wife and adopted daughter, a fine singer. There he composed Iphigénie en Aulide and also produced it, after long rehearsals in which he had to correct acting and vocal styles that had not altered since the days of Lully. It precipitated a furore among French musicians and commentators, rival composers and music lovers. Even Queen Marie Antoinette played a small part in the battle by coming to the defence of Gluck (before her marriage, he’d taught the Austrian princess singing and harpsichord). In the end, the powerful Italian clique headed by the composer Niccolò Piccinni was defeated and Gluck returned to Vienna triumphant, though greatly saddened by the premature death of his daughter. Perhaps his own health persuaded him to remain in Vienna after 1779, for he had suffered several ‘apoplectic seizures’ – probably minor thromboses. Hailed throughout Europe as its leading musical master, Gluck survived for a further eight years until a final stroke killed him.