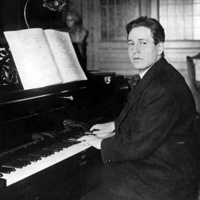 One of the most highly-regarded and influential composers in the history of film music. His concert works, particularly his Violin Concerto, also continue to prove hugely popular with musicians and audiences.

Among the many concert hall composers seduced by cinema were Shostakovich, Korngold and Copland. Yet each brought an individual outlook and had very different experiences, relates Andrew Farach-Colton... Read more

Korngold was the son of the music critic Julius Korngold (1860-1945). He studied with Zemlinsky and had spectacular early successes with his ballet Der Schneemann (1910) and operas Violanta (1916) and Die tote Stadt (1920). In 1934 he went to Hollywood at the invitation of Max Reinhardt and wrote some fine film scores. The Adventures of Robin Hood won him an Academy Award for Best Original Score and he was subsequently nominated for The Private Lives of Elizabeth and Essex (1939) and The Sea Hawk (1940). At the Anschluss, Korngold, as an Austrian Jew, remained in Hollywood for the duration of the war (he became a US citizen in 1943). After the war he wrote orchestral and chamber pieces, including his now hugely popular Violin Concerto.