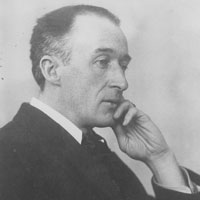 The sound world of Delius is immediately recognisable – warm, luminous orchestral colours, hazy, impressionistic tone pictures tinged with a romantic glow. It is hard to hum a Delius tune (yet they’re there) or to see where the music’s going (he was at his best fantasising, dreaming, drifting), yet the ravishing, luminous beauty of his music is equally hard to resist. No one (unless you include popular music arrangers) followed in his footsteps. He belonged to no tradition; he led nowhere.

Delius was a truly international voice in an increasingly nationalist age. Jeremy Dibble traces the composer’s travels and the works that resulted... Read more

The sound world of Delius is immediately recognisable – warm, luminous orchestral colours, hazy, impressionistic tone pictures tinged with a romantic glow. Hard to hum a Delius tune (yet they’re there) or to see where the music’s going (he was at his best fantasising, dreaming, drifting), yet the ravishing, luminous beauty of his music is equally hard to resist. No one (unless you include popular music arrangers) followed in his footsteps. He belonged to no tradition; he led nowhere.

His father, Julius Delius, was a successful Prussian industrialist who had settled in Bradford, the owner of a wool company. Frederick was destined to follow in his footsteps and in 1882 was sent over to run the orange groves his father had purchased in Solano, Florida. Here, he had a Damascus-like conversion: hearing the close harmony of the African-American singers wafting across the St John River, he realised that music must be his life. (His Appalachia Suite, variations on an old slave song, reflect his time there.) He’d brought his violin with him – Delius was good enough to make a favourable impression with the Mendelssohn Concerto – and on a trip to Jacksonville in search of a piano, met up with an American organist called Thomas F Ward who gave him lessons in music theory. In six months, so Delius said, he learnt more from Ward than in the three years of formal training he undertook subsequently at the Leipzig Conservatory (father Delius relented in the face of his son’s determination and the oranges were left to ripen under someone else’s care). ‘[Ward] showed wonderful insight in helping me to find out just how much in the way of traditional technique would be useful for me.’

However uncongenial he found Leipzig, one benefit was meeting Grieg there and the two became close friends. Indeed, Scandinavia exercised a lifelong hold over Delius’s imagination and music (he’d first travelled there as a young man), and when, after graduating in 1888, he moved to Paris, he mixed with painters and poets (more than musicians) who were predominantly Scandinavian.

Delius married the painter Jelka Rosen in 1897  and moved to the village of Grez-sur-Loing near Paris, which was to remain his home for the rest of his life. He became increasingly reclusive. Visitors were rarely welcomed and when they were invited chez Delius, they would often be met with profound silence or dismissed abruptly when the host could stand their company no longer.

From the age of 40, his unique voice began to assert itself; the pleasant but derivative works of the previous two decades gave way to the distinctive Delius sound – A Mass of Life, Sea Drift, Brigg Fair and In a Summer Garden. Germany took to his music readily and England too, after a reluctant start, mainly due to Thomas Beecham, a lifelong ardent champion of Delius’s music.

The Deliuses spent the war years in England and Norway but by the early 1920s his creative powers faltered. Paralysis and blindness set in, the result of contracting syphilis in Paris in the 1890s. That might have been that, had it not been for the intervention of the young Yorkshire musician Eric Fenby, who offered his services as amanuensis to the ailing Delius. Beecham organised a festival of six concerts in 1929 devoted entirely to Delius’s music which the composer attended (he mounted a second in 1949). ‘He was carried in his invalid chair, propped up by cushions, down the gangway to a waiting ambulance,’ wrote his sister. ‘All that the pressmen could see was a figure with silvered hair, wearing a grey felt hat, a heavy overcoat, with his sightless eyes shielded by tortoise-shell glasses and a pale, wrinkled, ascetic face.’ This was the first and only time Delius heard his music cheered to the echo by his compatriots. It was his last public appearance.

The final four years of his life were spent in excruciating pain alleviated by constant doses of morphine. When he died, he was buried at Grez; but a year later friends arranged for the transferral of his body to England, where he was buried in the quiet country churchyard of Limpsfield in Surrey.