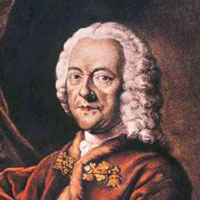 Telemann was probably the most prolific composer in musical history. He wrote almost as much as Bach and Handel put together (and each of them wrote a perplexing amount) including 600 French overtures or orchestral suites, 200 concertos, 40 operas and more than 1000 pieces of church music.

The son of a clergyman, Telemann was a virtually self-taught musician – he had an uncanny ability to soak up knowledge, and from a variety of disciplines. Science, languages and jurisprudence seem to have been his subjects at the University of Leipzig. By then he had picked up the violin, the zither and the oboe as well as a reputation as a brilliant organist. Most of his music theory was gained by studying the scores of the older masters such as Lully. He wrote operas and cantatas for the Collegium Musicum he founded while still a student in Leipzig and thereafter held a succession of posts – as organist and kapellmeister in Sorau (Poland), and as music director in Eisenach and Frankfurt. In 1721 he was offered the prestigious job of music director of St Thomas’s Church in Leipzig. He turned it down to become city musical director in Hamburg, where he stayed for the rest of his life. The third choice for the post in Leipzig was JS Bach. (Telemann, incidentally, was godfather to Bach’s son Carl Philipp Emanuel.)

He was a popular figure – his lively mind and genial high spirits are caught in his music – but his private life was not so happy: his first wife died in childbirth; by his second wife he had eight sons and two daughters, few of whom survived infancy, but she later abandoned him for a Swedish army officer. Like Bach and Handel, Telemann suffered from failing eyesight as he grew older. It was Handel who said, famously, ‘Telemann could write a motet for eight voices more quickly than one could write a letter’. Music, Telemann thought, ‘ought not to be an effort’ and he disarmingly asserted that ‘a good composer should be able to set public notices to music’.

Telemann was probably the most prolific composer in musical history. He wrote almost as much as Bach and Handel put together (and each of them wrote a perplexing amount) including 600 French overtures or orchestral suites, 200 concertos, 40 operas and more than 1000 pieces of church music. All of Telemann’s music is extremely well fashioned and elegant; his technique is sophisticated, combining the operatic elements of Italian Baroque, the German contrapuntal style and the French school of dance-based suites.