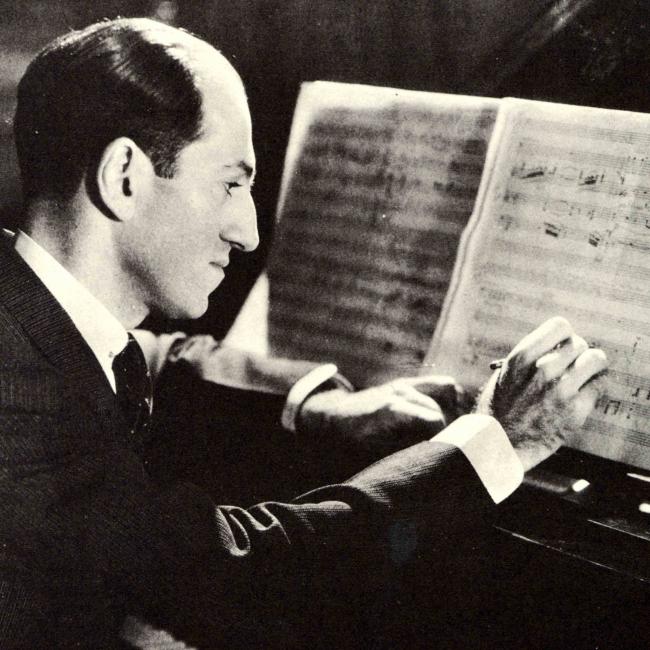 No composer has done more to weld the two opposing cultures of serious and popular music together. The works he fashioned with his miraculous melodic gift have stood the test of time and changes in musical fashion, proving to be among the most treasured of all American music.

75 years after Gershwin's premature death, Jeremy Nicholas asks: what would he have done next?... Read more

After Gershwin's Rhapsody in Blue, what next?

Is there anyone, from the most sophisticated to the musically illiterate, who doesn’t get a kick out of Gershwin? No composer has done more to weld the two opposing cultures of serious and popular music together (a road that is still in the process of being mapped out, let alone built). The tragedy is that he didn’t live long enough to develop all his ideas.

His father, Morris Gershowitz, bought a piano in 1910 initially for Ira, his elder son, but it was Jacob (later George) who took to it like a duck to water. Within four years he was good enough to get a job playing popular songs in music shops. He had some lessons with the top New York teachers (piano with Ernest Hutcheson and Charles Hambitzer, harmony with Edward Kilenyi and Rubin Goldmark) but no one can teach a composer the gifts with which Gershwin was blessed. Before he was 20 he had written a Broadway hit, La La Lucille. In the score was the hit song ‘Swanee’. It sold more than a million copies in sheet music and over 2,250,000 records, setting him up for life. An early string quartet went by unnoticed, as did a serious one-act opera, while he turned out hit after hit musical containing songs like ‘Fascinating rhythm’, ‘Lady be good’ and ‘The man I love’, with lyrics usually by his brother Ira.

Gershwin was a man possessed of phenomenal energy and ambition, and it was inevitable that he should want to prove himself in more demanding music. The bandleader Paul Whiteman provided the catalyst by asking for a concert piece. The result was Rhapsody in Blue. The first performance on February 12, 1924 (attended by the likes of Rachmaninov, Stravinsky and Toscanini) was a triumph – if controversial – and it made Gershwin internationally famous overnight. The only question was over his ability to orchestrate. Ferde Grofé, Paul Whiteman’s arranger, had done the job on the Rhapsody. The following year Gershwin produced his Piano Concerto in F, orchestrated by himself. Successful as he was while continuing to write Broadway shows, Gershwin still felt under-educated musically and asked to study with Ravel and Nadia Boulanger. Ravel turned him down. ‘Why do you want to be a second-rate Ravel,’ he asked, ‘when you’re already a first-rate Gershwin?’

Other concert works followed (Second Rhapsody and Cuban Overture) but it was his inspired An American in Paris that scored his next success in the field. During the last years of his life he spoke of plans for a symphony, a string quartet, a ballet and a cantata based on the Gettysburg address. None of these was achieved. What he did complete was an ambitious folk opera based on the novel Porgy by Dubose and Dorothy Heyward. It was not immediately popular – some eminent black composers, including Duke Ellington, did not like it, the serious music critics sniffed at it and Gershwin’s usual audience was bamboozled by its very seriousness. Its acceptance as one of the great operas of American music came only after Gershwin’s premature death at the age of 38 from an inoperable brain tumour.