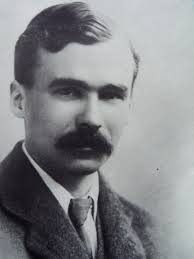 Drawing inspiration from English folk songs, George Butterworth is one of the great 'what ifs?' of musical history. Who knows what he might have achieved had his life not been cut tragically short at the Somme in 1916?

George Butterworth first displayed his musical ability as a child, receiving music lessons from his mother (a singer), and began composing at an early age. He gained a scholarship to Eton, where he again showed early musical promise, before joining Trinity College Oxford, becoming president of the university music society.

George Butterworth famously claimed ‘I’m not a musician, I’m a professional dancer,’ and commented that dancing gave him more artistic fulfilment than anything else. In 1911, Butterworth’s passion led him to become a co-founder of the English Folk Dance Society along with Cecil Sharp, who was 16 years his senior, and the sisters Helen and Maud Karpeles. The society’s purpose was to preserve and promote English folk dances in their original forms, and in 1912 and 1913 Butterworth devoted much of his time to collecting morris and sword dances with Sharp. Butterworth was a talented dancer and one of six members in Sharp’s original morris-dancing team. Their performances during December 1912 at Stratford and the Savoy Theatre, which Granville Barker attended, are credited with prompting the important if short-lived historical movement that brought folk dancing to the world of Shakespeare.

Butterworth was also an active member of the Folk-Song Society, which was founded in 1898. From 1904, the society became the focus of the new wave of folksong collectors led by Cecil Sharp and including Ralph Vaughan Williams (with whom Butterworth would become close friends). George Butterworth joined in 1906 while he was at Oxford. Butterworth’s keen involvement in the collection and preservation of English folksong clearly influenced his style of composition.

At the outbreak of the First World War, Butterworth enlisted in the British Army, eventually rising to the rank of Lieutenant in the Durham Light Infantry until his life was tragically cut short, killed in action at the Battle of the Somme in 1916.