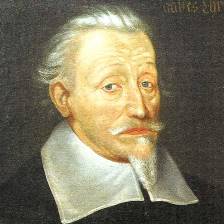 Schütz was the greatest German composer of the 17th century and the first of international stature.

In 1598 Schütz was taken to Kassel, where he served as a choirboy and studied music with the court Kapellmeister, Georg Otto. The University of Marburg followed, where he studied law, but his patron, Landgrave Moritz, advised him to abandon his university studies and to go to Venice as a pupil of Giovanni Gabrieli; Schütz remained in Venice for over three years. The following year he was seconded to serve for two months at the electoral court in Dresden, and in 1615 the Elector Johann Georg I requested his services for a further two years – this was again extended and Schütz remained in his permanent employ. There his responsibilities included providing music for major court ceremonies, whether religious or political.

In 1619 Schütz published his first collection of sacred music, the Psalmen Davids, dedicated to the elector. Towards the end of the 1620s economic pressures of the Thirty Years War began to affect the electoral court and in 1628 Schütz decided on a second visit to Venice, where he was able to study developments in dramatic music under Monteverdi’s guidance. He returned to Dresden in 1629 but two years later Saxony entered the war, and in the following years Schütz worked in Copenhagen, Dresden, Copenhagen again, Brunswick and (in semi-retirement) Weissenfels. He was far from inactive during his remaining 15 years. Schütz was the greatest German composer of the 17th century and the first of international stature. His output was almost exclusively sacred.