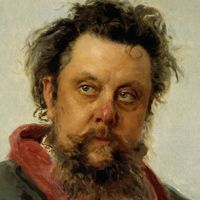 Mussorgsky wanted to express the Russian people in music. 'When I sleep I see them, when I eat I think of them, when I drink – I can visualise them.'

Here's our guide to 10 of the finest recordings of Mussorgsky's music, from the ever-popular Pictures from an Exhibition to the hidden treasure of the Nursery songs... Read more

Mussorgsky’s musical talent was nurtured by his mother (he was good enough to play a John Field concerto by the age of nine) and, as a 13-year-old cadet at the military academy, he began writing an opera, though he had had no formal musical training. In 1856 he took a commission in the élite Preobrajensky Regiment. Borodin was then a medical army officer and remembered him as something of a fop with signs of pretentiousness: ‘He spoke through his teeth and his carefully chosen words were interspersed with French phrases…he showed quite unmistakably perfect breeding and education.’ The following year he was introduced to Balakirev and Cui, and he also became friendly with the critic Stasov, the main champion of Russian national music. Already a heavy drinker, Mussorgsky abandoned his military career forthwith.

In 1861, when the serfs were emancipated, his family went bankrupt, forcing him into paid work as a clerk in the Ministry of Communications. During the next four years he composed continuously, though his lack of a formal musical education led him to abandon most of the works he began. He resigned from his job in 1865 and when, two years later, Stasov made his famous declaration about the ‘mighty handful of Russian musicians’, Mussorgsky was ready to take up the challenge with his comrades-in-arms Balakirev, Borodin, Cui and Rimsky-Korsakov: ‘The Mighty Five’.

By this time, Mussorgsky was living in abject poverty and well on the way to becoming an alcoholic, struggling to get his thoughts down on paper. In 1869 he entered government service again, this time in the forestry department. Simultaneously he worked on what was to become his greatest masterpiece, the opera Boris Godunov, which eventually (after many revisions) saw the light of day in St Petersburg in 1874. Its success was tempered by strong criticism by Mussorgsky’s fellow musicians and this upset him greatly. Cui attacked the work for its immaturity and ‘lack of technique’. Now a dipsomaniac, Mussorgsky began a second opera, Khovanshchina (left incomplete at his death), still managing to write some fine music, but his concentration and lifestyle had disintegrated. The artist Rapin recalled how often Stasov ‘on his return from abroad was hardly able to get him out of some basement dive, nearly in rags, swollen with alcohol’. Intermittently, Mussorgsky appeared as a pianist and accompanist but he was now hopelessly ill, suffering from delirium tremens and epileptic fits. He died following one such fit just a week after his 42nd birthday.