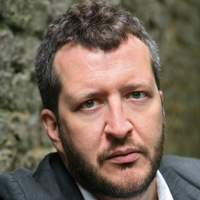 A composer, pianist and conductor of extraordinary talent, Thomas Adès became a major player on the classical music scene in his early twenties.

One of the leading lights in contemporary classical music, pianist/conductor/composer Thomas Adès’s meteoric rise to international musical prominence has been phenomenonal. He gained early success as a pianist, winning second prize in the 1989 BBC Young Musician of the Year, then read music at King’s College, Cambridge (1989-92). Among the works from his student years are his first opus, Five Eliot Landscapes (1990) and the Chamber Symphony (1990) – his first work to receive a professional performance. In 1993 he became Composer in Association to the Hallé Orchestra for which he wrote The Origin of the Harp (1994) and These Premises are Alarmed (1996). His most performed work, Living Toys (1993), brought him widespread critical acclaim, though it was the chamber opera Powder Her Face (1995) that earned him an international reputation.

In 1998 he became artistic director of the Birmingham Contemporary Music Group and the following year, for his first large-scale orchestral work, Asyla (1997), he received the Ernst von Siemens Prize and the Grawemeyer Award. Also in 1999 he became joint artistic director of the Aldeburgh Festival. His 2004 opera, The Tempest, was a commission from the Royal Opera House, Covent Garden. Adès’s compositions showed exceptional assurance of style and technique from the start, and his success had much to do with the unmistakable presence of a personal accent in music which blends vividness of detail with a clear sense of compelling overall design. His piano concerto In Seven Days is a collaboration with his then partner, Israeli video-artist Tal Rosner. It was premiered in London in April 2008. Other recent works include the orchestral score Tevot (2007), premiered by the Berlin Philharmonic under Sir Simon Rattle, a longstanding champion of Adès’s music. A second collabaration with Rosner produced Polaris, a work for orchestra with five video screens and conceived for the opening of the New World Symphony's new home in South Beach, Miami. It was first heard in 2011 under Michael Tilson Thomas's direction.

Adès also maintains a busy schedule both as a pianist – he regularly works with cellist Steven Isserlies, with whom he has recorded a disc for Hyperion – and as a conductor.