Stuck for ideas of hi-fi gifts to buy for a music lover? Audio Editor Andrew Everard has some suggestions

Ask the average hi-fi enthusiast what’s on their Christmas list, and after that moment of reverie when they wonder whether you’re good for that £10,000 pair of speakers they’ve always fancied, they’ll snap back to reality and mumble something like ‘Don’t really know – think I’ve got everything I need …’

That’s not strictly true: there’s always something you can find even for the best-equipped music lover, so I’ve tried to find some ideas from around the fringes of audio to bring something new to their listening – or simply give them new ways to enjoy their music. 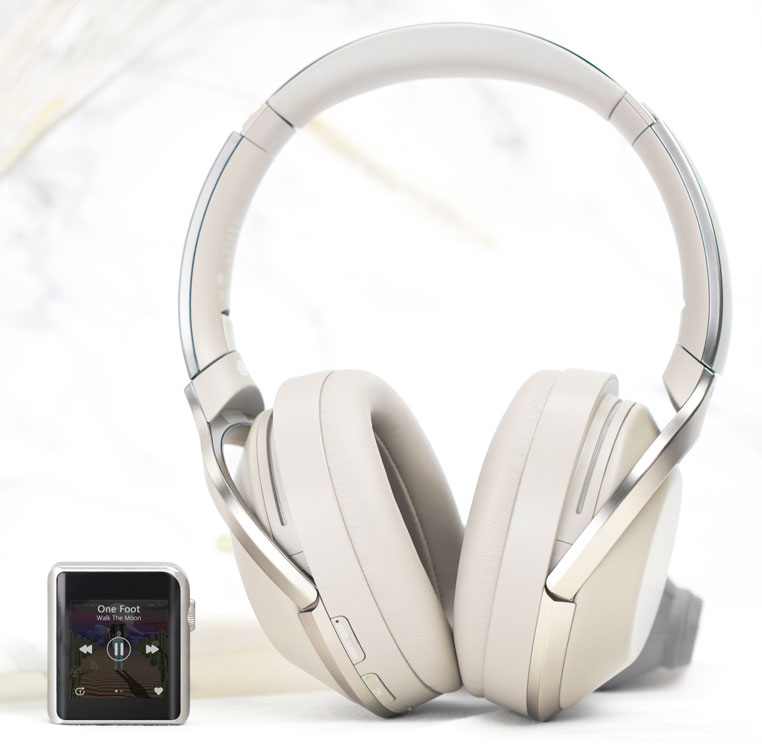 The ability to take your music with you has been part of the audio landscape since the very first Sony Walkman machines appeared, and while it’s possible to carry a significant library on a smartphone these days, a purpose-built player has the advantages of allowing you to listen to higher-resolution content wherever you are – not to mention ensuring you arrive wherever you’re going with some phone battery left!

The tiny Shanling m0 player, selling for just under £100, has been one of the finds of 2018: packed into this minute aluminium-bodied player is the wherewithal to play music all the way up to DSD quality, as well as operating as a wireless digital-to-analogue converter for your computer or portable device, or even playing music through a Bluetooth-equipped home system And it’s all controlled using a sharp, bright touchscreen display occupying the whole front of the 4x4.5cm device. Charged from a computer or a standard phone charger, it stores its music on microSD cards, and weighs next to nothing. 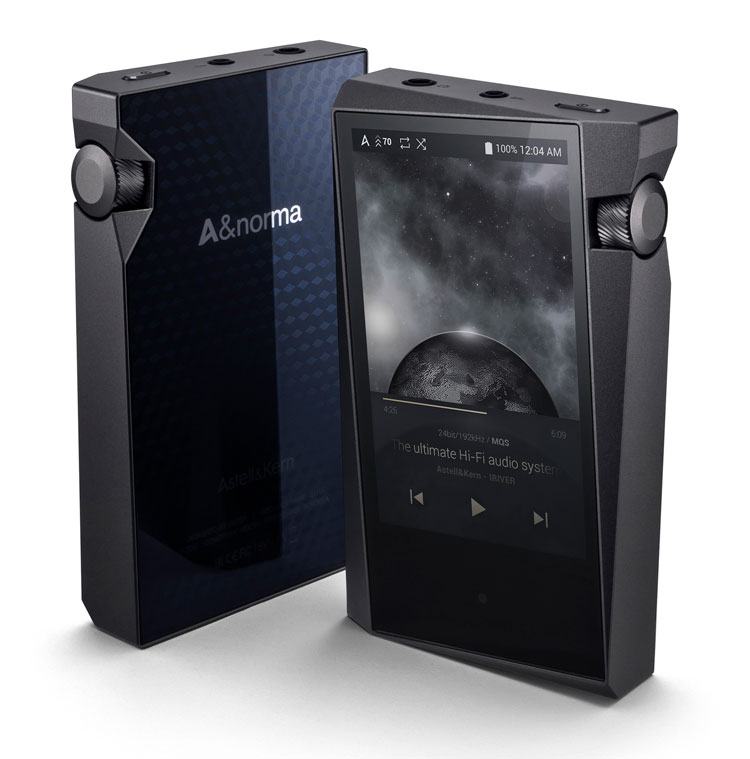 If you fancy your personal music player of slightly more conventional dimensions, this curiously-named model from pocket music machine experts Astell&Kern is sure to appeal. Selling for £599, it’s part of the company’s more affordable range – it has players all the way up to the £3000 A&ultima SP1000 – and yet is built to the same very high standards for which the Korean company has become famous.

The styling is certainly eye-catching, with its full-length screen set at a jaunty angle on the front of the casework, which is made from solid aluminium and beautifully finished. And within is a very flexible, high-quality player, able to handle files all the way up to DSD128, and not only play them through headphones or a hi-fi system, but even act as a USB audio source for external digital-to-analogue converters.

The onboard conversion is top-notch, and there’s plenty of power to drive demanding headphones, with a balanced output available should you have a pair of headphones able to support it.

The xDSD, selling for £399, is quite possibly the best portable digital-to-analogue converter/headphone amplifier on the market – and when I say portable, this is a real slip-in-the-pocket device, at just 9.5x6.7cm and under 2cm thick. Yet inside is state of the art digital processing drawing on the expertise of iFi parent company Abbingdon Music Research, amplification able to deliver a crystal clear, powerful sound with everything from compressed MP3 through to ultra-high-resolution DSD, and real-world battery life. It’s all wrapped in very covetable casework, the all-metal, fluted design adding style as well as making it easy to hold, and it weighs just 127g.

Whether used on the desk fed from a computer, or out and about with a phone or tablet – connected using the Apple Camera Connection kit or an Android OnTheGo cable – the xDSD is a truly thrilling listen, with 3D+ and bass boost functions available should you need them. It can even connect to your portable devices via Bluetooth if you want, and has the wherewithal to drive some very superior headphones, thanks to clever internal amplifier design. 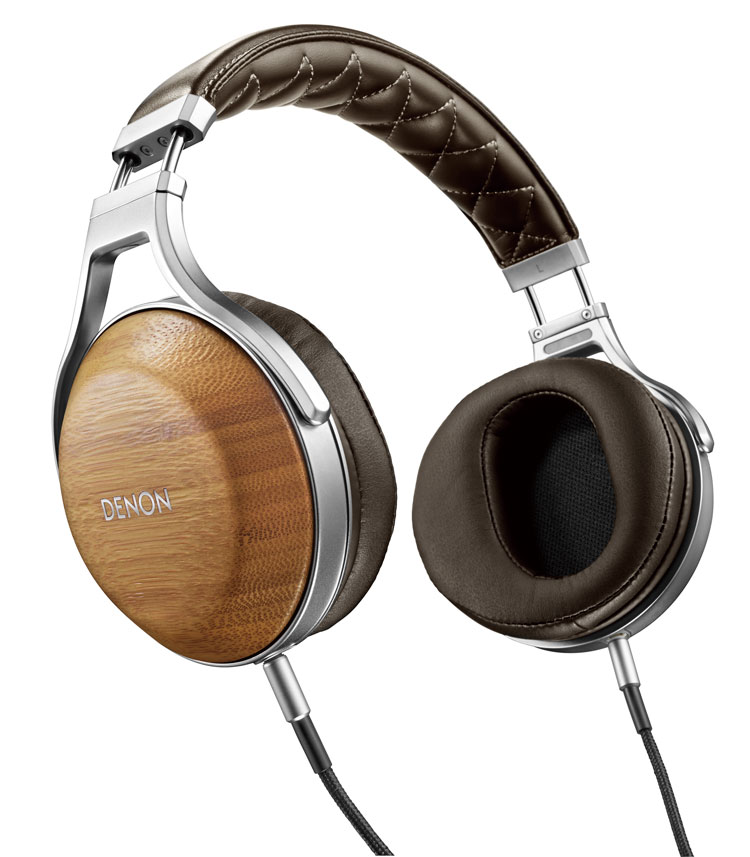 Talking of superior headphones, they don’t come much more so than this flagship model from Denon, selling for £1399. Perhaps better chosen for listening at home than out and about on the move, they combine natural Japanese bamboo housings with Denon’s own driver technology to striking effect, and are handmade by the company’s technicians, so no two pairs look quite the same.

A lot of headphone companies have sprung up of late, but Denon has been in the business for more than 50 years – and it shows in the AH-D9200.  They use in-house FreeEdge drivers with nanofibre diaphragms, driven by high-power neodymium/iron/boron magnets for powerful highly accurate sound. The ear-cushions combine memory foam and engineered leather for a comfortable fit and the best sound, with the headband covered in leather.

The Denon headphones come complete with a high-quality case, and are supplied with two cables – one for your hi-fi system and the other should you want to listen to them with portable devices. 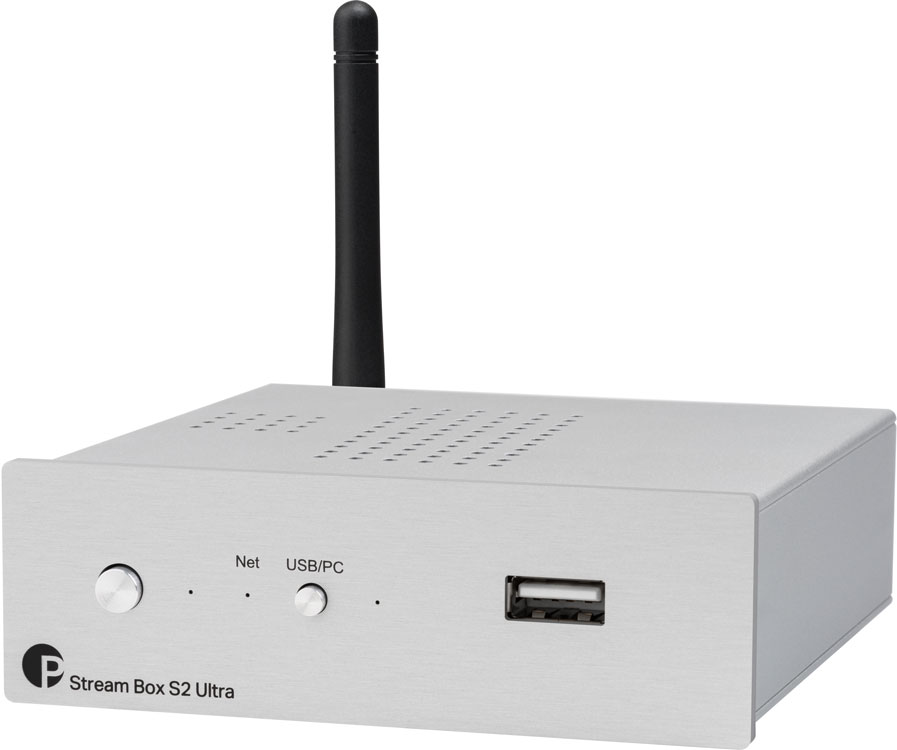 If you have an amplifier or system with a USB digital input, it’s easy to upgrade it to full music-streaming capability with this little unit from Pro-Ject, perhaps best known for its part in the turntable revival, but also the maker of a wide range of BoxDesign miniature hi-fi units.

Selling for £599, the Stream Box is built around commonly available technology, being based on a Raspberry Pi motherboard and the Volumio streaming platform, but the expertise of digital designer John Westlake has been brought to bear in delivering the purest possible sound with everything from low-bitrate audio all the way up to DSD. Connected to a home network and controlled from a tablet or smartphone, the tiny box can stream music from local storage as well as services including Tidal, Spotify and Internet radio.

Its USB output is optimised for audio quality, and it can also be plugged between a computer and an audio system, where it will perform what its designed calls ‘digital detox’. You get all this in a package just 10.5cm square and less than 4cm tall! 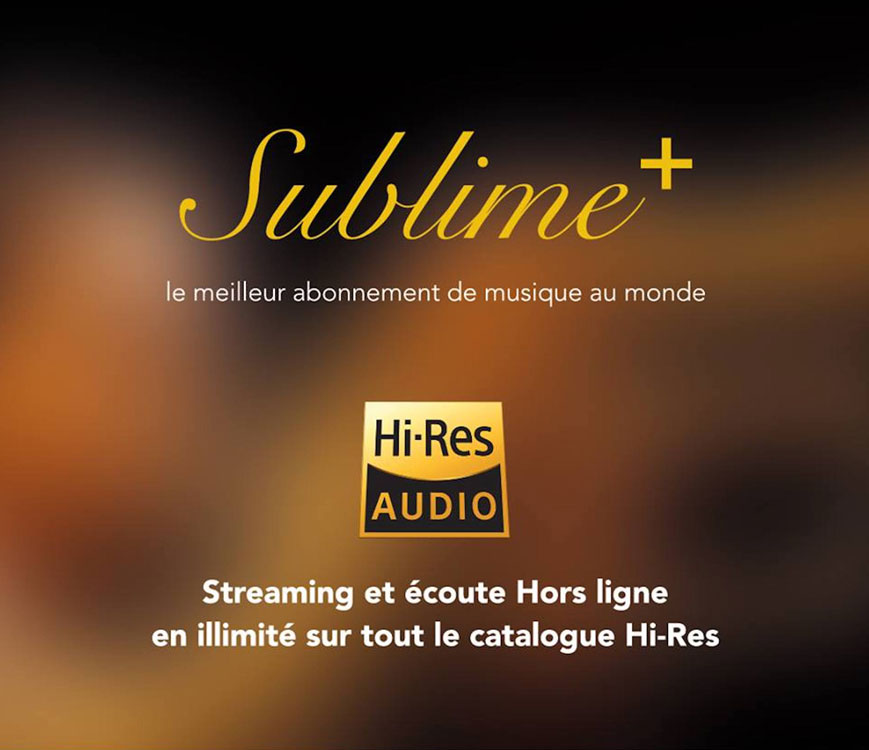 Streaming services are revolutionising the way many are listening to music, and French company Qobuz is gradually expanding its offering, having recently launched its streaming operation into the US market. As well as selling music in a variety of standard- and high-resolution formats as downloads – the neat touch is that, if you buy a hi-res download, you also get lower-resolution versions for your portable devices, the company now allows you to stream its entire catalogue in high resolution if you want.

A variety of plans are available, and which would be the best choice really will depend on your requirements: the flagship offering, Sublime+, gives unlimited streaming at up to 192kHz-24bit, plus discounts on hi-res downloads, for £299 a year, and would make a pretty impressive gift of music.

Alternatively, if all that’s required is just the streaming service, it’s possible to get hi-res streaming for £249.99 a year, and CD quality at £199.99, with monthly payment plans available on these lesser services. 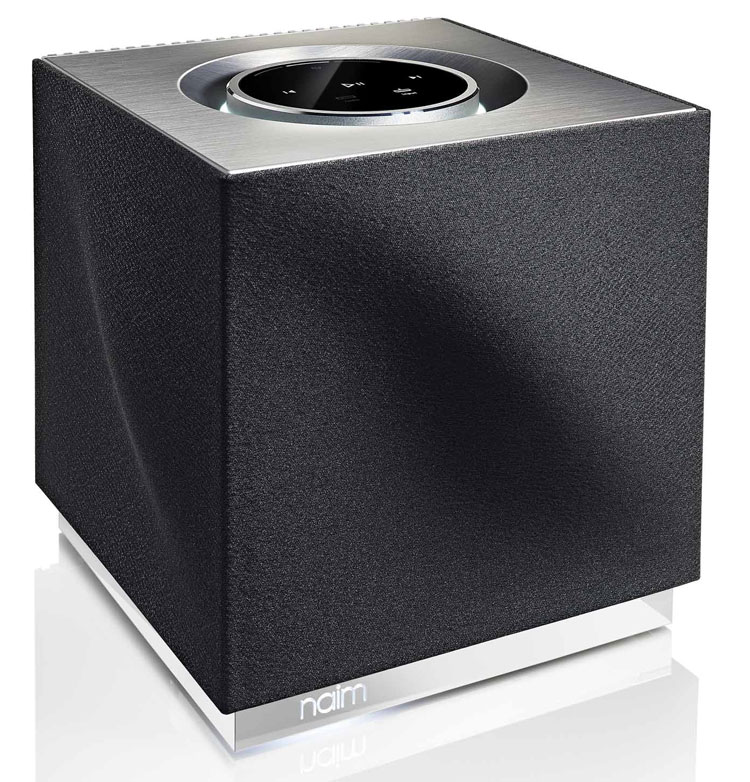 The smaller of Naim’s two network music all-in-ones, the £599 Mu-so Qb remains a superb design, combining as it does network and online streaming in a compact unit perfect for use in a study, bedroom or kitchen, and all with the usual excellent Naim sound. It’s a near-cube – hence the name – around 21cm on each side, with a large multifunction control on the top which lights up along with the acrylic base when it’s switched on.

As well as streaming music from your computer and other storage, it can also access online services such as Tidal and Spotify, and has analogue, optical digital and USB inputs for external devices from TVs to memory. Behind the interchangeable wraparound grille, available in a choice of colours, the Qb uses a single treble driver, two midrange units, and a bass driver with two auxiliary low-frequency radiators, all driven by 300W of amplification to give a room filling sound.

Control of the Qb is via the Naim app on a smartphone or tablet, and multiple devices can be combined to give multiroom audio. 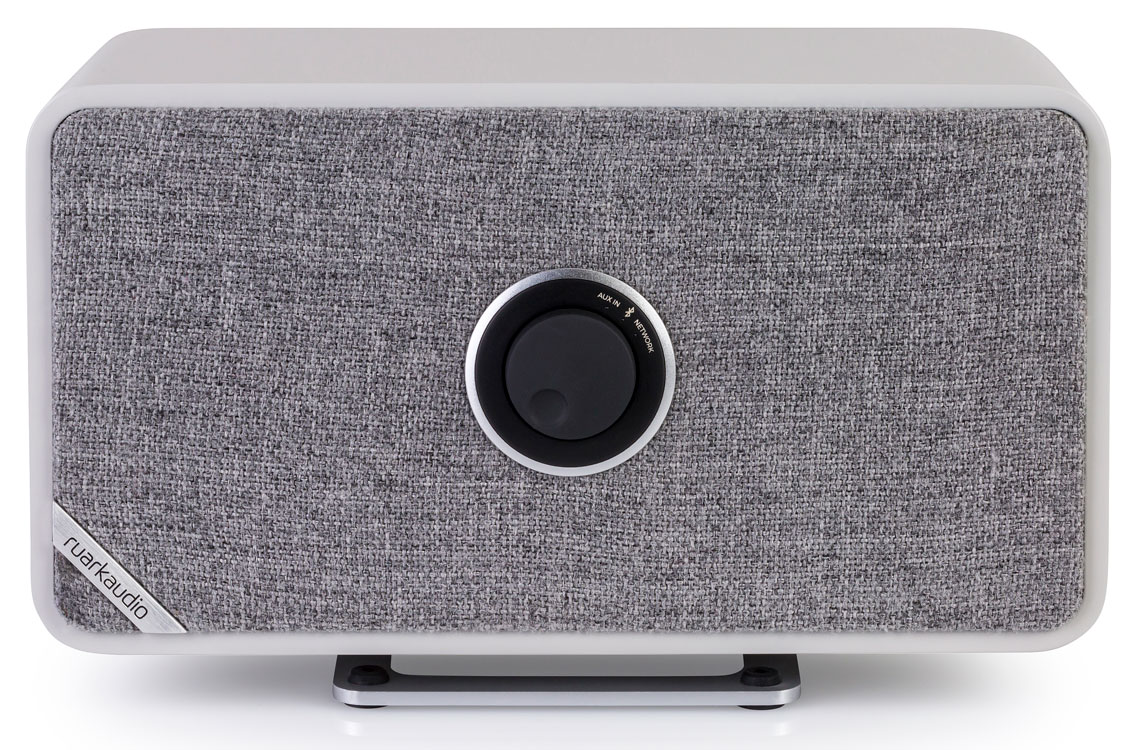 From its beginnings as a speaker manufacturer, Ruark Audio has built a strong reputation as a maker of tabletop audio, notably with its R1 radio, which has been developed over several generations and is still a fine performer. Its £399 MRx wireless speaker takes the fine sound and stylish design for which the company is known, and applies it to streaming audio, creating a compact unit which can be used alone under the control of the company’s Link app, or combined with its R2 and R7 models for whole-house audio.

The MRx uses new Ruark-developed drivers – a stereo pair of them with bass tuning ports inside the compact cabinet – combined with enhanced signal processing to improve the stereo image from a speaker just 30cm wide and 18cm tall and deep. Inputs extend to Bluetooth and a combination analogue/digital socket, and the MRx can stream from portable devices, computers, internet radio and online services such as Spotify and Tidal, with more promised in the near future.

Completing the package is a beautifully finished enclosure in a choice of walnut or soft grey, and the MRx can even be used vertically to fit into tight spaces. 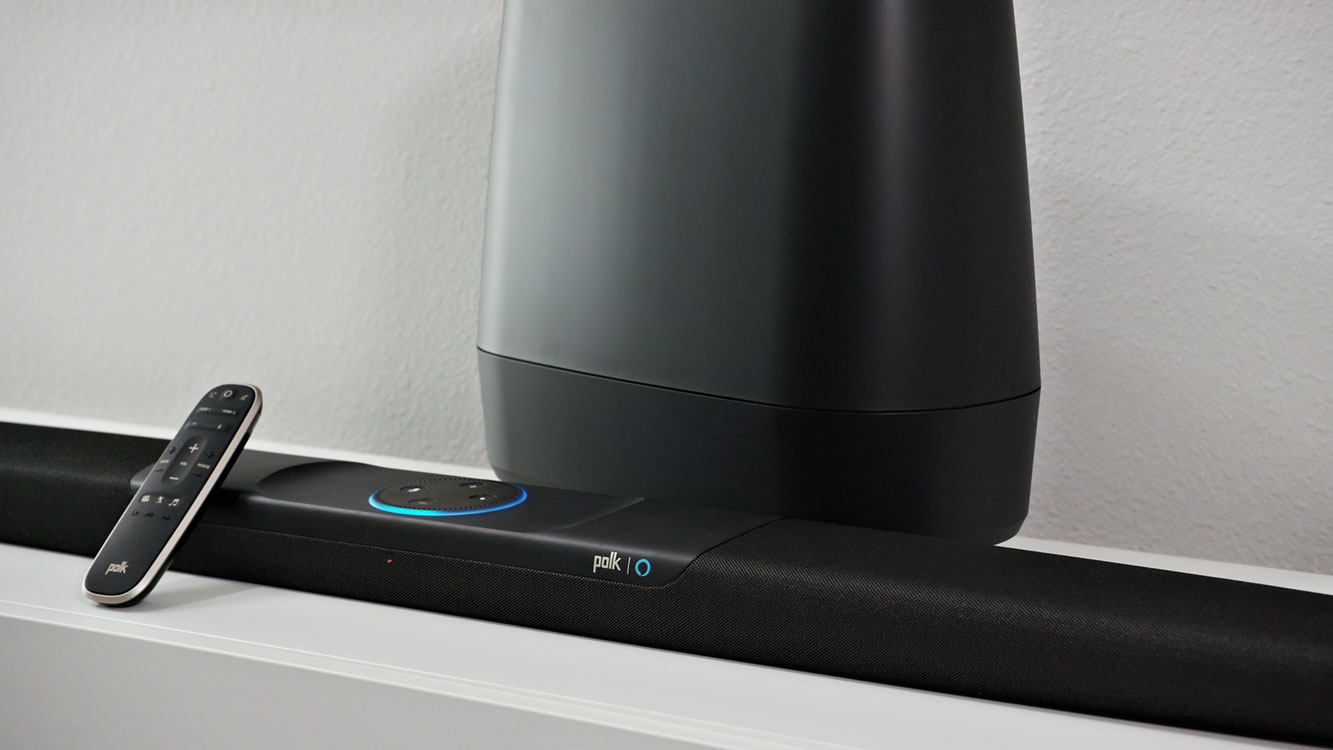 The idea of a soundbar to improve the sound of your TV is a familiar one, and with festive TV usually promising a wide array of music broadcasting, such a device is the perfect Christmas gift for those who don’t want to go the whole way and connect their TV to a hi-fi system. After all, the very latest slim TVs really don’t have that much space for speakers able to match their striking picture quality.

However, the £249 Polk Command Bar, as the name suggests, goes somewhat further than just improving your TV sound: it has Amazon’s Alexa voice control system built-in, enabling you to control what it plays, adjust the volume and so on simply by speaking a command, and can also stream network and online audio services. What’s more, it can also act as an access point for voice-controlled heating, lighting and the like, working with other Alexa units around the house, and connects to the TV with a single HDMI cable. There’s even a slot in the back to accept an Amazon Fire TV Internet streaming stick.

At just 5cm tall, the Command Bar is slender enough to sit in front of any TV screen, while the subwoofer supplied with it ensures a rich, deep sound. 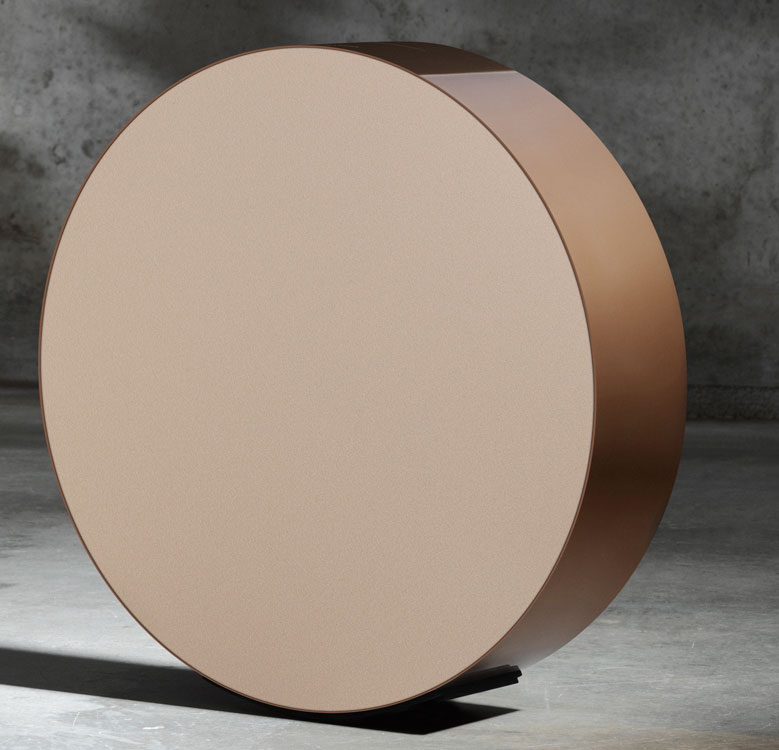 Bang & Olufsen has long been known for its combination of innovative and eye-catching design with striking sound quality, and now it has added a novel twist with the arrival of its Bronze Collection, making use of its enormous experience of – and huge facilities for – working and anodising the aluminium from which so many of its products are made.

The bronze look has been applied to a range of the Danish company’s products, starting from £599 with the little BeoPlay M5 wireless speaker, combining the glowing finish to the aluminium with a wraparound wool fabric cover from Kvadrat. All of the models in the range have wireless mutiroom capability, including the disc-shaped BeoPlay A9 on it tripod stand, and the conical BeoSound 1 and 2 models.

But perhaps the most striking is the £2900 BeoSound Edge, a coin-shaped speaker sitting on the floor or mounted on a wall, with a novel control system: roll it one way a little to turn up the volume, and back the other way to decrease the level. We’ve come a long way from little net bags of foil-covered chocolate coins …