The Austrian cinephile, with her dreamlike, surreal and audacious music, is hugely inspired by director David Lynch, finds Paul Kilbey

The music of Olga Neuwirth (b1968) is richly allusive, moving freely between reference points as varied as Monteverdi, Weill, Miles Davis and Klaus Nomi. She has cited influences from Boulez to the Beastie Boys. Yet if there’s one artist whose aesthetic approach seems particularly close to hers, it isn’t a musician at all – it is film-maker David Lynch, the maverick director behind such cult classics as Twin Peaks (1990-91; 2017), Lost Highway (1997) and Mulholland Drive (2001). Bizarre juxtapositions, surreal narrative twists, vivid images of obscure significance: his films are not just strange but also uncanny – even inexplicable at times – as they journey into dreamlike worlds in which the standard rules of time, space and sense seem to drift away. Music may be a more abstract medium than film, but Neuwirth’s work proves its ability to be just as fascinatingly unfathomable. Her music is enthralling and provocative not despite its strangeness, but because of it.

The Lynch comparison is one that Neuwirth provoked herself when she turned Lost Highway, the film that some call Lynch’s very strangest, into an opera in 2002-03, in collaboration with her Nobel Prize-winning compatriot Elfriede Jelinek. It is hard to imagine a more audacious choice of film to receive the operatic treatment, but Neuwirth’s fragmentary, multidimensional music creates something that somehow does seem to be the kindred spirit of the original. At one point in both film and opera (some time before he inexplicably transforms into a car mechanic), the protagonist Fred explains why he doesn’t own a video camera. ‘I like to remember things my own way,’ he says. ‘How I remembered them. Not necessarily the way they happened.’ Perhaps the opera takes a similar approach in adapting the film, twisting it into new shapes – hyper-expressionist vocal acrobatics for one character, deadpan spoken word for another, eerie falsetto vocalise for a third – while retaining the plot and enhancing the noir undercurrent. In fact, perhaps that is what all opera does anyway, taking the kernel of a story and heightening its intensity through clipped lines of text and sweeping currents of music. To be sure, opera seldom portrays events ‘the way they happened’.

Jelinek has been quite a frequent collaborator, also having worked on Neuwirth’s first full-scale opera, Bählamms Fest (1992-98), which was based on an obscure play by Leonora Carrington. Also, Todesraten (1997) and Der Tod und das Mädchen II (1999) both combine (German) words by Jelinek with Neuwirth’s unpredictable, ever-shifting music. Among Neuwirth’s many other literary projects is an operatic ‘Homage to Herman Melville’, The Outcast (2008-10; rev. 2012), and she is currently working on a version of Virginia Woolf’s time-travelling, gender-switching fictional ‘biography’ Orlando for the Vienna State Opera in 2019. American Lulu (2006-11) is a reworking or ‘new interpretation’ of Berg’s masterpiece that moves the action to the US and sets it amid the civil rights movement. Another audacious concept, yes, but one that encapsulates both Neuwirth’s angular relationship to her Romantic and modernist Austrian heritage and her abiding fascination with jazz, a genre of particular significance to her since she started out as a trumpet player with a desire to be the next Miles Davis. It was only after a car accident in her teens ruled that option out that she focused her attention on composition – but she forgot about neither jazz nor popular music. ‘In the 1980s, I was a punk living in the Austrian countryside,’ she has written.

What is the result of all this? A musical style that jump-cuts between genres and reference points at a rate of knots; a language that twists and fragments like a dream narrative. Her concert work can be just as disorientating as her stage work – not that the line between the two is always clear-cut. Construction in Space (2000-01) is a prominent example: this 45-minute piece for large ensemble is an altered version of her music for The Long Rain (1999-2000), a filmed adaptation of Ray Bradbury’s short story of the same name, but the music holds up superbly without the visuals. Something filmic perhaps remains in this hyperactive, fiercely intense composition, which veers unpredictably from one episode to the next as ghostly electronic interludes drift between – but the sense of cinematic drama does not depend on visuals to support it, not least because Neuwirth requests a peculiar concert set-up in which the four instrumental ensembles and four soloists are positioned square around the audience (‘as in a boxing ring’) with the electronics overhead. Even the audio recording on Kairos, though, creates a fantastically vivid sonic picture. The work is dedicated to Pierre Boulez, who conducted the premiere of Neuwirth’s Clinamen/Nodus (1999) in 2000, and she has written of her deep affection for ‘the Olympus of contemporary music’. Her ever colourful, endlessly detailed sonic palette is surely a point of comparison – but there is something wild and capricious about the Austrian’s music that is also quite different.

It’s also difficult to imagine Boulez writing a horror movie soundtrack, but the cinephile Neuwirth did so for the acclaimed Goodnight Mommy (2014), a deeply sinister story of twin boys who don’t recognise their mother after she has reconstructive surgery. Neuwirth’s darkly fragile score, which features a glass harmonica and a musical saw, whispers drawn-out fragments of lullabies amid a bleak electronic tapestry. Music for film has been significant for her in recent years: as testament to this, two film scores of hers will be heard within two weeks of each other in London this autumn, one at the Southbank Centre (Maudite soit la guerre) and one at the Barbican (Stadt ohne Juden).

Even ‘abstract’ works of hers, with no apparent visual element, often seem awash with images. Hooloomooloo (1996-97) is a dazzlingly coloured piece for three instrumental ensembles, all circling around a pure electronic tone. ‘The composition is a pulsating movement that can attract and repel the listener, draw them in to the sound and throw them out,’ she wrote of it. It is inspired by a similarly colourful artwork by Frank Stella, which likewise plays complex, ambiguous games with texture and depth. Her trumpet concerto …miramondo multiplo… (2006) weaves an unpredictable web of references (Handel, ‘Send in the Clowns’, the opening of Mahler’s Fifth Symphony) to create a subtle, dreamlike effect. Remnants of Songs … an Amphigory (2009), a viola concerto heard at the 2012 BBC Proms, also delights in the unexpected, or even the nonsensical (an amphigory is a piece of nonsense writing, and Edward Lear is among Neuwirth’s inspirations).

Nonsense is seldom just nonsense, of course, as proven by the obsessiveness with which people search for hidden meanings in Lynch’s films. The trick, perhaps, is hinting enough that meaning always seems to be just around the corner, only for it to disappear again when you step towards it. Lynch has said he may not even agree with his co-creator about what’s going on in Lost Highway: ‘Barry [Gifford] may have his idea of what the film means and I may have my own idea, and they may be two different things. And yet, we worked together on the same film. The beauty of a film that is more abstract is everybody has a different take.’ This is true in an abundance of music as well – and Neuwirth’s other-worldly compositions surely revel in this ambiguity. 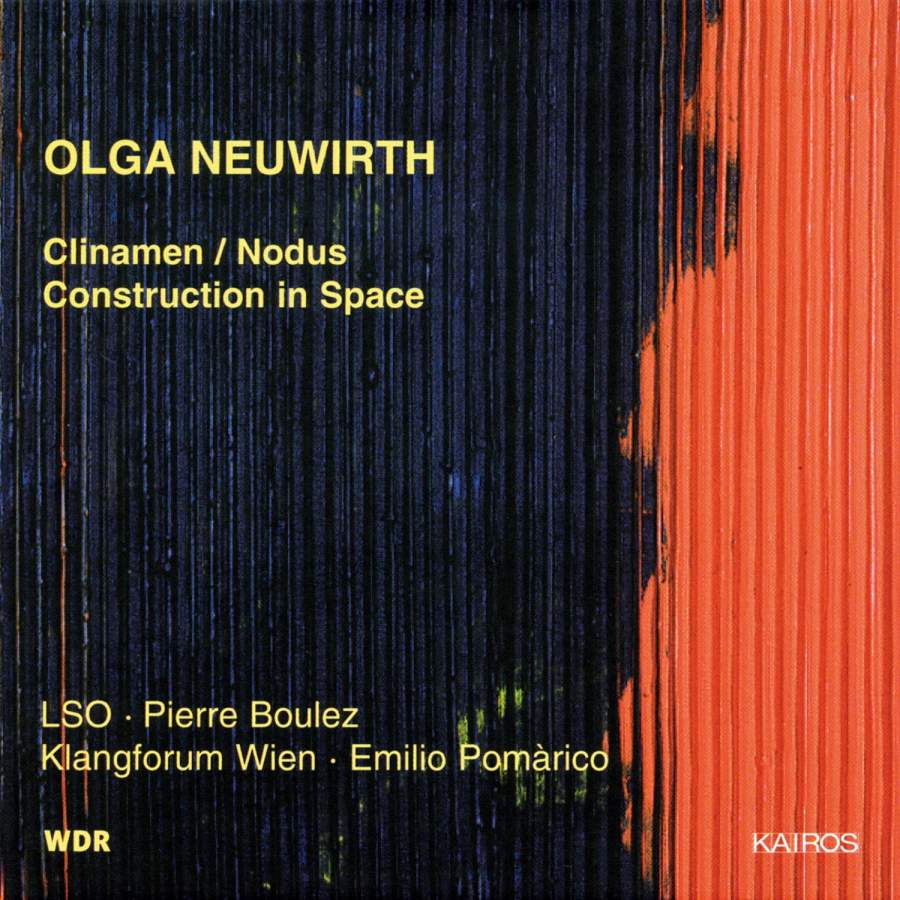 Neuwirth’s huge orchestral work Construction in Space is scintillatingly performed by Klangforum Wien in this 2001 recording. Kairos also released a DVD of Neuwirth’s film works, including The Long Rain, on which this is based. 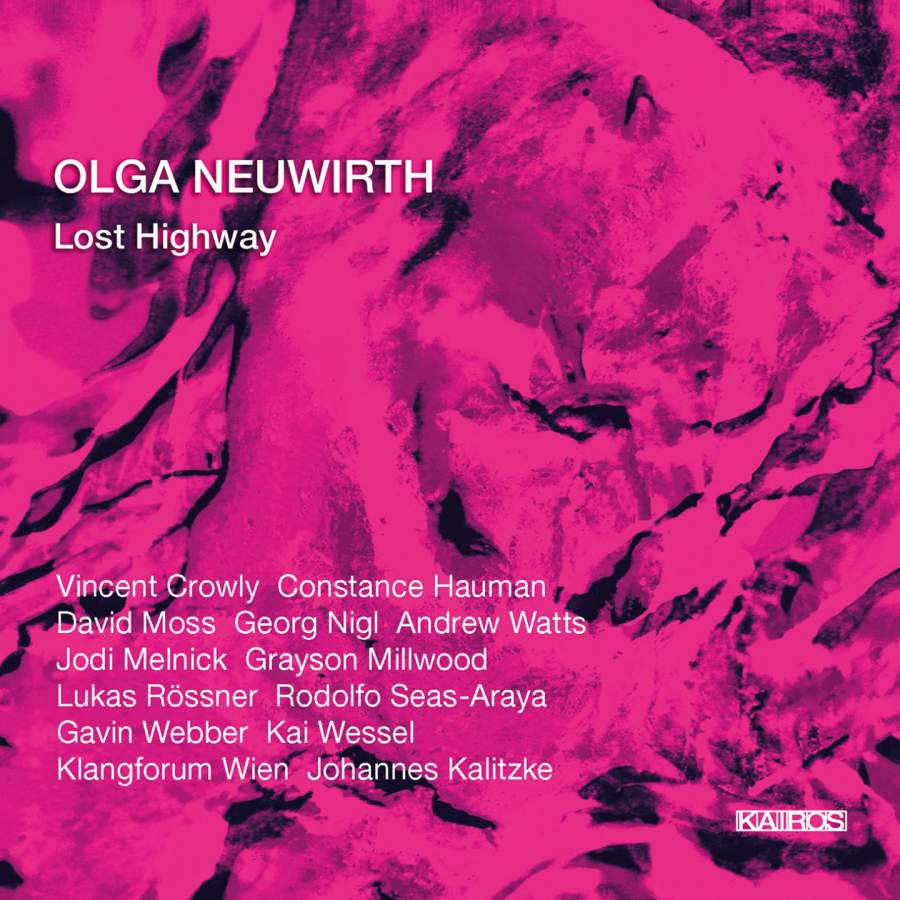 An award-winning opera recording from Graz  (2003) vividly conveys the opera’s manic, sinister energy, with its fine cast including a splenetic David Moss. 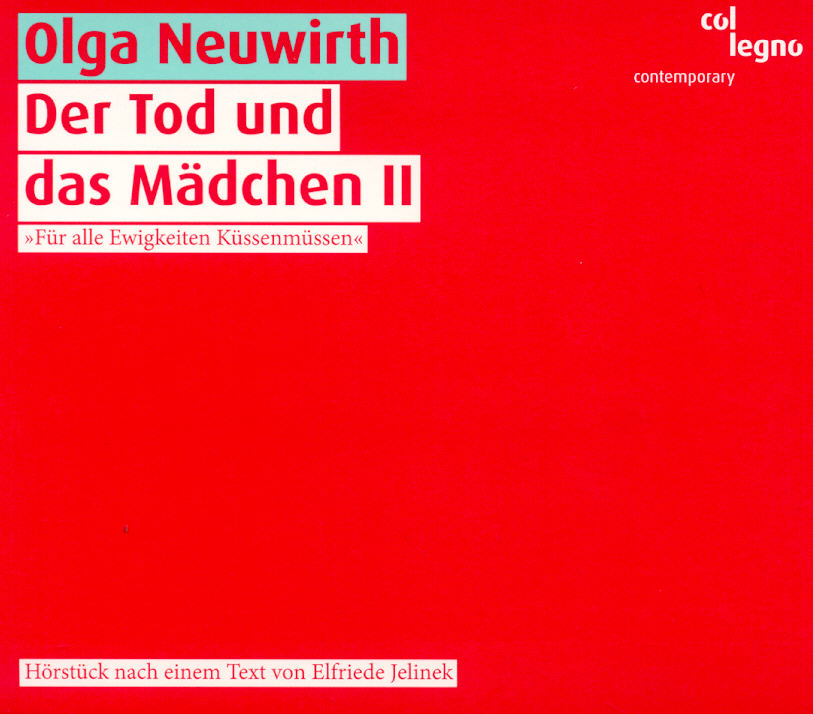 Elfriede Jelinek’s complex, dark reinterpretation of the Sleeping Beauty myth is spoken in German above a subtle and haunting electronic soundscape by Neuwirth in 2000.