Our guide to the best recordings of Elgar's Cello Concerto. 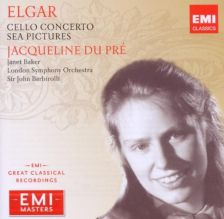 Though both Jacqueline du Pré and Janet Baker were already well established and widely appreciated in 1965, this disc marked a turning point for both of them in their recording careers. With John Barbirolli so warm-hearted and understanding an accompanist to each, these are both in every sense classic performances that can never be replaced.

Jacqueline du Pré’s Elgar has been all the more appreciated, since her tragic illness took her away as a performer. In principle her espressivo may be too freely romantic, but the slow movement and epilogue remain supreme in their intensity, conveying in whispered pianissimos of daring delicacy an inner communion, while the bravura of the brilliant passages remains astonishing from an artist still only 20.

Until this recording, Sea Pictures had tended to be under-prized even among Elgarians; but the passion, intensity and sheer beauty of this performance with each of the five songs sharply distinct rebutted any idea that – in reflection of verse of varying quality – it had anything of sub-standard Elgar in it. It’s a work you’ll probably never be able to listen to again without hearing in your mind Janet Baker’s deeply individual phrasing on this disc. What strikes you most is the central relevance to Baker’s whole career of the last stanza in ‘Sabbath morning at sea’, a radiant climax. ‘He shall assist me to look higher’ says the Barrett Browning poem, and the thrust of meaning as she sings it invariably conveys a frisson such as you rarely get on record. 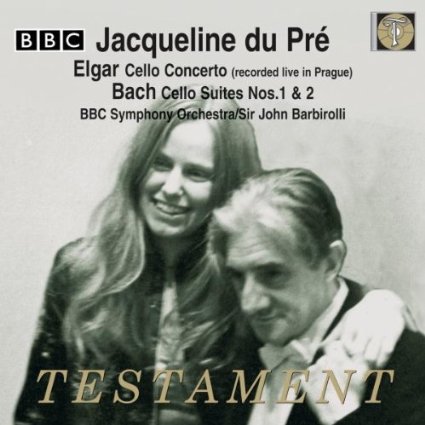 Jacqueline du Pré was 20 when she recorded Elgar’s Cello Concerto with John Barbirolli and the LSO in August 1965 – an interpretation universally acclaimed for its profound expressiveness. A second recording, taped live in 1970 with Daniel Barenboim and the Philadelphia Orchestra, has proved more controversial; du Pré’s radiant intensity remains undimmed but instead of the nobility found in the EMI account one hears desperation, or something close to it.

This new Testament disc makes public another live document, recorded in Prague with Barbirolli and the BBC Symphony Orchestra. The general shape of this performance resembles the EMI recording, not surprisingly given that the studio session had taken place a little more than a year before. But while du Pré was always an electric player, the voltage clearly increased before an audience. One hears the difference immediately as she digs into the opening solo with startling urgency. Tempi, in general, are noticeably faster; and although Barbirolli and the orchestra occasionally fall behind, the phrasing is longer-breathed and the sections flow more smoothly one into the other.

Du Pré (onstage and a year on from the EMI version) finds a greater variety of mood in the score. The dolcissimo Elgar asks for at fig 8 (starting at 3’58” in the first movement) evokes an audible smile in the cellist’s sound, for example. Or try her magical way with the swooping phrase at 3’10” in the Adagio: the high note is floated beautifully in the studio but in concert her tone and timing take one’s breath away. Best of all, perhaps, is the finale’s Poco più lento (beginning at 6’42”), where du Pré’s playing has an emotive force and eloquence akin to the greatest Shakespearean oratory – Barbirolli and the orchestra provide splendid support here.

Youthful (and previously released) interpretations of Bach’s first two Cello Suites round out the disc but the Elgar here is valuable enough to merit the highest possible recommendation. 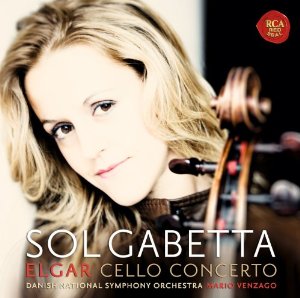 Sol Gabetta’s Elgar Concerto is one of the best around, a heartfelt, tonally rounded performance, intimate and wholly at one with Mario Venzago’s generally subtle handling of the orchestral score. Check out the passage after the opening cadenza, where the main subject is handed seamlessly between soloist and strings, or Venzago’s sensitive shaping of the woodwinds’ third idea or Gabetta’s nimble, catch-me-if-you-can Scherzo. Hers is a softly spoken presence, especially beautiful in those infinitely sad modulations that fall towards the end of the piece. It’s a real contender, and the fill-ups, although relatively brief, are by no means insubstantial.

The opening of Sospiri, where Gabetta enters on a whisper and strings fall about her as if from above, deathly quiet, is extraordinarily effective, and by adding a prominent brass presence to Salut d’amour, Søren Barfoed (who arranged all three Elgar miniatures) lends the piece a rich extra serving of local British colour. La capricieuse loses none of its playfulness through being darker and deeper in tone than when played on the violin, and both the Dvořák pieces suit the programme’s overall mood of peaceful reflectiveness. Gabetta is gentle in Respighi’s Adagio con variazioni but she shows her technical mettle on the bonus CD of Pēteris Vasks’s striking solo piece The Book, where she explores and exploits just about every virtuoso effect in the book which includes, in the Dolcissimo second movement, singing while playing. 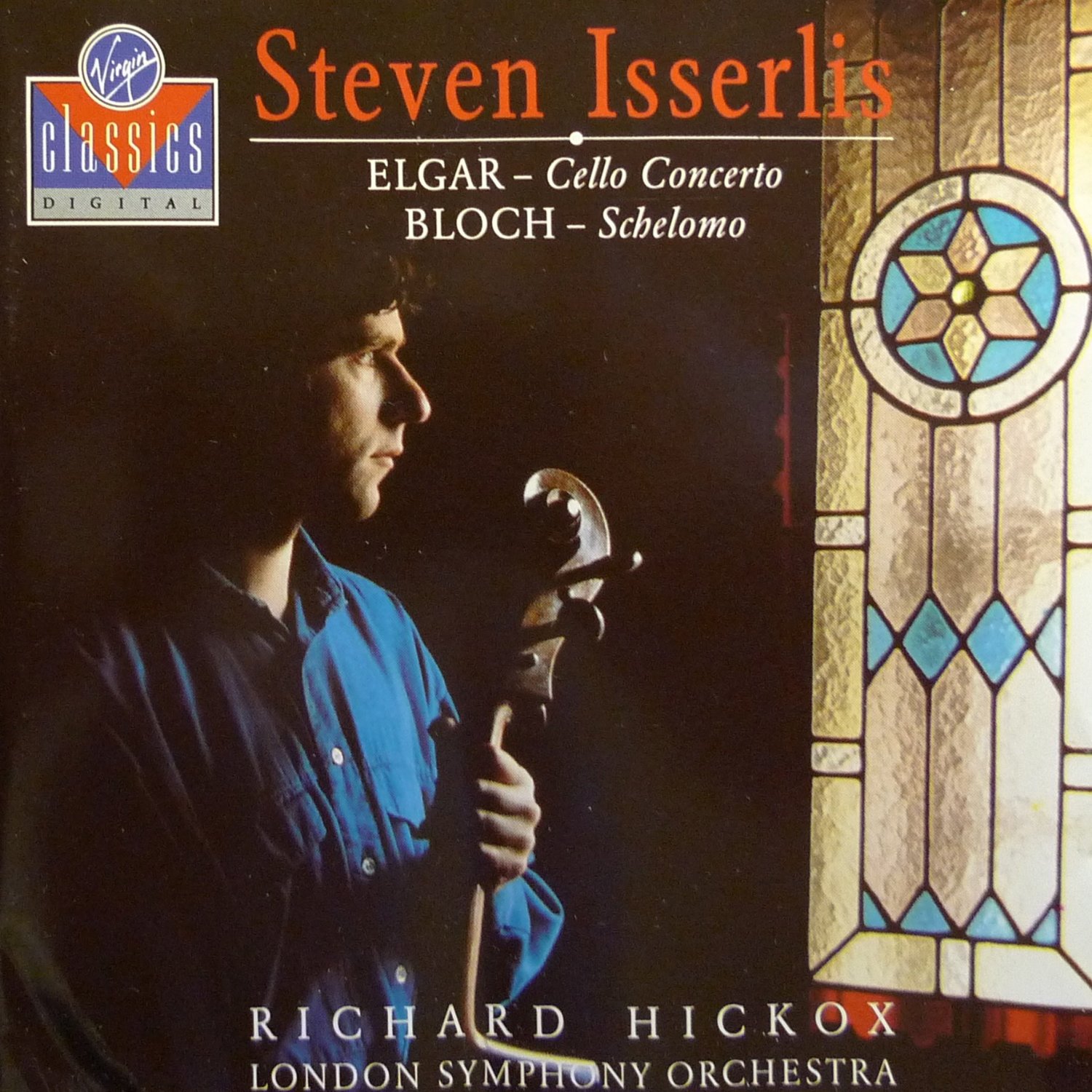 Cellists are apt to ‘come of age’ in recordings of the Elgar. Isserlis was no exception. This is a wonderful account of the Concerto – brave, imaginative, individual – indeed, quite the most personal in its perception of the piece since the treasurable du Pré. And that, you’ll appreciate, is saying something, though not, we hasten to add, that the two readings are in any outward sense similar. Far from it. With Isserlis, the emotional tug is considerably less overt, the emphasis more on shadow and subtext than open heartache. Yet the inner light is no less intense, the phrasing no less rhapsodic in manner than du Pré. On the contrary. This is free-range Elgar all right, and like du Pré it comes totally without affectation.

Both Isserlis and du Pré take an appropriately generous line on the first movement’s sorrowful song, with Isserlis the more reposeful, the more inclined to open out and savour key cadences. The Scherzo itself is quite simply better played than on any previous recording; the articulation and definition of the semiquaver ‘fours’ would, we’re sure, have astonished even the composer himself. From a technical point of view Isserlis is easily the equal, and more, of any player currently before us. And if you still feel that du Pré really did have the last word where the epilogue is concerned, then listen to Isserlis sinking with heavy heart into those pages preceding the return of the opening declamation. He achieves a mesmerising fragility in the bars marked lento – one last backward glance, as it were – and the inwardness of the final diminuendo is something to be heard and remembered. Hickox and the LSO prove model collaborators. Don’t on any account miss these performances. 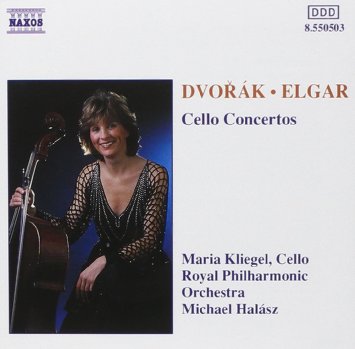 Coupled with Dvořák Cello Concerto in B minor, Op 104 B191

The technical accomplishment of Kliegel’s playing is balanced by a richness of musical insight that won’t disappoint. The boldness of the opening soliloquy recalls du Pré at her finest, and yet Kliegel shares a yet deeper cup of grief in the world-weariness of the main first subject, carried with noble conviction. She takes a more improvisatory view in the lilting second group than du Pré.

The Scherzo is brilliantly done, and at a very fast tempo, but conductor Michael Halász overlooks Elgar’s precisely noted a tempo indication in response to the soloist’scantabile largamente statements at the end of each main section. The effect isn’t only tedious, but is quite the reverse of the composer’s intention, clearly stated in the score. The Adagio is thoughtfully played, avoiding unwelcome posturing or empty affectation, though Kliegel is, if anything, a little too cool and dispassionate here.

The finale is superbly paced, with the rumbustious militarism of the orchestration never allowed to dominate. The recording was made at Henry Wood Hall, and is full-bodied and emphatic in major tuttis, yet one might have wished the overall balance to favour the soloist more than it does. 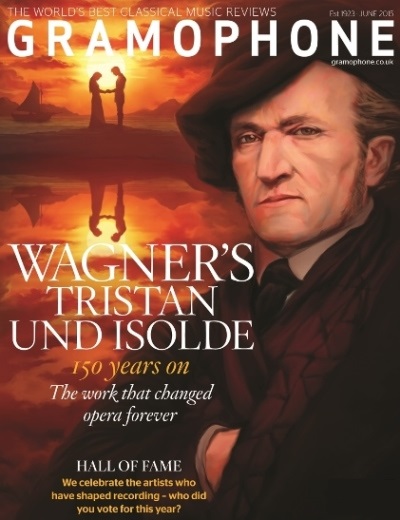 The Elgar and Walton cello concertos make a perfect coupling and this is the second time André Previn has conducted the pairing on disc. The first, in 1984, had Yo-Yo Ma, still near the beginning of his career, and the LSO. Here he’s with the young German cellist Daniel Müller-Schott and his own Oslo Philharmonic in an equally idiomatic reading.

Significantly, Müller-Schott writes his own booklet-notes, demonstrating his warm affection for and understanding of both works. It is the passion of his playing that strikes home immediately – he uses a wider vibrato than Ma, and rather freer, less inhibited phrasing. That passion comes over not only in the slower music of the Elgar but also in the seemingly hesitating introduction to the second-movement Scherzo; and where Ma’s reading of the slow movement is marked by refinement and nobility, Müller-Schott’s is weightier. Similarly, in the central Scherzo of the Walton, where Ma is very fast and volatile, Müller-Schott is heavier-handed, though without losing the piece’s sparkle.

The solo cello is balanced very far forward so that at the start of the Walton its sound obscures the subtle detail in the orchestration. That said, there is everything to enjoy in performances that are uninhibited, bringing out the warmth of both pieces. Many will forgive the odd balance when the performances are so convincing, even if Müller-Schott is not quite so imaginative or individual in his phrasing as Ma. 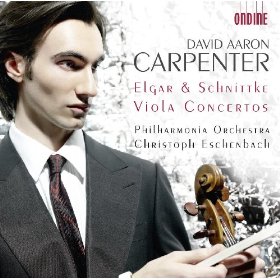 In a recent interview, Carpenter spoke of his desire ‘to put [the viola] out as a major solo instrument to rival the violin and cello’, an aim which chimes with that of Lionel Tertis when he fashioned his transcription of Elgar’s Cello Concerto in 1929. Tertis’s clever makeover has now, in turn, been overhauled by Carpenter, yet the finished article still runs the risk of pointing up the music’s exquisite, truly classical economy, deftness and poise at the expense of its aching intimacy, nostalgic glow and irresistible physicality. Nor will everyone warm to the enforced changes of register within Elgar’s seamlessly conceived solo part. Carpenter gives a commandingly articulate display, and the Philharmonia are on immaculately scrubbed form under Christoph Eschenbach’s thoughtful lead.

Carpenter’s choice of the powerful Schnittke Concerto calls to mind Pieter Wispelwey’s adventurous pairing of the Elgar and Lutosławski cello concertos (Channel Classics). Written for Yuri Bashmet in 1985, it is an excitingly intrepid and deeply sincere creation, as provocative in its wild extremes of mood as it is intriguing in its fruitful juxtaposition of old and new. However, such is the work’s emotional clout and cumulative impact, you’ll surely keep coming back for more. It helps, too, that Carpenter plays with superlative assurance and magnetic conviction, and he is backed to the hilt by Eschenbach and an audibly fired-up Philharmonia. Ondine’s dryish sound and somewhat analytical balance suit Schnittke better than Elgar. All told, an impressive and bold debut.

A fine modern version from one of the UK’s most accomplished young cellists. It combines imagination and poetry with a wonderfully expansive view of the work.

Wispelwey is acutely alive to the strong strain of classicism that runs through Elgar’s autumnal masterpiece. An unforced, deeply satisfying reading, with splendidly bright-eyed orchestral playing.