James Jolly pays tribute to one of the most-recorded conductors of all time, Sir Neville Marriner, whose 90th birthday falls on April 15 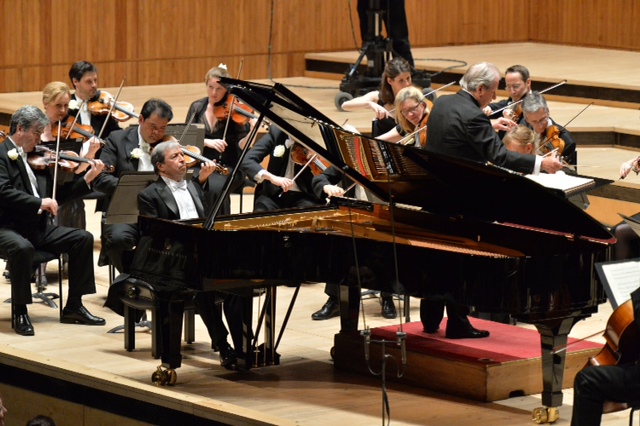 A few weeks ago BBC Radio 3’s Free Thinking devoted a programme to a discussion of charm – who was charming? How was charm used (or misused – usually by politicians). I was listening with a friend who asked ‘Did I know anyone charming?’ I thought for bit and came up with the answer ‘No’. Before lunch the next day I was on the phone, ‘Yes, I do know someone charming’ – I’d just been to interviewing Sir Neville Marriner (for our July issue).

Sir Neville turns 90 today and remains as sprightly, charming (!) and entertaining as ever. He’d just returned from four weeks conducting in Japan and China, a schedule that would be daunting to someone a good 20 years younger, and he continues to conduct and record with seemingly endless reserves of energy.

I’m sure I’m far from alone if I say that Marriner and the Academy of St Martin in the Fields has been part of my musical life for as long as I can remember. The partnership was a brand before that word was elevated to the cliché it has now become; it ensured orchestral playing of a superior kind, solo work that was invariably a cut above the norm and a level of energy that nearly always created an excitement for the listener. In short, the ASMF/Marriner brand delivered…

Here, on this major anniversary, are nine Marriner recordings (one for each decade of his life) that stand the test of time and demonstrate the remarkable breadth of this conductor’s musical sympathies, sympathies that are as broad as that other consummate record-maker Herbert von Karajan, Marriner performing more Baroque and Classical repertoire, Karajan more big Romantic and opera. 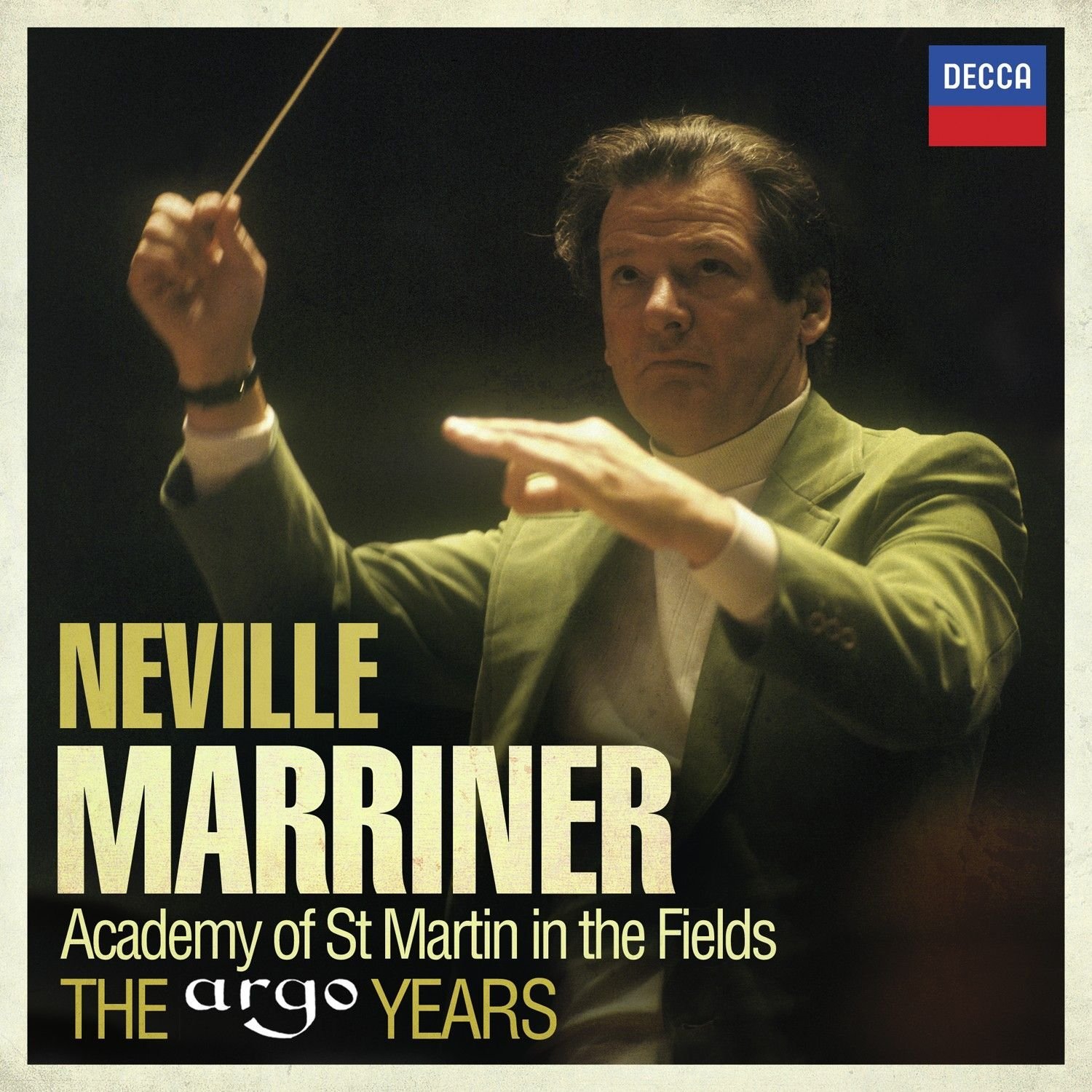 Just out, in time for the birthday, is a 28-CD set called The Argo Years: I’ll be writing about it in more depth in a forthcoming issue but suffice it to say that it’s full of gems running from the ASMF’s very first recording (concerti grossi by Corelli, Torelli, Locatelli et al) to a trio of programmes that first came out on ASV. To single out just four of the 28 discs, there’s a lovely disc of Stravinsky (Pulcinella Suite, Apollon Musagète and Capriccio with John Ogdon) that has languor where needed and angularity too. Another disc links Strauss’s Metamorphosen, Wagner’s Siegfried Idyll and Schoenberg’s Verklärte Nacht – it shows the ASMF strings at their finest. Two small symphonies, Bizet’s and Prokofiev’s Classical simply sparkle and, for something more mellow there’s a glorious programme of Barber, Ives, Copland, Cowell and Creston and a final mention for Marriner’s disc of the two Weber symphonies, done with lashings of charm (478 6883DC28). 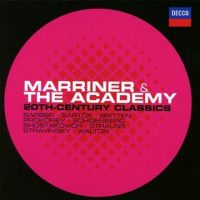 In many ways, ‘The Argo Years’ supplants an earlier 10-disc set called Marriner and the Academy: 20th Century Classics which I pounced on at its release and which actually forms the backbone of the newer set. If you find the ASMF’s way with music of the Baroque a little bit dated (though it’s still very stylish and full of energy), this may be the one for you.

Long a favourite of mine is a disc that the ASMF now share with the English Chamber Orchestra that includes a heavenly performance – by Marriner’s père et fils – of the Finzi Clarinet Concerto. They find the ideal balance of poise and lyrical ebullience and also add the rarely heard Nocturne for good measure.

Marriner came late to operatic music but made up for things with a Barbiere di Siviglia that bubbles along with a terrific sense of theatre – Agnes Baltsa plays Rossini’s minx of a heroine with great flair and she’s joined by Francisco Araiza (Almaviva) and Thomas Allen (Figaro) in a cast that’s well chosen and who throw themselves into things with terrific abandon. 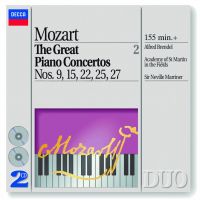 When Alfred Brendel embarked on a Mozart piano concerto cycle (he was rather reluctant at having to learn the early ones, Sir Neville revealed to me), Marriner made a stylish partner and there are numerous different couplings of these ever-inventive works. I’d suggest Volume 2 of the ‘Great Piano Concertos’ on a Philips Duo: it includes Nos 9 (K271), 15 (K450), 22 (K482), 25 (K503) and 27 (K595). And if you enjoy them as much as I do, you can go after all the others. 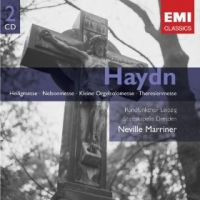 From Marriner’s EMI catalogue, a favourite of mine that doesn’t employ the ASMF, is a two-CD set of four Haydn Masses – Heiligmesse, Nelson Mass, Kleine Orgelmesse andTheresienmesse – that are distinguished by some very classy solo singing (Carol Vaness, Margaret Marshall, Carolyn Watkinson and Robert Holl are among them) and some fine playing by the Staatskapelle Dresden. 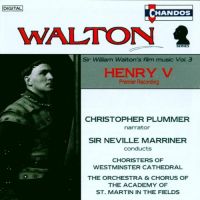 A Chandos disc of Walton’s Henry V music finds the ASMF expanded beyond its usual size but playing with a great sense of atmosphere and Christopher Plummer delivers the Shakespeare speeches with huge authority. Needless to say, it’s beautifully recorded. 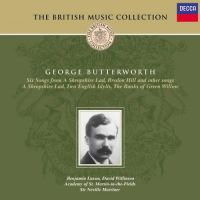 A timely reminder in this the centenary of the start of the First World War is a collection of music by George Butterworth who was killed in 1916. A terrible loss to the musical world, Butterworth’s intense and deeply moving language emerges strongly on this lovely record (A Shropshire Lad – with Benjamin Luxon, Bredon Hill, A Shropshire Lad Rhapsody, Two English Idylls and The Banks of Green Willow make up the programme). 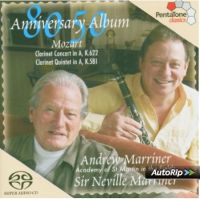 Another disc of Marriner father and son celebrates a double anniversary from exactly 10 years ago (Neville at 80 and Andrew at 50): Mozart’s Clarinet Concerto full of vitality and song (it’s coupled with the Mozart Clarinet Quintet). 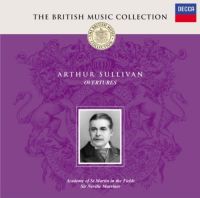 A final mention for a delightful collection of overtures from Gilbert and Sullivan operettas – playing full of fizz and character. What inventive music Sullivan's is, particularly the really master curtain-raiser to The Yeoman of the Guard.

This list merely scratches the surface, and everyone has his or her own favourite: given Sir Neville’s extraordinary energy I’m sure there’ll be plenty more! Happy 90th Sir Neville.